Demos at Australian High Commission in London and outside the London headquarters of mining giant BHP Billiton in solidarity with opponents of expansion of Olympic Dam uranium, copper, gold and silver mine in South Australia occurred on July 13th. Groups taking part included Kick Nuclear and London Mining Network. 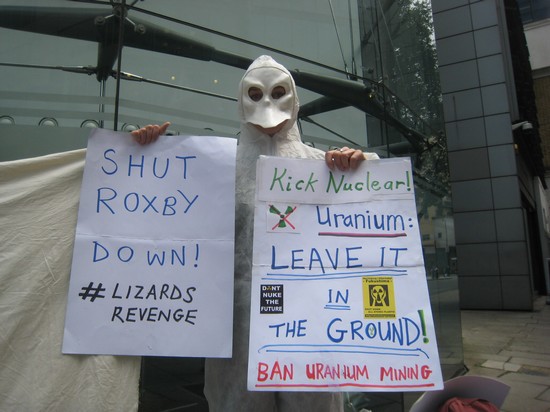 International public opinion,
To whom it may concern,

With great concern we feel the need to inform you about the way millions of Mexicans feel regarding the countless irregularities that have occurred during the electoral process in Mexico.

This is a military agreement, developed in secrecy by the governments and military chief of both our governments, that will allow the deployment of Australian military forces on Philippines territory for "combined training, exercises, or other activities mutually approved by the Parties".

This military deal is an attack on the peace, freedom and independence of the Filipino people, and the other peoples in Asia.

We understand that under this agreement, the Philippines cannot exercise primary jurisdiction over visiting Australian military personnel accused of a crime or other breach of the law if the Australian military claims that the action concerned was carried out in performance of an "official duty".
Related: Protests hit Phillipines-Australia Military Deal

On 23 June 2012 on the Iberoamerican Plaza next to Central Station, Sydney, 40 people gathered as a community in solidarity with the people of Honduras against the continued political killings, human rights violations and environmental exploitation that has been driven by an internationally coordinated military coup since 28th June 2009. The coup was to ensure conditions to allow business to do whatever they want without regard for human lives and the environment.

Today, as we commemorate the first anniversary of the adoption of ILO Convention 189 (C189) on Decent Work for Domestic Workers, we call on ILO Member States to immediately ratify and implement C189 as a demonstration of their global commitment made at the 100th Session of the International Labour Conference on 16 June 2011.

Ratifying C189 is important, urgent and a priority! Wide ratifications of C189 would benefit an estimated 100 million domestic workers around the world who for long have been unrecognized, neglected, and forgotten.

Since the fateful eviction day of the 21st of October 2011, the diaspora of those who participated in or bore witness to Occupy Melbourne have continued to engage with the global Occupy movement in a multitude of ways. Many have remained close to those networks that were cemented in the City Square occupation, others have moved on to new activist projects, returned to old projects, or possibly dissociated themselves from the Occupy Melbourne protest altogether.

There was a sudden surge of political killings during May. There were at least nine political assassinations.