Historic House at 13 Highview Lane, Neutral Bay, to be demolished in October 2015

In just a few weeks, the early 20th Century Federation bungalow at 13 Highview Lane, Neutral Bay, also known as 1 Premier Street, will be demolished, to be replaced by a five storey hulking cement and aluminium monstrosity, another blight on the landscape of this historic suburb.

The approval process has taken over a year, no doubt due to strong objections from residents of Neutral Bay, a suburb full of historic houses from the early days of settlement. It is said that the process began ten years ago.

In 1789, Governor Phillip declared the area to be a neutral harbour, where foreign ships could anchor and take on water and supplies. Some of the surviving houses in Neutral Bay date from the 1820s and include May Gibbs' home, “Nutcote”.

This house and garden should have been protected from such a wicked and dishonourable end – but it wasn't. I don't know the history of the court action in the Land and Environment court, but I want to thank those who tried to save it from destruction.

The photos below give an idea of the exent of loss to the area. The house has been divided into five small flats in recent years, but the original gardens, with sandstone steps and a lookout, have been preserved, though overgrown.

Countless lizards and other wildlife, protected by the gardens, will die. Plant lovers wishing to save tree ferns and other native plants will find the phone number of the developer on a notice at the front and back gates.

Residents of the house refer to the grounds as the Secret Garden due to the many paths, steps and interesting built features, as well as original sandstone rocks that were left where they stood for thousands of years.

Check out the photos of the house and gardens.

How many more houses, a century old and more, will be permitted to be torn down in Neutral Bay? If it weren't for the Builders Labourers Federation in the 1970s, there would be nothing left of The Rocks and the Botanic Gardens would now be a carpark for the Opera House.

Who will defend the historic buildings of Neutral Bay? 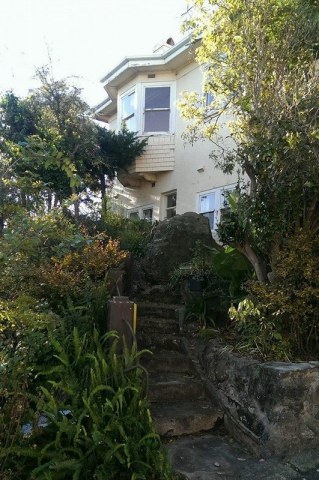