If you eat food, maybe you've noticed groceries costs more and more. Well stock up now, food inflation is just ramping up. It's not just the extra 200 million mouths to feed on the planet next year. Climate change is already re-arranging your food bill. Learn how cities can start feeding themselves - in just one year! from Lamanda Joy in Chicago.

A series of reports in the Australian press say food prices there will hit a new record high in 2013. The cost of rice, wheat, pulses, edible oils, sugar and vegetables, are all rising in India.

In the United Kingdom, the November Shop Price Index shows food prices up 4.6% from a year ago. Fresh fruits and vegetables are particularly high, causing what the Guardian newspaper calls "a nutrition recession" in Britain.

In North America, and around the world, one big driver for rising food prices is the record drought in the prime crop production areas of the United States this year. Many meat producers gave up, selling off their herds, temporarily keeping meat prices lower. The current cattle herd is the smallest since 1973. Once that sell-off goes through the supply chain, the high cost of corn and other grains will accelerate meat prices from 5 to 10% higher, according to one Canadian report.

Here is Peter Mansbridge of host of "The National" on Canadian Broadcasting Corporation on December 6, 2012.

"If you are buying extra groceries for the holidays, some experts suggest you also might think about stocking up for the coming year."

"According to the University of Guelph's annual food forecast, just about every basic staple will cost more next year. Dairy up as much as 3%; bread up as much as 4%; eggs up as much as 5%; but likely the biggest hike... 'We would expect meat, particularly beef and pork to go up more significantly. We are saying probably as much as 4 and a half to 6%.' The price of pork in particular expected to jump by as much as 10%.

According to the report the main driver behind most of these price increases is climate. The drought across North America this past year was one of the worst in recorded history. Among the hardest hit areas, the Great Plains states in the U.S. - America's bread basket. That drove up grain prices and in turn, the cost of feed and livestock." ...

...For those unwilling to go vegetarian, 'Fill the freezer now, because it's going to get tougher going forward.'

And, he says, if you are wondering how accurate the University's predictions are, last year the forecast was bang on."

Host Peter Mansbridge: "So some predictions there about food prices in the future. What about the prices we've already seen? Here are some numbers to consider. According to statistics Canada, the cost of meat has risen more than 30% in the past decade. Egg prices have risen by 50%. Bakery products are up by nearly 60%. By comparison, fresh vegetables cost about 1% less than 10 years ago."

THE COST OF FOOD IS PUNISHINGLY HIGH AROUND THE WORLD

Don't be thrown off by comforting reports from the United Nations Food and Agricultural Organization. Their early December report says basic food prices fell by 1.5% in November. That was partly caused by a massive drop in the price of sugar.

Bloomberg business finds American meat prices are set to go much higher. Quote from Bloomberg: "The drought in the Midwest and Great Plains drove corn yields to a 17-year low and may last at least through February. U.S. consumers will pay 3 percent to 4 percent more for food next year, a half-percentage point above this year’s expected increase, according to the USDA."

It's not just the drought. A weird bout of summer-like weather in March of 2012 caused many fruit trees to bloom early. The return of cold weather killed off the flowers, leading to a drop of the apple crop by as much as 80% in some regions. The world charity Oxfam has a special report on the impact of extreme weather events on the world food supply.

Wait a minute! Didn't I promise you some good news this week?

Sure, if more people can't afford red meat, their health will improve dramatically. Healthy vegetables are still the most affordable option in most places.

But it gets much better than that. We can quickly and cheaply convert most of our major cities into major food production centers. In this program, you will hear how it happened before. And how local urban food production is making a rapid come-back. The kicker is lots of folks are going for more than just the joy of healthy self-grown food. They come for the new sense of community as well.

Most of us can't afford to just kick-off and head to the country. We need some income, at least to make the transition. So like Havana Cuba, after the Soviet empire died and stopped sending oil, we'll have to feed ourselves where we are.

We are going to the City of Chicago, where the American Victory Garden movement was launched during World War Two. And where it is coming back strong. From the Great Lakes Bioneers conference, we have an excellent recording of Lamanda Joy, founder of the Peterson Garden Project. She'll tell us about the Victory Garden movement, where hundreds of thousands of novice growers produced mountains of food for the War effort. How a whole nation can transform into local food production in just one year.

Inspired by all this, Lamanda Joy and her community set out on a campaign of "one percent". The aimed to achieve just 1% of the accomplishments of the World War Two Victory garden movement in Chicago. She found donated space, and got municipal support. Her first organizing meeting was attended by over 50 people. Since then, the "Peterson Garden Project" has grown into a network of Chicago community gardens. Last year in Chicago there were 2600 gardeners on 690 plots.

That's not just something that happened in the past. Lamanda will tell us how Chicago is organizing once again, to bring back urban food production. Whether you are concerned about economic collapse, climate change, peak oil, or just healthy food - this speech is a message of hope for all of us.

This recording was made by Kelly Pierce of the Chicago Independent Media Center for Radio Ecoshock. 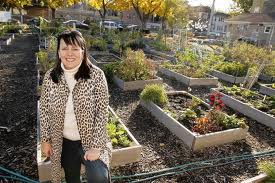