The Forest Products Commission are currently attempting to decimate the largest intact numbat colony in our state at Warrup forest. There are more pandas in the wild in China (1600) than numbats in Western Australia (under 1000), and the numbat is our state fauna emblem.
"It is disgusting in this day and age that the Barnett government have scant disregard for our state emblem, which is on the brink of extinction. How will we explain to future generations that we stood idly by while the FPC destroyed the last major colony of numbats." - Forest Rescue spokesperson Simon Peterffy.

There have been numerous sightings of numbats throughout the proposed logging coupe and activists are now preparing a legal injunction to have the numbat colony saved.

Last week this numbat was spotted and photographed a few metres from a major logging road in the Warrup forest. "Every working day it is in danger of being skittled by a logging vehicle while this dodgy operation continues." Sais Mr. Peterffy. "For more information on how to get involved with the campaign call either myself (Simon) on 0422 535 328 or Amy on 0428 048 632." 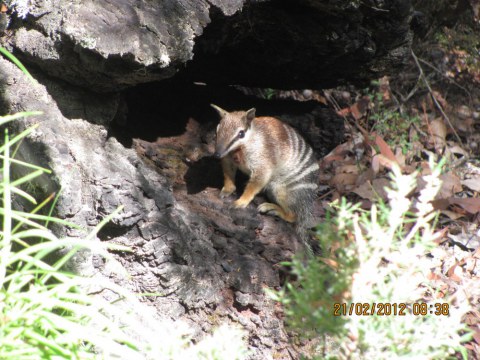 Darren B should learn how to spell meat.

Sorry Simon, you're wrong again. Sustainable harvesting does not and will not "decimate" the numbats, nor the cockatoos, nor the forest. You can nominate any species of fauna or flora you like, but the fact is, long term studies have proved once again that biodiversity in our native forests is not threatened by harvesting, and in some cases is actually enhanced. Our forests will be here long after you and I have departed this earth, continuing to provide the multiple uses for which they are famous. Can I suggest you and your friends find another more useful cause to which you can direct your energies, such as encouraging more trees to be planted in our wheat and sheep belts. That's where biodiversity is lacking. You could even try your hand at making cockatoo nesting boxes for wheat/sheep farmers. That would be doing something useful, rather than continuing your ego trip at the nearest FPC harvesting operation, or jumping on the nearest whaling ship.

Why has the numbat become scarce Simon? because its lands were cleared for agriculture and the feral fox was introduced to the State.

Let's face the facts Simon no species is recorded as becoming extinct as a result of forestry in WA. The forests have become the last refuge of many vulnerable and rare species. Your actions aren't saving anything. As said above why not don't you put your considerable energies into more constructive measures that would actually help the flora and fauna of the State.

Get real axel. You say "they survived in areas managed for timber production" as though it was the logging industry that saved them? You then go on to say "the forests have become the LAST refuge of many vulnerable species". You do see the irony in what you are saying right? You accept these patches of native forest as being the habitat of what few numbats are left, but you seem to think that knocking down the trees they rely on is going to help them? You are completely backwards.. have you ever seen this sort of harvesting in action? It isn't selective, that word is a farce. It is destructive. Short term profit for long term devastation.
People need to break out of this mind set that sees them feeling asthough knocking down the last 2% of native forest is ok. Did you know that since the creation of the FPC it has costed the state government (you and me) 120 million dollars.
$250,000 odd for 1000 acres of priceless forest.. That will pay for 3 lollypop men to stand on the side of the road for 1 year. Put things into perspective and wake up...

Barnett doesnt kill numbats...other corrup people do that 4 him

I think that due to the numbats threatened and vulnerable nature, due to feral cats, dogs, humans and hydraulics, and thier particular role in this states very self-concious self-image, we should be doing EVERYTHING within our meagre powers to prevent another shy little beauty from being futher marginalised. I would imagine that it has been due to the help of the breeding programs and feral animal batings, that these little critters havn't fallen off into the neather like good honest debate seems to have..
When someones life is threatned or in a vulnerable state, our bodies shut down all but the critical and most vital life support functions, so as to wholly focus on survival and recovery.. Now those whome it has befallen apon, have an obligation to, like a recovering patient, to safe-guard the "last refuge of many vulnerable and threatened species"
It is a little known science, however a scientific fact that wildlife corridors must be continuous, (best not degraded), and of a certain size depending on the ecosystem.
The Warrup forest coups could provide the 'GREATER KINGSTON NATIONAL PARK' with the specifications to allow an intact ecosystem to retain biodiversity and maintain itself....
However the wisdom of the current R.F.A. (Regional Forest Agreement) seems to fall short in noting this fact, so far short that the Warrup coups have been earmarked for 'SELECTIVE LOGGING PRACTICES'..
practices which, despite the championing of certain government employees, SIGNIFICANTLY DEGRADE the value of bushland..
I cant possibly comprehend how dragging hundred+ year old trees through the undergrowth, pulverising the smaller undergrowth, into the dusty tracks of a six tonne levithian could possibly be in the best interest of the vulnerable, threatened and endangered wildlife that has only just began to make a comeback to those area's!?
BIODIVERSITY IS THREATENED IF ANY SPECIES IS THREATENED!
It is the co-existence of all species within an ecosystem that creates bio-diversity!
If one species is removed from that equation the ecosystem is less bio-diverse
Everything should be done in our powers to prevent the loss of Biodiversity on this planet...
why not starting with our backdoors... the state forests
More needs to be done to show the public and ensure to them that the vulnerable numbat, threatened cockatoo are not going to be lost.
The Forest Products Commission, who have been granted caretaker status over our collective interests within the states forest, should heed the calls for a moratorium, to cease the operations within Warrup 06 so that independant studies can be made on the plight of our state embelem...
If that means that the conracts given out for the logs to be hauled away from there needs to be re-drawn so as not to put out the all importaint econnomics, then the Forest Products Commussion should be flexible enough to account for that!
If that means that for the continuation of the ecosystem that sustains a mature population of threatened and vulnerable species, one of which happens to be the Western Australian State emblem, that the Warrup coupes be ADDED to the KINGSTON NATIONAL PARK to ENSURE thier survival....so be it!