Veterans group says President Obama not welcome down under

MEDIA RELEASE, 2 June, 2010 - Stand Fast, the Australian-based veterans group which is comprised of veterans and former military personnel who oppose the wars in Afghanistan and Iraq, is calling on all people of conscience to protest the upcoming visit of Barack Obama in mid-June.

"Why should we welcome a war criminal?" asked Stand Fast spokesperson and East Timor veteran, Hamish Chitts. "Obama is not a force for progress, he is not a man of peace - from his first day in office he has firmly placed himself in the camp of the warmongers and war-profiteers."

"Why should we welcome someone who has overseen the destruction of thousands of civilians and soldiers' lives in wars that most people in this country do not agree with," Mr Chitts said.

When George W. Bush visited Australia in 2007 tens of thousands of people took to the streets to protest against these wars and Bush's leading role in them.

Obama has not only inherited the command of these wars but he has expanded them. In his first year in office, he broke several war-making records of President George W. Bush â€" with the largest military budget in U.S. history and the most drone attacks on the most countries.

"Obama has reneged on his promise to withdraw troops from Iraq. In Afghanistan he has more than doubled US troop numbers, he has pressured other occupying nations to increase their troop numbers and has doubled the number of mercenaries.

"Most of the Australian casualties of Obama's wars are hidden, they are psychological and the negative impact is not just on the veterans themselves, but on their loved ones, their children and their communities. As veterans we know the war does not end for us when we come home," Mr Chitts said.

Politicians are happiest when we stay at home complaining to our friends or on the internet.

Stand Fast calls on ordinary people to take to the streets in June, in Canberra and Sydney and in cities Mr Obama won't visit - to remind him and the warmongers in this country that the anti-war majority demands troops out of Iraq and troops out of Afghanistan now. 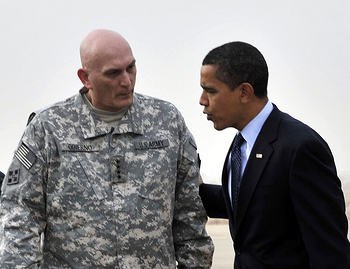 Re: Veterans group says President Obama not welcome down under

The real war on terror is begun, but the people of the USA don't yet recognize the players.

Imagine that a mafia type moves into your neighborhood, subtly sets himself up as a kind of authority and pseudo friend to those who bow to him. He becomes in time a protector to his followers and an oppressor to those who refuse his orders. Ultimately, as this mafia figure has the backing of the ‘organization’ , all persons in the neighborhood realize that the best course to maintain peace in the home is to subscribe to the mafia’s doctrine and at the same time pretend that all is for the greater good. Many are then rewarded for their loyalty to the mafia lord.

Now, this is the scenario today on the world stage with the fbi/cia/pentagon (and their minions, stooges,shills, thugs,punks,assassins,operatives, agents,informants,and police/national guard Gen d’armes), all acting as mafia type figures.

For purposes of this report the main focus is on the dual disciples of satan, the fbi/cia, as mafia, and on their demand that all the world accept the new world order as defined and as enforced by their organization (i.e.: the war machine). Those who surrender their persons and countries unto the authority of the fbi/cia mafia are rewarded (first by not being killed or imprisoned, followed by some temporary economic benefits to the country’s ruling elite). Those who resist or fight the terrorists of the fbi/cia mafia are hunted down like dogs and are killed. Thus, the real war on terror takes on a very special meaning to all who are affected by the aggression of the most dangerous and bold group of blood thirsty killers ever to live on the planet earth: the fbi/cia mafia and their associates and facilitators throughout society.

Today the people of the world recognize that as the fbi/cia gang represents the failed leadership of the United States of America, and that this nation is thereby a homicidal menace to Humanity because the fbi/cia’s war machine continues the assault on the world’s population with threats, armed invasions, and ultra high tech weaponry (including mind control and brain entrainment gadgetry) and by whatever other methods be available in their arsenal.

Now a clear and present danger to the peace and stability of all peoples is apparent; unless stopped now the future of mankind is in great peril with regard to human and civil rights, individual liberty issues and freedom from oppression.
The sentiment grows around the globe to stop the invaders of the fbi/cia gang . The mantra of the freedom fighters may be summarized in a simple but universal expression of rage as follows and the war on terror has hardly just begun:

Invade My Country, I Invade Yours;
Attack My Brain, All Bets Are Off.