Many of those present were constituents of Martin Ferguson's electorate of Batman. It was also noticeable the level of support given to the protest by drivers on High Street. While Martin Ferguson occupies on of the safest Labor seats in Australia, it is plain he is out of step with many of his electors over the nuclear waste Dump.

Under a huge inflatable white elephant speakers told the story of Martin Ferguson, the Minister for energy and resources imposing sweeping powers to over-ride state and territory laws and to bypass federal environmental and aboriginal heritage laws.

Many of the indigenous Ngapa people and traditional owners from other Muckaty groups oppose the nuclear dump. Even the NT Labor Conference in April 2008 called for the exclusion of Muckaty on the grounds that nomination "was not made with the full and informed consent of all traditional owners and affected people and as such does not comply with the Aboriginal Land Rights Act."

Dave Sweeney, nuclear campaigner with the Australian Conservation Foundation said "One of the most pivotal fundamental things for a responsible and effective long term radioactive waste management regime is to have a high level of community consent and social licence. You don't do that by passing legislation that cuts across people's rights, that overides state and territory laws, that takes away peoples rights to go to court and seek procedural or legal redress or recourse."

"You don't do that by not meeting with people, not consulting with people. You don't do that by having confidential documents or commercial in confidence and you refuse to release to the Australian people, the Australian parliament, or most insulting of all, traditional owners whose family names will be on that document and who do not know that contents." said Dave Sweeney.

Dave sweeney held up a poster from Labor's 2007 election campaign in Darwin. "I brought along a piece of history today to remind us, but above all to remind minister Ferguson. ... Labor targeted that seat on the dump campaign. He lost that seat over the dump campaign. 'Stop Tollner's Nuclear Dump Vote Labor'," he said, "Well, what has changed? Peoples opposition hasn't changed. The hazard posed by radioactive waste hasn't changed. The lack of consultation, courtesy, respect and courage hasn't changed. The name of the minister driving the process has changed. And thats all. Martin Ferguson is in breach of Federal Labor's policies."

Solidarity of standing with the unions in the Northern Territory who have opposed the dump and with the traditional owners was also expressed by Jacob Grech who concluded his speech defiantly "We will not let it go ahead. We will stop it. We will do whatever it takes to stop Martin Ferguson, or whatever other Labor Party lackey replaces him after he loses the next election, to make sure that it is not allowed to go ahead. By doing it the only way we have ever won anything here. We will put our bodies in the way, we will put our lives in the way. We will stop them proceeding."

Other speakers included Madeline Hudson from the Friends of the Earth Anti-nuclear and Clean Energy (ACE) campaign, and a trade union activist visiting from Columbia who raised and drew comparisons with the issues of mining, pollution and corporate thuggery by the likes of BHP Billiton, Coca-Cola and Monsanto in Columbia. But it wasn't just speakers. Casey performed a rap song she had composed which was enjoyed by all. And the crowd was also entertained with some street theatre with 'Martin Ferguson' returning to his office with a Muckaty report only to be splashed with some bright green 'radioactive' waste. 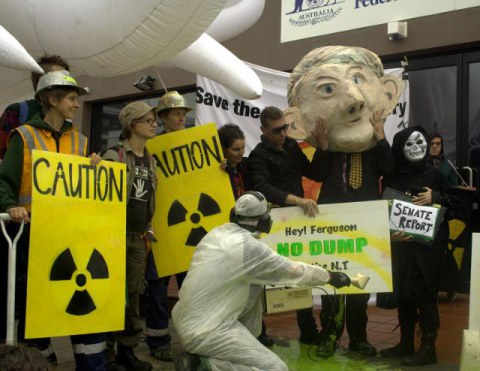 Re: VIDEO Protesters slime the office of Federal Resources Min..