Natasha Verco, an Australian nonviolent environment activist living in Sweden, and Noah Weiss, an American citizen who lives in Denmark, are facing numerous charges in trials which started on March 16 and 19. Verco, who has organised non-violent direct action with Friends of the Earth Sydney and who has been part of the Climate Justice Action (CJA) network in the lead-up to the summit in Copenhagen, has been charged with organising violence, organising public disorder, significant damage to property, and organising disorder during the international talks on climate change which took place in Copenhagen last year. If found guilty, Verco faces a maximum of twelve and a half years in prison.

Solidarity rallies in Copenhagen and London have been held to drop the charges and all lawsuits. | Action Form | We already gave the Danes a princess - give us back our protestor! | Two climate prisoners released but still facing charges | ABC Radio audio: Natasha talks about her arrest

Their trials are part of a campaign of police repression carried out by the Danish police during the COP15 in which over 2,000 people were arrested within a week of protests. Of all arrested, only around 30 were charged with any crime, and those that were charged were kept in jail for between one week and 47 days without trial. Some have already gone to trial and either been acquitted or received small jail sentences and heavy fines for charges such as assaulting a police officer or throwing a stone. Some have also been deported and banned from Denmark for 6 years. Noah And Natasha are the first two to go to trial of seven accused of organizing demonstrations, and face much stiffer jail sentences (a year or more) then those who have previously gone to trial. The case is being brought on minimal and sketchy evidence, primarily acquired through dubious phone taps and other types of police surveillance.

Speaking a day ahead of the start of the trial, Verco recalled her arrest in a Guardian article: “On December 13 I was riding my bike down by the Copenhagen lakes,and a plainclothes police woman jumped out at me and pushed me off the bike. She took me to an unmarked police van with six or seven plainclothes policemen. I asked them ‘Are you randomly picking me up?’ and they said ‘No, we hunted you’. They held me by myself in an underground carpark for about 16 hours, I think. Then I was taken to Vester prison and held there for three weeks and two days. I was charged the day after I got to prison, but bail was refused because, they said, the investigation was ongoing and I would influence it if I was released.”

Verco and Weiss say they both had their phones tapped, along with 17 other activists, which is legal under recently introduced terror legislation in Denmark. Verco said: “I feel nervous and indignant at the same time, I wonder what the hell they’re going to argue because I can’t see what evidence they’ve got for these charges. And looking back at the calls that they’ve taped, it feels very invasive. Under the new terror laws they can do this, but it seems to me that applying terror laws to activists is steadily eroding the base of our democracy.”

Verco was heavily involved in organising the day of action on December 14, but was arrested before it happened. When it took place, she was still being held by police. “The police say that they prevented anything happening by taking me in. There was no violence, and no disruption of the public infrastructure, because they’d arrested me.”

During the fortnight of talks, dozens of protests from the small to mass rallies of 40,000 people, took place; the Danish police arrested nearly 2,000 people. The police are now processing nearly 200 legal complaints about the treatment of the arrestees. Verco and Weiss were both involved with CJA, the network which helped to organise some of the protests during the talks, most notably the Reclaim Power demonstration outside the conference centre for the negotiations.

Natasha Verco appeared in court on Tuesday 16 March with a heavy police presence at the courthouse. The hearing had to be moved to a larger room to accommodate Verco’s numerous supporters. Also at the court was American Noah Daniel Weiss, who is due to face similar charges on 19 March.

"They are grasping at straws and part of the reason they can do that is because we are foreigners," Natasha Verco said in a Sydney Morning Herald report before the trial.

At the first day of hearing one of the original charges was dropped (“planning to damage infrastructure”) The other charges where changed to “attempted” from “attempted and partially carried out”. The trials might not finish till August. 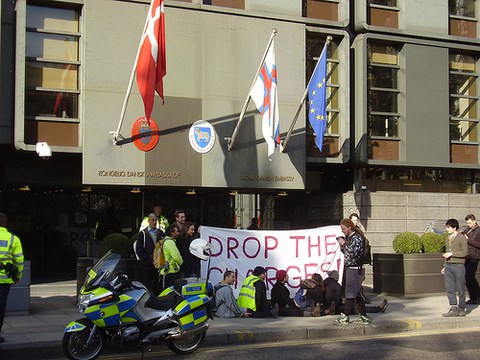