Antiwar activists are holding a two day vigil outside Flinders Street Station to mark the eighth anniversary of the war in Afghanistan. From 8am until 6pm on Wednesday 7th and Thursday 8th October under huge a banner reading, "End the Afghanistan War" they will recite the names of those killed on all sides of the war.

"The government is calling for a surge in troop levels; we're calling for a surge in the anti-war movement," Baptist Minister and activist Rev. Simon Moyle said. "Even General McChrystal has admitted that military solutions cannot win this conflict. It's time to pull our troops out and rebuild this shattered but resilient country."

Australia currently has more than 1500 troops deployed in Afghanistan. According to the latest UN reports, around 400 civilians died in Afghanistan from January to August of this year due to US/NATO air strikes, including one young girl killed by a leaflet drop. Despite the military presence, the Taliban continues to regain control of parts of the country, while corruption holds a firm grip on the US-backed parliament. Life expectancy in Afghanistan sits at just 44 years and more than half of children under five are malnourished. Only 22 percent of the population has access to clean drinking water (UNICEF).

War veterans and church leaders will be part of the vigil, joining the call to end the war.

Rev. Moyle said, "Eight years into this war and things are worse in Afghanistan than ever. How long will we tolerate this horrific loss of human life?" 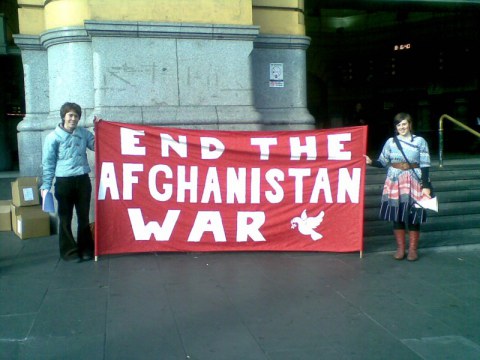 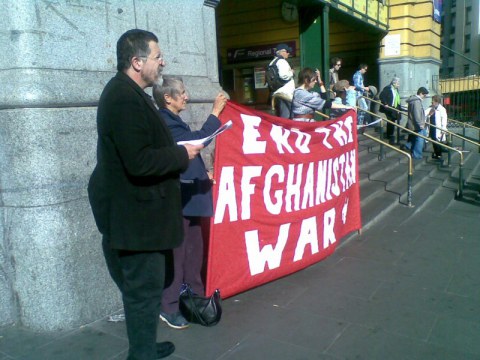 Re: Melbourne antiwar activists call for surge in peace ...

With continuing occupation of Afghanistan, and now with the rehousing of afghani refugees in SA, what does the seduced PM Gillard think is being created. Doesn't she know what goes around comes around... and sooner than we think. Put it to the people in afghanistan. What would/do these people want to occur in THEIR country? The forces in Afghanistan are nothing but modern day colonialist in a disguise, without any sense of why they are there, because there is no sense for being there. Vietnam, here we go again, but this time the people justifiably will rise stronger and stronger against their life, culture, history and heritage being raped, and wasted. How? by retribution. Get the question to the people of afghanistan... 'What would you like to be occuring in your country folks'? Kael.