NZ Green Party MP Keith Locke was one of those who addressed a 500-600 strong gathering outside the Melbourne Town Hall last night at the end of a rally called by the Refugee Action Collective under the banner "Stand Up For Refugees".

The rally began at the State Library with speeches from Adam Bandt,Greens candidate for the federal seat of Melbourne, followed by a representative of the Tamil refugee community who described some of his experiences of arrest and imprisonment at the hands of the Sri Lankan government, after which he sought asylum in Australia. He spent two and a half months in Maribyrnong IDC before being granted a visa. Like the next speaker, Socialist Alliance and Indigenous activist Sharon Firebrace, he drew parallels between Australia's treatment of refugees and the long-standing racism towards the Indigenous peoples; he referred to early 'scientific' speculation as to whether the Aboriginal people of Australia were really human, and saw evidence of the same mindset now towards foreigners. Sharon Firebrace saw a move away from democracy in the growing inequality of treatment of Indigenous versus non-Indigenous, demonstrated most recently in the NT Intervention. Sue Bolton, who was MC for the rally, read a long catalogue of instances where Australia had 'blood on its hands' in its treatment of asylum seekers, including of course the SIEVX.

After the speeches at the State Library the rally took the message to the streets with a very loud march to the Town Hall, where Corey Oakley of the Refugee Action Collective echoed the earlier remark of Adam Bandt that it was, in his words, 'scary that we should be here again' considering that the last election had seen the Howard government thrown out amidst hopes of a better deal for refugees; Adam Bandt began his speech by saying that he wished he hadn't had to be there, for much the same reason. The final speaker, as mentioned, was NZ Green Party MP Keith Locke, and indeed, there was a notable Greens presence throughout, even though the banners of various socialist organisations and the Refugee Action Collective probably outnumbered the green triangles. There were also quite a few 'non-aligned', though obviously not on the scale of some past rallies over the issue.
See: 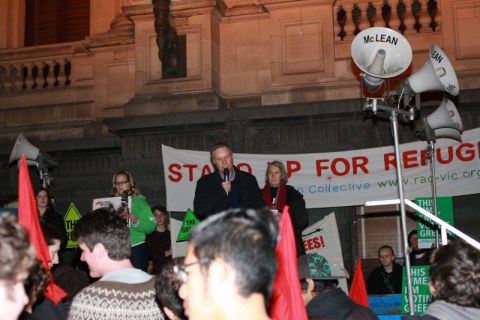 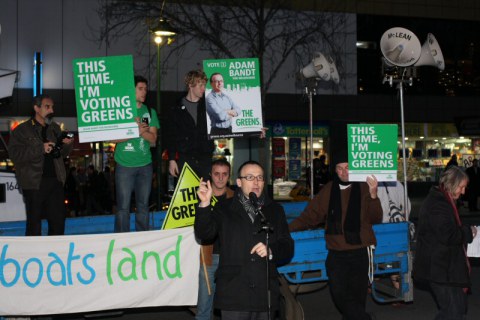 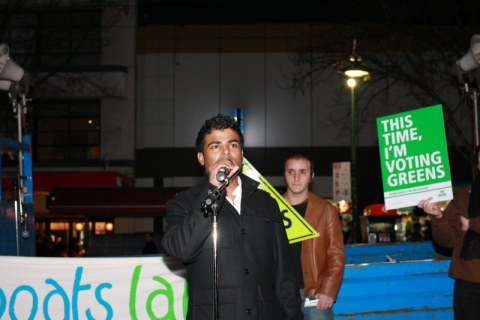 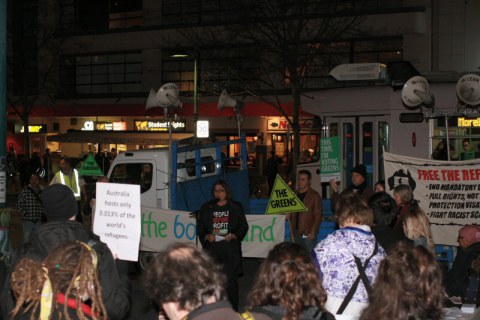 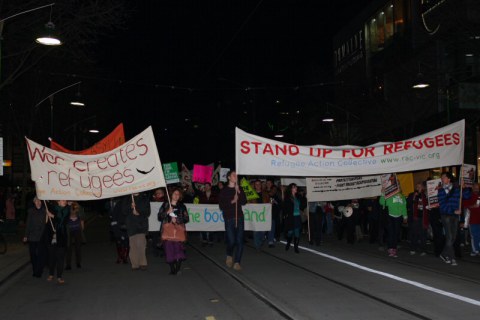 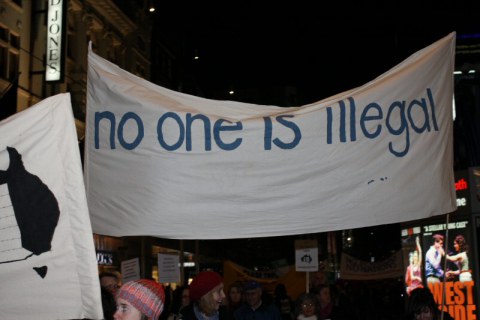 It's a pity that neither of the two major parties has the courage to look the Australian people in the eye and say, "The boats are not a problem. The vast majority of the people who enter Australia illegally or remain unlawfully do so by aircraft. It's a non-issue people."

Of course, neither party articulates a policy which addresses the thousands of 'illegals' and 'overstayers' who land at airports. That's because they're invisible. And, dare I say, not quite so dark-skinned as the very visible refugees in boats.

Funny how such an ostensibly Christian country - potentially led by a 'devout' Catholic - can display such an inherently un-Christian policy towards those whose experiences reflect closely those of their religion's founder.

What we need is real leadership. But that takes courage and at the moment, both parties are craven to the uninformed rabble from the Herald Sun, Current Affair etc set. who complete their sentences with 'but', think Andrew Bolt is the font of all knowledge and wouldn't know the name of the French President.