Victorian Premier John Brumby has announced a feed in tariff for large scale solar thermal power plants to start the transition from coal-fired power to renewables as part of its forthcoming policies for action on climate change. The target of 5 per cent of the state's electricity from solar by 2020 is in addition to the 20 per cent power from wind by 2020. The announcement comes as a new report confirms that Victoria could supply more than 100 percent of it's electricity from renewables. Friends of the Earth, Environment Victoria and the Greens have all welcomed the changes.

"This commitment to a sustainable future for Victoria should see the establishment of between five and ten large solar plants across regional Victoria," Mr Brumby said while visiting Silex's solar test facility in Bridgewater. "As a result of this initiative, Victoria will have up to 25 per cent of its power coming from renewable energy by 2020. This initiative will also provide new economic opportunities in regional Victoria, generating between $1.5 and $2 billion in new solar investment in Victoria."

The announcement has been welcomed by environmentalists. “This is a bright move that will help Victoria get ahead of the pack in the shift to renewable energy", said FoE campaign coordinator Cam Walker. “It will be a popular initiative among the millions of Victorians who are looking for strong leadership on climate change. By fast-tracking more clean-energy projects like this, the Government will soon be able to replace the dinosaur Hazelwood coal-fired power station.”

“In 2006 Premier Brumby committed to introducing a “landmark” Climate Change Bill so we expect that a centrepiece of the Government’s Climate Change White paper to be released this month will be strong new climate change laws.” said Cam Walker, “The White Paper should deliver a whole of government Climate Change Bill which sets ambitious emission reductions targets and is benchmarked on the Climate Change (Scotland) Act, " he said.

The State Government has set an interim target of generating 500GWh of solar power by 2014. "This is in addition to power generated by the Silex facility and represents a massive increase on the present level of solar generation Australia-wide and is enough to power more than 90,000 homes." said Brumby.

Gavin Jennings, the Victorian Climate Change Minister also announced action to support medium scale solar energy, such as installation of solar panels on large suburban shopping centres, "Generating their own electricity means businesses will not only help reduce emissions but they will save money on their bottom line - a win for business and the environment." he said. A Medium Scale Working Group would be established by the State Government to advise on what type of actions are needed to drive medium-scale solar power.

The Federal Government was urged to put a price on carbon to further drive investments into the renewbles sector to deliver deeper emission cuts. "A price on carbon is necessary to deliver the very deep reductions in emissions we need, but we need to forge ahead and tackle climate change through measures such as these." said Brumby.

The Federal Government of Julia Gillard has maintained the commitment by Kevin Rudd to reassessing an Emissions Trading Scheme in 2012, although the Greens are pushing strongly for the introduction of an interim carbon tax to start July 1, 2011.

The announcement from the State Government comes as part of a forthcoming policy on climate change in the lead up to the state election t the end of 2010. The Government is considering an initial 25 per cent phaseout of the coal fired Hazelwood power station, one of the most polluting and dirtiest in the western industrialised world, while climate and environmental activists are urging a total closedown of Hazelwood over two years.

A new report for the Victorian Government by Engineering consultants Sinclair Knight Merz - Renewable Resources Victoria: the renewable energy potential of Victoria - has confirmed that Victoria's future energy needs could be entirely met from renewable energy sources, including wind, solar, geothermal and wave.

According to the report renewable energy could provide up to eight times Victoria's current energy consumption and double the the estimated future demand by 2030.

Minister for Energy and Resources Peter Batchelor said on the release of the report "For nearly a century, Victoria has relied heavily on coal, oil and gas to supply us with relatively cheap but highly polluting energy. Now, we must reduce greenhouse gas emissions while our demand for energy continues to grow. As we begin this transformation, this new report confirms that Victoria is well placed to seize the opportunities that will arise, creating new skills, new jobs, new investments and new ways of making and using energy."

The report was based on a similar study for the UK which found that it was unlikely the UK had sufficient renewable energy resources to meet it's energy needs. While talking up the report Peter Batchelor also stressed moving to a low carbon economy would not happen overnight, "Technology for harnessing some of these resources is still in its infancy and very expensive. In addition, as technologies develop new infrastructure will be needed and must be appropriately managed and located to take into account social and environmental impacts," he said.

Environment Victoria also welcomed plans by the Brumby Government to fast-track the development of large scale solar power for Victoria. Environment Victoria's Campaigns Director Mark Wakeham said, "Today's announcement will make Victoria much more attractive as a place to build large scale solar power stations which can contribute to replacing polluting coal-fired power stations like Hazelwood within the next term of government."

"Victoria is likely to become the preferred state for large scale solar as a result of the premium payment provided by the feed-in tariff. If we can get projects off the ground quickly we may well be able to exceed the 5 percent target." said Mark Wakeham, "However if we want to lead the nation in both large scale and small scale solar we still need to improve the solar feed-in tariff for households and small businesses to catch up to the incentives offered in NSW and the ACT."

"In the absence of national leadership and a price on carbon Victoria will need to take further measures to support energy efficiency and clean energy to ensure that we can replace the whole of Hazelwood power station and achieve significant cuts to our greenhouse pollution in the next term of government." he said.

The state Liberal party came in for criticism on climate action, "So far the only climate policy we've seen from the Coalition is a plan to stymie the development of wind power. If Ted Baillieu wants to appeal to the vast majority of the community who want action to reduce greenhouse pollution he needs to get some runs on the board quickly." concluded Mark Wakeham.

The Greens have also welcomed Victorian Premier John Brumby's announcement of a gross feed-in tariff for large-scale solar plants and urged both Julia Gillard and Tony Abbott to embrace a national feed-in tariff to support all forms of renewable energy. Australian Greens Deputy Leader, Senator Christine Milne, said today "A properly designed feed-in tariff is recognised as the reason Germany, Spain and some US states have seen tremendous booms in renewable energy, creating jobs and investment, cleaning the air and reducing emissions," Senator Milne said. "Premier Brumby is to be congratulated on his decision today. He is leaving Julia Gillard in his wake, although he still has a fair way to go to catch up with the Greens."

It is likely Prime Minister Gillard will announce grants for development of solar projects as part of the Government election campaign. Senator Milne criticised this approach for renewable energy as not strategically developing the sector. "One off, ad hoc grants do nothing to develop the industry. They will see Australia importing technologies we have driven offshore through lack of ongoing support."

"If we want to create jobs and long-term investment, as well as drive the transformation to 100% renewable energy, we need a well-designed national feed-in tariff." said Senator Milne "While I welcome Premier Brumby's announcement, the expansion of state-based schemes can lead to perverse outcomes for investors, particularly in the context of the national renewable energy target."

The initiative by the Victorian Government follows a report by Beyond Zero Emissions and the Melbourne Energy Institute at Melbourne University of a detailed and costed plan of action on How to achieve Zero Carbon Emissions by 2020 for Australia. 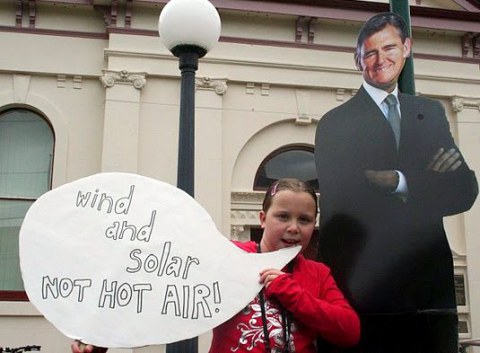 Is this report on renewable energy in Vic available anywhere? I haven't seen it on news websites, govt websites or even the firm's page.

I haven't found it either, just the Minister's press release and press reports referring to it. It needs to be made available to the public.

As mentioned ...untill strategic growth plan is not adopted...it is a long way to move in the green direction.