A new scientific study finds that Sydney faces hotter temperatures due to the interaction of expanding urbanization, climate change and the urban heat island effect

The study - Temperature response to future urbanization and climate change (abstract) - highlights the combined impact of both new urbanization and climate change on near-surface temperatures for greater Sydney, with positive feedbacks between urban expansion and global warming at the local scales. While Maximum daytime temperatures (Tmax) for Sydney are projected to only increase slightly and mostly in the winter, most of the change will be seen in substantial increases in nigt-time temperatures (Tmin), particularly in Spring and Summer months.

Urban expansion in Western Sydney is creating a multitude of new estates on Sydney's fringes expected to house more than 100,000 residents. These new urban areas are likely to experience the largest rises in temperature of up to 3.7 degrees Celsius by 2050 due to the interaction of land use change, global warming and the urban heat island effect.

The Urban Heat Island effect (UHI) is a well known and studied phenomenon which says that the built urban environment increases local temperatures, while reducing the opportunity for evapo-transpiration for cooling.

The study was conducted by researchers from the ARC Centre of Excellence for Climate System Science at the University of NSW. It comes just after a Princeton University study, published in May 2013, that concluded that heatwaves would exacerbate and amplify the Urban Heat Island effect on cities generally.

With high summer temperatures like we have just seen in Australia's Angry Summer, cooler night temperatures allow us to recover from the heat stress of high daytime temperatures. But with the projected large scale increase in minimum temperatures due to the Urban Heat island effect compounded by more extensive heatwaves, more people are likely to be unable to fully recover overnight. Urban heat related deaths and mortality rates will increase. Heatwaves will increase heat stress resulting in reduced work capacity. And for those unprepared for extreme heat events, particularly the very old, infirm or very young, heat stress can approach and pass the physiological limits of human health in coping with temperature extremes.

"Interestingly, we found that overnight temperatures increased far more than temperatures during the day," said study lead author Dr Daniel Argueso, "This has implications for health problems related to heat stress accumulation and at an economic level where the higher energy consumption needed to power air conditioning overnight may lead to higher power bills."

The study used the Weather Research and Forecasting (WRF) model to simulate the present (1990-2009) and future (2040-2059) climates of the region at 2 km spatial resolution. This regional climate model downscales information from the CSIRO MK3.5 Global Climate Model (GCM) - the primary GCM used for the Australian and south Pacific region. More accurate Land use data for the Sydney region was used, including projected urban planning in place for expected urban expansion.

"A comparison between areas with projected land use changes and their surroundings was conducted to evaluate how urbanization and global warming will act together and to ascertain their combined effect on the local climate. The analysis of the temperature changes revealed that future urbanization will strongly affect minimum temperature, whereas little impact was detected for maximum temperature. The minimum temperature changes will be noticeable throughout the year. However, during winter and spring these differences will be particularly large and the increases could be double the increase due to global warming alone at 2050. Results indicated that the changes were mostly due to increased heat capacity of urban structures and reduced evaporation in the city environment." 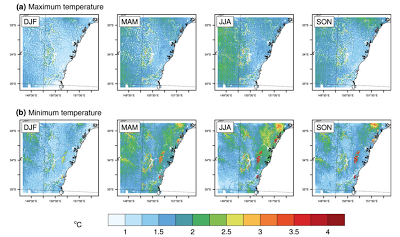 The fact that Sydney is located on the coast also moderates to some extent maximum daytime temperatures with cool air transported by typical summer winds from the ocean replacing the warm air displaced by convection due to warm urban surfaces. At night the urban ground and built environment acts as a major heat source with weaker winds from the ocean resulting in much larger changes in minimum temperatures over urban areas.

The study modelled wind speed changes due to Urban expansion and forecast an increase in the dominance of the changes in light winds, a potential negative feedback providing greater evaporation capacity. But the study says that "the impermeability of urban surfaces reduces the available moisture for evaporation to almost zero much of the time and thus very little surface evaporation takes place."

Fringe areas of Sydney can expect increasing urbanization. New urban areas on the fringes of Sydney are projected to see temperatures rise between 1.1-3.7°C, while the rural areas near these new suburbs could see increases of 0.8-2.6°C. Existing urban areas closer to the CBD will see likely rises of 1.1-2.5°C reports the study.

While not investigated as part of this study, the authors suggest further investigation of adaptation strategies to moderate the urban heat island effect. Such strategies include substantive changes to development guidelines to include placement of parks, extensive tree planting and green cover mixed with the presence of water bodies to aid evapo-transpiration to partly cool and counteract the UHI effect.

Dr Paul Osmond from the University of New South Wales Built Environment suggested changes to planning guidelines would be a useful strategy.

"Current research shows that along with other strategies green spaces, street trees and bodies of water can have a marked effect on reducing urban heat island effect," said Dr Osmond.

"Not only do these help keep suburbs cooler, there is also a knock-on effect where these places gain social advantages through additional amenities and recreational areas. Quite often, leafy suburbs that contain a number of parks and bodies of water also tend to see increased real estate values. It's a win-win situation for everyone." he said.

While this research has focussed on Sydney, it provides valuable lessons in regional climate assessments for cities across Australia, indeed around the world. More research needs to be done for other Australian cities to understand local climate characteristics and urban impacts on temperature.

"We need to develop a complete profile of temperature changes for different cities taking into account their various urban expansion prospects and locations," Dr Argueso said. "With this information, we can provide an invaluable tool to help with the future development of Australian cities and the environment many of us live in." 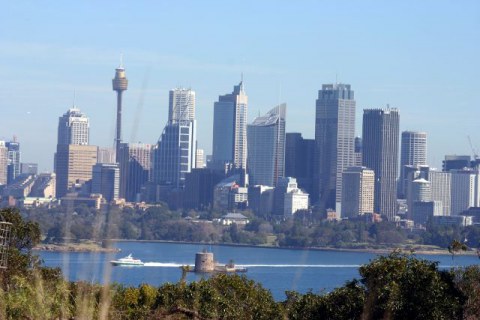 You are on the right track, where do you think the thermometers that measure the global temperature are? Yes in the heat islands where the temperatures are greatly distorted upward in the winter months.

Re: Winter temperatures greatly distorted in the heat islands

Not that again. You should read physicist Professor Richard Muller and the Berkeley Earth Surface Temperature Group's study which eliminated sceptical arguments that urban heat island effects biased the temperature record. His group re-examined temperature records to eliminate such bias and found similar results to NOAA, NASA and the UK's HadCrut data.

Paint all buildings white, cover all with solar panels

Great article on keeping it safe in the extreme "heat islnads" but don't forget about your establishment as well, especially your roof.

Our Experience in the roofing industry further enhances our ability to provide the service you require.
In addition ASI(Australasian Shingle Importers) is one of Victoria's few roofing companies geared up for unionized commercial projects and domestic applications.