A letter from Little Red Toolangi Treehouse campsite: Water from a wet forest

A river’s gentle white noise soothes sleep as stars turn through trees, the gift of water - so so special in our dry land. This is the Yea River, a short dawn walk through soft treeferns. It was for hours like this, a gentle though persistent presence to sleep with, till the forest stirred from breeze and leaves countless grow the white noise into a stirring celebration of water, sun and life that is this place - a ‘Great Forest’.

This is ‘Wet forest’, home of Mountain Ash and it’s treeferns at foot. Wet forest streams are effectively wellsprings leaving the forested mountains near Melbourne, taken for granted in our modern lives or simply forgotten. Such ever flowing perennial waters leave the forested Yarra ranges to the south and are caught for you Melbourne in several large dams, or flow north of the ranges as this river does, the Yea joins Sylvia Creek and flows from Toolangi Forest onward to join rivers Goulburn then Murray for irrigation and drinking water. The stream is still flowing - pretty impressive considering this summer with its string of extreme days. Tributary streams adding next to nothing beyond the bounds of this Wet forest.

Yea River below its junction with Sylvia Creek

It is Wet ’Old’ forest like that in catchment above our campsite that gives water. In contrast forest like that in several nearby clearfell coupes - doesn’t. Forest hydrologist George Kuczera found such young forest is effectively dry forest for at least 100 years.

Young forest is a giant thirsty nursery of countless seedlings at foot (starting out at thousands per square metre), young forest is found here in clearfell coupes extensively blotting Toolangi State Forest’s landscape, each one 20 to 40 Hectares in size. Professor David Lindenmayer aptly describes thirsty young forest like so “Young forest is like a house full of teenagers - they empty the fridge”. Though unlike teenagers tree lives are long, Mountain Ash doesn’t stop its rocketing growth phase till 90 metres plus is reached, and amazingly this may happen in as many years.

From our campsite next to the Little Red Toolangi Treehouse I can think of two recent clearfell coupes cut within a decade at the very start of the Yea River, each with a giant dead tree standing proud as monuments to the former forest, peering down at thirsty young forest, and one coupe proposed upstream a stones throw from a site I photographed the iconic Sooty Owl - listed as ‘threatened’ by Flora & Fauna Guarantee Act. The Little Red Treehouse hangs nearby our campsite in the proposed ‘Freddo coupe’ from a forest giant. With an eagles perspective dozens of coupes cut within a decade highlights the forests abuse, this place is so much more than a giant cash cow for Nippon paper.

Just like the Treehouse the future of our Wet Forest is indeed precarious. From our European forest folklore is this Wet Forest our Golden Goose? Or our watershed? There is growing support for a Great Forest National Park, backed by World renowned forest ecologist Professor Lindenmayer. This wet forest is a Carbon big gun, with the potential to sequester carbon to 1800 tonne per Hectare.

Since November 2013 the Treehouse has been standing as a beacon, educating and raising community awareness regarding unsustainable logging practices. Yesterday the Magistrates Court in Mansfield gave 28 days notice from the 12th of March for the Treehouse to be removed. Come visit the Little Red Toolangi Treehouse on the Yea River, just over an hours drive from Melbourne’s CBD there couldn’t be a better time to come visit!

Looking north up the Yea River valley with its headwaters at RHS, the photo shows Toolangi State Forest surrounding the farms of Toolangi. The most recent clearfell is obvious green/blue patch at LHS, along with several other Young dry patches of forest 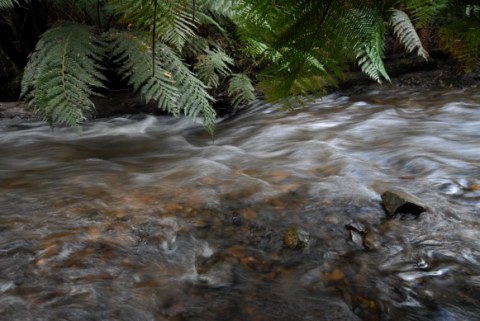 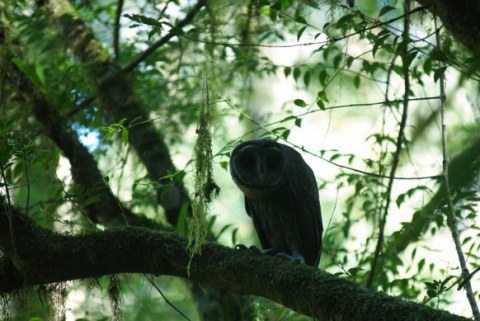 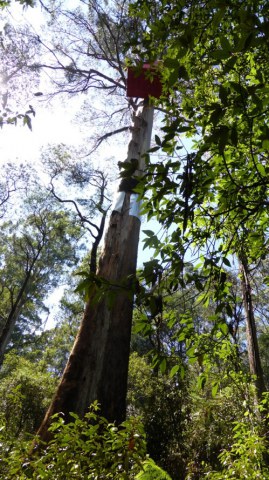 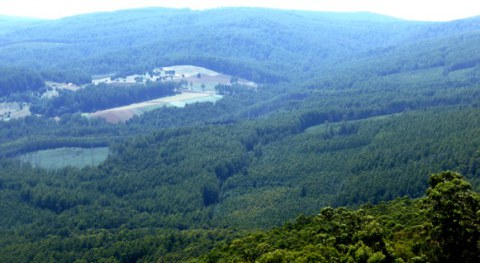