Catholic anti-war and social justice activists and members of the Catholic Worker from Brisbane and New Zealand gathered to show opposition to the elevation of unapologetic Iraq war General, Peter Cosgrove at a function in Brisbane on Tuesday night. Cosgrove was elevated to the position of Chancellor of Australian Catholic University in 2010 and was awarded a papal knighthood by Cardinal George Pell earlier this year.

The group were disturbed when they read that Cosgrove, Australia's military leader General of the Iraq war had been invited to be the speaker at the deanery Year of Grace event.

Before the 2003 Iraq war as head of the ADF, Cosgrove would have been well aware of warnings of a humanitarian disaster in Iraq. He should also have known of warnings of false information about Iraq's link to terrorism and Weapons of Mass Destruction by experts like Britain's Dr David Kelly, UN arms inspectors Hans Blix and Scott Ritter and Australia's own intelligence expert, Andrew Wilkie.

Cosgrove, a Catholic, would also have been aware of warnings by Pope John Paul II that war with Iraq was "a defeat for humanity which could not be morally or legally justified." The pope said the U.N. charter and international law "remind us war cannot be decided upon, even when it is a matter of ensuring the common good, except as the last option and in accordance with very strict conditions, without ignoring the consequences for the civilian population, both during and after the military options." The Australian Catholic bishops stated 5/3/2003: “We believe that the strict conditions of Christian teaching for the use of military force against Iraq have not been met. In particular, we question the moral legitimacy of a pre-emptive strike.”

Yet, Cosgrove ignored the leaders of his own Church and chose to follow the leaders of the western military-industrial complex into a war which ignored international law and turned Iraq into a humanitarian disaster which would only serve to promote anti-western hatred and terrorism.

He has the blood of thousands of innocent Iraqis on his hands. He was a participant in the destruction of an entire nation's civil infrastructure and shares responsibility for the subsequent civil war. He did nothing to stop the torture and abuse of Abu Graib, the holocaust of Falluja, the horror of cluster bombs, horrific birth deformities caused by depleted uranium or the decimation of the Iraqi Catholic (Chaldean) community. Right up until today, conditions for the people of Iraq are far worse today than they ever were under Saddam Hussein. Iraq currently has the highest rate of political execution in the world.

Several members of the group managed to confront Cosgrove and questioned him on his role in Iraq, a war which was based on lies. The issue of East Timor was also raised and the fact that the ADF trained Indonesian Kopassus special forces at Canungra in Queensland for several years before being sent to the killing fields of East Timor. Cosgrove remained unapologetic for his role in Iraq, dismissed any concerns of morality or justice and claimed that he was only going his job. For this, he was challenged and asked to resign his position of Chancellor of ACU. 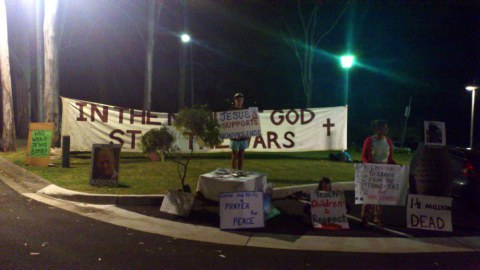 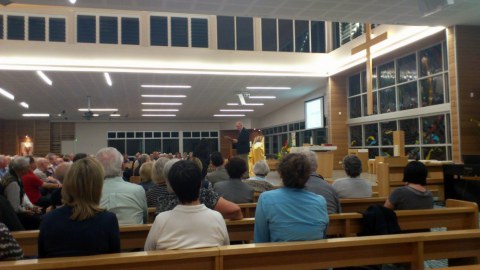 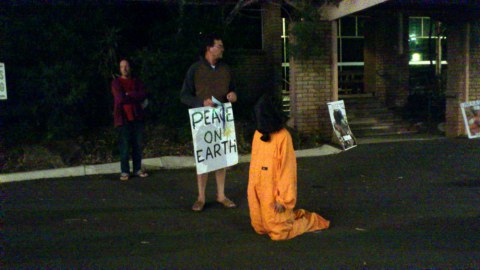 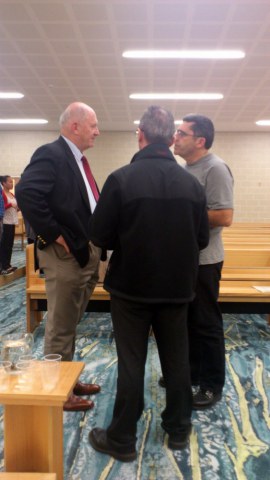