The parliamentary leaders of the Labor Party, Liberal Party and the Greens all responded to Barack Obama's statement on the necessity to act on climate change made during his 2013 inauguration speech.

The Prime Minister Julia Gillard welcomed the statement and also reiterated government policy on carbon pricing, and the trend for more extreme weather events due to climate change as articulated by climate scientists.

Tony Abbott was more combative, attempting to use his press conference question for taking a cheap shot at President Obama not being able to get climate legislation passed through congress, and attacking the Government's carbon pricing policy.

Greens leader, Senator Christine Milne, also welcomed the change in priority on climate change by the US administration and said that "the proof of President Obama's commitment will be in what the US does in the global negotiations" over the next two years.

At a press conference with the Prime Minister today, Julia Gillard welcomed President Barak Obama's announcement of the need to act on climate change, calling his speech wonderful. She also reiterated her comment on the long term climate trend for more frequent and intense extreme weather events due to global warming.

Julia Gillard applauded the initiative involved, not only for America, but it's impact on climate ambition globally, "What I was taken by in the speech was all of the work that President Obama has committed himself to which matters not only to the nation he leads, but matters to the world."

"We have got work to do on climate change and President Obama was very forthright about the need to tackle climate change." the Prime Minister said.

She also drew attention to the similar focus on domestic public policy on education, and better conditions for people with disabilities. "So as we go about improving our education system, as we go about building a National Disability Insurance Scheme, I think we will be able to have a lively public policy exchange with the United States." she said.

Julia Gillard pointed out specifics on social policy directions which the President is committing to may be different than in Australia. She articulated that President Obama's statement "reinforces climate change is real and pretending it is not or pretending that there are slipshod solutions to it is not good enough."

In the United States President Obama was unable to get an emissions trading scheme through Congress in his first term due to the political gridlock nature between the Republicans, Democrats, the conservative Tea Party republicans, and the strong influence of fossil fuel industry funding political campaigns and lobbying politicians

The Prime Minister emphasised that a price on carbon had been legislated in Australia which is a major part of our climate policy to reduce carbon emissions. "And here in this nation we have resolved for ourselves that we are going down the most effective path for reducing carbon pollution and that is putting a price on carbon." she said.

The reporter also asked her to comment on the extraordinary summer extreme heatwave and bushfires which saw temperature records tumbling, and whether they had anything to do with climate change? Here is her full reply:

"On the extreme weather events that we have seen over the summer, I have got family in Adelaide so I have heard at length about sweltering Adelaide. I was in Sydney the day that the records tumbled. I have been to bushfire grounds in two states."

"You can't ever put down one weather event and say this is climate change, but you can accept the science that the scientists are telling us."

"I am not a scientist, but from a lay person's point of view it is a pretty startling day when the weather bureau says that they have had to pick a new colour for their map because they don't have a colour that tells us about a land temperature of 50 and above."

"I think that is a pretty startling day."

"So you can't look at one weather event but you can look at the broad sweep."

Federal Liberal Party opposition leader Tony Abbott also made a response to President Obama's climate change statement from the inauguration address.. Rather than to congratulate the President on his commitment to tackle climate change, he took a cheap shot at the President for not being able to get an ETS through a gridlocked Congress.

"Well the interesting thing is that President Obama's administration has three times in the last few months explicitly ruled out a carbon tax or an emissions trading scheme." he told reporters, without explaining details on the toxic politics currently in Congress.

But then Tony Abbott has been leading the toxic politics within Australia on climate change, speaking on the same platform as climate change deniers such as radio personality Alan Jones when it suits his political purposes.

He used the press conference occasion as one more opportunity to attack the Australian Government's Price on carbon policy that was negotiated with the Independents and the Greens, that has now been legislated and came into effect on 1st July 2012. The carbon tax appears to be working smoothly and will eventually morph into an emissions trading scheme with a link to the European emissions trading market.

"We all want to give the planet the benefit of the doubt but we've got to have smart policies, not dumb policies to do that and it is a very dumb policy to damage the Australian economy without helping the environment and that's the problem with Labor's carbon tax. It damages our economy. It doesn't actually reduce Australia's domestic emissions. Even on the Government's own figures despite a carbon tax of $37 a tonne by 2020, Australia's domestic emissions go up by eight per cent, not down by five per cent." he told reporters.

I am surprised he currently only believes in giving the "benefit of the doubt" that climate change is real! especially after working as a volunteer firefighter with his brigade battling the ferocious fires in NSW. Even Ken Thompson, a former deputy commissioner of the NSW Fire Brigade with 38 years of firefighting experience outlined the prognosis in an op-ed piece in the Daily Telegraph:

"Unless we act now, we can expect a future of more and worse fires. The federal government and several industries have taken small steps already to reduce Australia's emissions, but we all need to do more and we need to act decisively and promptly. The threat of climate change is real and we are seeing its effects now."

But if it is only the benefit of the doubt, it means he still distrusts the years of work of climate scientists from the Bureau of Meteorology who published an article on What's causing Australia's heat wave? , or the Australian Government expert panel, the Climate Commission, who released a report on the extreme heatwave and the trends for increasing fireweather and frequency and intensity of bushfires.

Tony Abbott is a former Rhodes scholar, so the implication is he has a brain and reads expert reports, but he still only thinks we should give climate change the benefit of the doubt.

The "damage to the economy" over the last 6 months has not been quite as devastating as the beat up prior to the introduction of the tax, which is applied to just the large carbon intensive polluters. And there are signs the carbon tax is starting to reduce carbon emissions from stationary energy production in the electricity market, along with the impact of the renewable energy target (RET).

His own Liberal Party climate policy emphasises abatement through soil CO2 (saving greenhouse gas emissions by 85 million tonnes in 2020, 60% of the target 5% reduction by 2020), spending millions from Treasury in buying up abatement from the least efficient carbon emitters - ie paying polluters not to pollute, and planting 20 million of trees in urban areas.

CSIRO's Dr Michael Battaglia estimated that in the period to 2020 the attainable abatement from soil carbon measures on cropping and pasture can only reduce greenhouse gas emissions by 1 million tonnes in 2020 - at most. Land Management scientist Ben Rose also demolished the Coalition's soil sequestration measures as unachieveable and an abatement black hole.

The measures to pay large carbon intensive companies not to pollute would be open to substantial rorting and a waste of taxpayer's revenue.

While they have a commitment to Renewable energy on a Federal level, one only has to look at the draconian wind policies in the State Government jurisdictions of NSW and Victoria to determine which political party is undermining development of renewable energy.

In terms of forestry, planting millions of trees is no substitute for taking care of the mature native forests the world's most carbon dense which have a higher bushfire resistant than native regrowth forests. Unlogged native forests tend to hold soil moisture better than regrowth forests with many trees of the same age that tend to burn at a much higher temperature.

Australian Greens Leader, Senator Christine Milne welcomed the announcement by President Obama of increased committment to reduce emissions and act on climate change. In a media release she said:

"As this summer of extreme weather continues, there is reason to be hopeful that President Obama can deliver much more serious action on global warming in his second term, and the community pressure on him to do so will be ever stronger,"

"While domestic action to cut the pollution driving global warming is critical in the USA as it is in Australia, the proof of President Obama's commitment will be in what the US does in the global negotiations process this year and next.

"The world is tired of waiting for the Americans to get serious about negotiating a binding treaty. In 2005, when the Kyoto Protocol was ratified, a special two-track negotiating process was established specifically to keep the USA and Australia in the tent long enough for the political situation to change.

"7 years, the first Obama Presidency and Australia's big steps later, the world is still waiting for the United States to act. Hopefully, President Obama's rhetoric will be followed by action, moving towards the promised 2015 global treaty.

"As President Obama has said, and as the Greens have argued and delivered with policies such as the Clean Energy Finance Corporation, we cannot afford to be left behind in the clean technology race. It may turn out that China's drive to renewable energy is what leads the world to tackle global warming.

"All this points to just how out of touch Tony Abbott is. I once again call on the Coalition to take its head out of the sand, stop opposing clean technology and pricing pollution, and come on board with what the community and the science demands."

Time to break the silence on Export Coal

Of course neither the Liberal Party or Labor Party have tackled the really big issue how Australia can effectively reduce CO2 global emissions - phase out the export of coal. Only the Greens raise it as an issue.

More than anything else, coal exports are Australia's major source of carbon emissions that has unspoken bipartisan support of both major political parties. Many Australian's believe it is Time to cease expansion of coal to reduce climate change.

But it is more than politicians from the Liberal and Labor Parties. It is the collusion of the big 4 banks who fund the big coal boom underway in Australia. An investigation by Julien Vincent published in New Matilda highlights that there are 49 new coal projects proposed or being developed and funded just by the ANZ Bank. 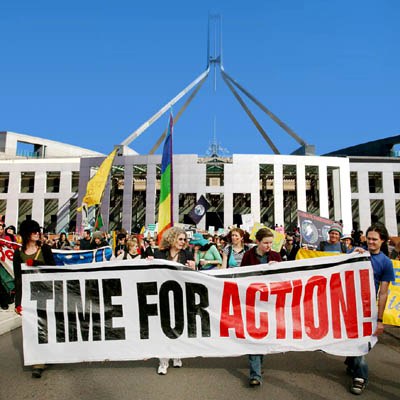 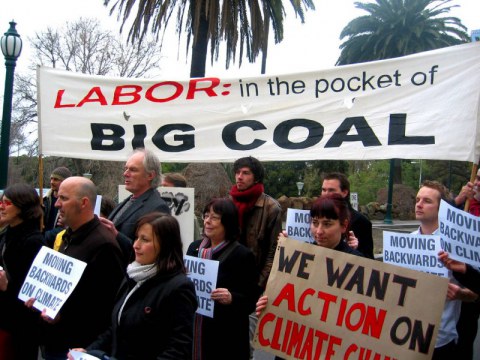