The Uranium Film Festival from Rio de Janeiro is traveling now to Berlin - together with several films from Australian filmmakers. Next October (Oct. 4th to 12th) the Festival will screen more than 50 "nuclear" documentaries and movies in the two cinemas Eiszeit and Moviemento in Berlin-Kreuzberg. Most of the films from all continents about nuclear power, uranium mining, atomic bombs, radioactive and nuclear accidents or about depleted uranium weapons will be in English, in German or with German subtitles.

The Australian films are: "Australian Atomic Confessions", "Maralinga Pieces", "Blowin' in the Wind", "WHEN THE DUST SETTLES", "Dirt Cheap 30 Years On: The Story of Uranium Mining in Kakadu" and "FIGHT FOR COUNTRY - The story of the Jabiluka Blockade". Further films from other countries are "Hiroshima, A Mother's Prayer", "Hibakusha, Our Life to Live", "BEATING THE BOMB", "CAESIUM 137 - THE DEATH SHINE", "The Red Button", "Leonids Story", "Uranium 238", "The Return of Navajo Boy", "INVISIBLE WAR", "YELLOW CAKE - The Dirt Behind Uranium", "BUDDHA WEEPS IN JADUGODA", "Rokkasho Rhapsody" and "Into Eternity" 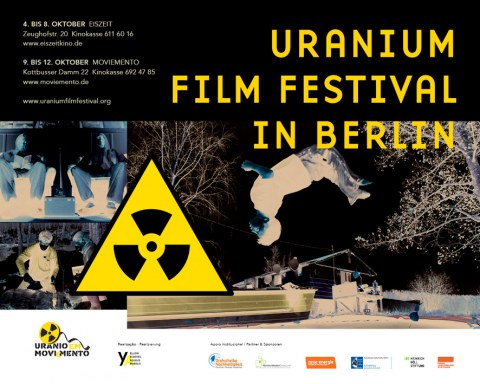