Charges were dismissed against 49 climate activists under a section 10 ruling by an East Maitland Court magistrate yesterday. The protesters had committed non-violent civil disobedience at a climate camp against a new coal fired power station being built in the Hunter Valley in December 2010. The section 10 ruling means they have no conviction recorded, no criminal record and their fines dropped.

After reading the references and bios of the protestors, the magistrate noted those appealing the conviction all demonstrated community spirit and a commitment to social justice and the environment. The court found them to be "impressive and remarkable individuals". The magistrate stated the protesters do not pose a threat to the community, and instead are of good character, representing community concerns around coal and climate change.

Newcastle resident Naomi Hogan said the group was motivated by their concern about coal expansion. "Those who appealed the conviction in court today are everyday people who are very concerned about climate change and the negative health impacts of coal. We do not want to see a new coal fired power station built at Bayswater."

"Taking illegal action on the track that day was very out of character for us. We are people who volunteer in our communities, and we are teachers, tradies, parents and students. But the threat of climate change and a new coal fired power plant was too great for us to sit back – we had to act." Ms Hogan said.

The charges related to an action on December 6 at the NSW climate camp near the Bayswater Power Station in the Hunter Valley – Australia’s single largest source of carbon pollution. One hundred and thirty people occupied the train line transporting coal to the power station. They were all arrested and charged with trespass.

In January at the Muswellbrook County Court 73 people were fined the minimum charge of $250 after the magistrate took into account the outstanding character of the defendants and their genuine concern about the impacts of climate change.

The Camp for Climate Action 2010 was a national event which challenged the NSW Government’s proposal to build a new coal-fired power station next to the existing Bayswater power station site, doubling negative impacts on health and pollution. 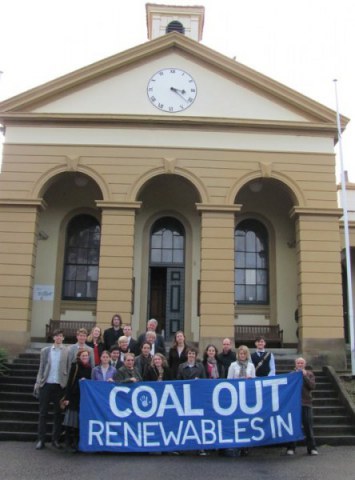 Re: Judge rules in favour of Hunter Valley coal protesters

Re: Judge rules in favour of Hunter Valley coal protesters