Efforts to undermine the nationalism and militarism of ANZAC Day continue

On 25th of April each year, Australia “celebrates” ANZAC Day. The day has become a chance to whip up nationalist fervour and to perpetuate the myth that Australian identity was formed during the carnarge of World War One. Instead of being a day to remember the victims of war it pushes the historical lie that “our freedoms” were won and protected by participating in a imperialist invasion of Turkey on behalf of “King and Country”. The myth serves helps to bolster our current involvement in imperialist wars in Iraq, Afghanistan and elsewhere. However the peace movement and the left continue to try to undermine these militaristic efforts and mark ANZAC day differently by holding a range of peace and social justice events around Australia and by publishing articles in the alternative press that offer a counter historical view.

In Canberra a Peace Vigil was held on ANZAC eve, whilst in Melbourne people are gathered to remember the anti-conscription campaign and in particular the role of the IWW in this movement for peace. You can read more about this campaign in a booklet by Jo Toscano. The Green Left Weekly has also published a story revealing the role “our ANZACS” had in violently suppressing an independence movement in Egypt in 1919 and Hamish Chitts reveals that Simpson who famously picked up injured soldiers at Gallipolli was actually a working class radical who opposed war! Meanwhile the Veterans group Stand Fast has used ANZAC Day to call for the immediate withdrawal of Australian troops from Afghanistan.

Perhaps in a final sad irony, today protestors are gathering outside the Curtin Detention Centre, a converted ADF facility still guarded by the ADF where 1500 people are incarcerated many of them who have fled Afghanistan where Australia is again fighting a bloody imperialist war. Is this the “freedom” that is celebrated each year on ANZAC Day?

Note: the image attached to this article is the famous "Blood Vote" poster from the anti-conscription campaign waged in Australia during World War One by Trade Unionists, peace activists and many others. 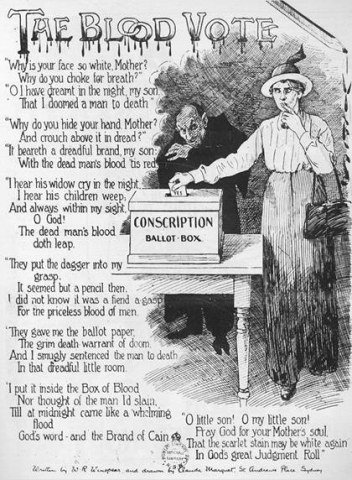 For a report on the Melbourne event celebrating the defeat of conscription, see Melbourne Protests weblog - http://melbourneprotests.wordpress.com/2011/04/25/anti-conscription-cele...

Prior to the landing at Gallipoli, Australia was a naive child, trusting and obedient.

Stupid errors by the British lead thousands of naive adventure seeking Aussies to their death.

We grew up in that moment and learnt that our interests are best determined by us and we can think for and make decisions for ourselves; we became an adult nation. War and conflict and inextricably linked with national identity and cultural values. You can’t have one without the other. Possible conflict will quickly precipitate those values and beliefs which are important, and worth defending.

From what I can see the freest and most democratic countries have a cultural identity founded in blood and conflict. It seems we have to learn our greatest lessons from our darkest hours. Not because we crave war, on the contrary like so many people are realising, peace, freedom, equality, justice and prosperity are never granted on a platter by those with authority and power. It must be fought for and defended with vigilance. It is a function of our humanity.

The most selfless act is by those, whether a solider or armed citizen willing to fight and die for the peace and freedom others might enjoy. ANZAC Day is about respecting and celebrating those individuals who have fought and died so we, for example so we can publish out thoughts without persecution. They deserve our highest respect.

I am not saying that all wars and conflicts have been moral, honourable, justified or right. They haven’t. I wish peace and freedom wasn’t like climbing a high altitude mountain, but it is; but the pleasant view is worth it and I appreciate it.

As a tax payer I expect our ADF to vigioulsy defend our boarders and to detain anybody who enters this country unlawfully, irrespective of who they are, why and where they come from.

I to what ? The initial article and argument ?
or to your friend and comrade in arms (as}who would like to perpetuate wars in the name of sacrifice and culture ?

here's one for you opinionated - almost forgot !

Pauls epistle to the Ephesians

Put on the whole armour of God, that ye may be able to stand against the wiles of the devil.

For we wrestle NOT against flesh and blood, but against principalities, against powers, against the rulers of the darkness of this world, against spiritual wickedness in high places.

sorry, this is meant for 'christians' opinionated.

when you stop spruiking your lies you might get on your hands and knees and become one instead of masquarading as a selfless person.

and no , I am not following you - you wish !
just that we both are at the opposite ends of the spectrum when it comes to issues such as war.

You have your opinion and I have mine.

Your personal attacks on me in a previous post should have come to the attention of the editors but unfortunately did not, so be it.
I post here at my own peril and as long as there is freedom of speech in this land I shall continue. Wars or no wars !

have a nice day