Around 500 Visy workers across Australia have been on strike since November 29th, 400 of them at the Visy plant in Dandenong. The strike has been over the workers demands that the company stop undermining their job security by forcing casual employment on workers at the factory, as part of latest round of enterprise bargaining. Visy has further angered the protestors by flying in an a scab workforce by helicopter to maintain production at the factory and by taking out injunction on individual workers this morning. Today saw a major escalation of the dispute with at least 29 people being arrested and charged with creating an undue obstruction and besetting the premises. One worker was injured when a truck run over his foot.
Update: Trades Hall has called for a community picket at 6AM at the site tommorow (Tuesday 13th December). Please try to make if it you can to show solidarity. Corner Greens Rd and Hammond Rd Dandenong
Related: Video of arrests from Channel 9 -- Youtube footage of picketline -- AMWU Press Release -- Workers Solidarity Network

This morning saw dramatic scenes at the picket line. Workers have been blocking trucks at the site successfully for ten days. Previously injunctions have been taken out by Visy management against Stewards of the AMWU, but this morning the company dramatically escalated the conflict by taking out injunctions out on individual union members on the site. With 40-50 police present plus security, six trucks and vans full of scab labour were brought in to run the picket line.

As management pointed out individual workers to serve injunctions on, the workers refused to acknowledge or pick up their injunctions, instead adapting the soccer chant - "Communicate, Negotiate - Goodbye, Goodbye". Workers were then further angered when one truck ran the picketline, running over a workers foot injuring him and he had to receive medical attention from an ambulance. Workers then decided to defy the injunctions and the police and sat on the road, linking arms. Eventually throughout the day, 29 workers were arrested.

Two of those arrested were community members who were picketing the site as an act of solidarity and support. The Workers Solidarity Network and other community members are down at the site offering support at the picket. It is very important that people go down to reinforce the picket or offer any other support they can at this crucial stage of the dispute. Due to the repressive nature of Australia’s industrial laws, community support is vital to reinforce and strengthen industrial action.
The use of police and such large scale arrests is an outrageous use of the police. The true role of police as the industrial muscle of employers was revealed in The Age which quoted a police spokeswoman as stating that “ police had now left the site, and would return only if their presence was deemed necessary by Visy management.” She was also quoted in the Greater Dandenong Weekly as saying that those arrested had endangered their own lives and had ‘‘insisted on being arrested’’.

According to one source in attendance today at the picket, the real stakes in this picket is an attempt by Visy to casualise the workforce, get rid of the stronger unionists and then move towards deunionising the whole site. This cannot be allowed to happen.

So get down to the Trades Hall endorsed community picket at corner Greens Rd and Hammond Rd, Dandenong and show that the community won’t stand by whilst the Visy and the police try to crush their fight for fair conditions.

Update December 17th - all charges have now been dropped against the strikers and the dispute has been settled with the agreement of the union. Visy has agreed to not freeze the conditions of casual employees - the major sticking point in negotiations. 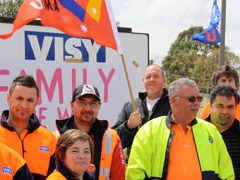 Re: 29 workers arrested at Visy in Dandenong- Solidarity Needed!

Knock it off, its un Australian. Solidarity now.

Visy – so striking is a crime now too?

This Monday morning police viciously attacked a picket line at the Visy plant in Dandenong in Melbourne, arresting 29 striking workers. Their crime? Trying to win a better wage deal from the Pratts, the rich bastards who own Visy, and whose wealth comes for the sweat of their workers and the lie that is private property.

While this might be part of a strategy on the part of the new Liberal Government to prove its credentials to the ruling class, the attacks took place under Labor’s industrial laws. Police have charged the workers with ‘besetting a premises’. This is code for setting up a picket line.

Visy got a court order a bit over a week ago to allow access to the site and prevent union officials participating. Relying on ‘independent umpires’ is clearly not working. Only real industrial muscle can win this dispute and force Visy to back down.

The criminalisation of strike activity except in certain limited circumstances has been the common agenda of both the Labor Party and the Liberals, the two arms of neoliberalism in Australia. This is as true of Labor’s Workchoices Lite as it was of the Coalition’s Workchoices.

The two parties of neoliberalism have been able to set up an industrial regime that criminalises most industrial action only because the Australian Council of Trade Unions has allowed them to. As the pressure on profit rates globally and in Australia grows, there will be more and more attacks on workers trying to defend their jobs and conditions. The time to take a stand is now.

30 years of collaborating with the bosses has led to a weak, directionless union movement with declining numbers and the destruction of rank and file confidence, the backbone of any successful union movement. Yet despite this class collaboration by the union bureaucracy over 2 million workers still have enough class consciousness to join a union.

The 2 million unionised workers could turn off the profit tap tomorrow and these anti-union laws and actions would be dead, cremated and buried.

Ged Kearney, the President of the Australian Council of Trade Unions, is reported to be shocked by the cops’ attack.

“I cannot believe a company as well respected and with a standing that Visy has in Australia has resorted to this style of industrial relations, this sort of thuggery.”

I am surprised that she is shocked that a company would put profit before wages and use the thugs of the capitalist state to enforce their ‘right’ to exploit workers. Gee, who’d have thunk it? At least Kearney told workers to keep up their protest. But it needs to go further than that.

An injury to one is an injury to all. Visy workers can only win if other workers and unions join them and close down Visy operations across Australia.

Such activity is illegal under Labor’s laws. Defy Labor and their pro-boss industrial laws. Spread the Visy dispute. Close them down. Victory to Visy workers.

Coverage of dispute on Slackbastard blog

In a major attack on basic democratic rights, including the right to strike and picket, nearly 30 striking Visy Board workers were arrested this morning on a picket at the company’s Dandenong plant in Melbourne. The giant paper and cardboard producer responded to industrial action at its Melbourne and Sydney plants with a highly organised attack by more than 30 police on 120 pickets.

Workers were arrested for “besetting a premises”—and could face up to three months’ imprisonment if convicted. One worker was injured by a strike-breaking vehicle, and another striker had a heart attack after his brother, who also works at the plant, was arrested.

Despite ongoing negotiations the Visy dispute in Dandenong continues. People are still needed for the picket, and we're still car pooling from the city: text in for a lift, or if you have spare seats text in a time and suburb.
Thank you for your continuing support,

Congratulations to the Visy workers of Dandenong! The workers succeeded in having all charges against them and their supporters dropped and will be getting out of work payments for their time on the picket line. This strike has been an inspiring example from a principled group of men and women!
Workers Solidarity Network

Workers Visy in Victoria, NSW, Queensland and WA have today voted to return to work after securing an agreement from the company not to freeze the pay of casual workers.

Print and packaging workers at Visy sites around the country began protected industrial action two weeks ago, concerned that a pay freeze for new casual workers would undermine their job security.

Visy management and the AMWU returned to the bargaining table on Tuesday after dramatic scenes saw AMWU members stand up against hardline tactics by the company in Victoria on Monday.

AMWU National Print Division Secretary, Lorraine Cassin , said workers were pleased the dispute was over and that they had been able to maintain casual wage rates.

“Our members stood strong and have achieved an outcome that they are happy with. During negotiations since Tuesday, the company also moved on the issue of money and we have been able to secure several improvements including delegates rights.”

The workers’ decision this morning means they will return to work on their next shift, insome cases tomorrow or Monday.