Melbourne's Cross Campus Environment Network (CCEN) organised a rally on Monday outside the office of Premier John Brumby in opposition to energy
company HRL's plans to build a new coal-fired power station in the Latrobe Valley. Apart from a range of speakers condemning the plan, in the interests of
fair play they also invited a representative of the company to answer objections...

Dan Musil of CCEN, the Victorian branch of ASEN, the Australian Student Environment Network, was MC, and began proceedings by acknowledging Aboriginal sovereignty. He went on summarise the reasons for the protest, plans to build a new coal-fired power station at a time when much of the existing infrastructure was reaching then end of its life, and with both state and federal governments preparing to allocate large sums of taxpayers' money towards the project. This would lock the country into dependency on coal for decades instead of investing in renewable energy sources.

First speaker was Victoria McKenzie-McHarg of Environment Victoria, who was both delighted to see so many people present, a sign of widespread community
feeling against the project, but also disappointed that there should be a need to be there at all. Climate change was recognised around the world as one of the greatest challenges humanity had ever faced; we know what is happening, and that coal is the driving force. And yet we are facing the prospect of a new
coal-fired power station in Victoria. She poured scorn on the idea that a power station pumping an additional 4.2 million tonnes of carbon dioxide into the atmosphere every year could be described as 'clean'.

The Environment Protection Agency had been overwhelmed by 4000 submissions from the public,the vast majority in opposition.After detailing the Brumby government's involvement in the project, and the delays it had experienced, she went on to point out that 'this power station, if it goes ahead, will wipe out any pollution cuts that we gain through Premier Brumby's announcement to replace the equivalent of a quarter of Hazelwood Power Station, our dirtiest power station.'
Finally, with reference to the coming election, she suggested that not only could the people, the taxpayers, not afford this new power station, but neither could a government that was struggling to hold on the seats in inner-city Melbourne ...

Next was Erland Howden of Greenpeace. HRL and another 11 coal-fired power staions around the country were a threat to the clean, renewable-energy future that everyone present believed in. Taken together, these stations would be locking the country into 39 million tonnes of greenhouse gas emissions for the next 30 or more years, at the same time locking us out of a renewable-energy future. This was a failure of state and federal government. Another issue was the fact that the big 4 banks provided most of the finance for the existing coal-fired power stations, and are on the brink of providing the finance for these new ones

- in fact using our money to finance this polluting form of power. Greenpeace had started a new campaign to stop these stations by cutting the finance - see

Pablo Brait from Beyond Zero Emissions was the next speaker. He echoed Victoria's sentiments about the insanity of the station, seeing the project as a
failure of leadership on the part of the state and federal governments alike, a failure of courage to stand up to the big polluters and to articulate the kind of future we need. He mentioned the proposal by the Bolivian government to set up a 'climate crime tribunal' similar to the International Criminal Court, to try business and government leaders 'who either through action or inaction cause the climate crisis to worsen. Wouldn't it be something if instead of us standing here protesting, with the police guarding us, we'd be standing here watching the police go into Brumby's office and drag him away in handcuffs?' [Loud applause] Preparing and funding of new coal-fired power stations would be pretty high up on a list of crimes that worsen the climate crisis. This decision was made all the worse because there are alternatives to coal - see

http://beyondzeroemissions.org/zero-carbon-australia-2020 It was not only possible to supply all needs from renewable sources within 10 years, but doing so would also be good for jobs, would in fact double the number of people working in the energy sector - permanent jobs in addition to extra jobs in the construction stage - and still more in related manufacturing. Regarding the upcoming election, it was our task to ensure that the public are informed, and
that no-one votes for a party or candidate who supports the HRL project.

"Carlo Collodi" from HRL introduced himself: 'I'm here today to dispell the myth that you can't polish a turd'. He expressed thanks to Premier Brumby for
allowing him to demonstrate HRL's coal cleaning machine in front of his office.

'We at HRL are very good friends with Premier Brumby. In fact, so close we actually slept together last night. Now, some would call that legal prostitution
[?]; in the industry we call it lobbying."

The coal-cleaning machine can be seen in action at
http://www.youtube.com/watch?v=7QK5O9O93-A

Brian Walters of the Greens put the question, which are we going to choose, carrying on as we have done for the last fifty, sixty or a hundred years, an
unsustainable future, or are we going to choose a sustainable, carbon-positive future which creates jobs and industry which could be the envy of the world? It
was not leadership, to wait for the rest of the world to act and let our renewable jobs and industry go overseas. We need to retool our economy here in Victoria for the kind of future we want for our children and grandchildren.'Coal is perfectly clean ... so long as it remains in the ground. There is no such thing as clean-coal power.' This project was costing us not only a lot of money, it was costing us
our future.

Last speaker was Jasmine Ali of the Melbourne University Climate Action Working Group. Climate change was not just an issue about future generations; the impact is wreaking havoc across the world - floods in Pakistan, fires in Russia were examples. The Australian government had done absolutely nothing, even expanding the very same technologies which had caused the problem. She raised the matter of the Solar Systems factory, the most advanced of its kind in
Australia, which the Brumby government had been prepared to allow to go to waste for lack of investment capital rather than apply government funds to save it. At the federal level, since the election, all the measures that we know are needed had been quietly pushed into the background in favour of the one 'solution' of a carbon price, which was not going to stop the HRL plant going ahead. In this context it was encouraging that the ACTU had put a ban on the
construction of a waste dump on Aboriginal land at Muckaty Station. This was an example of the way to go to stop construction of the project. 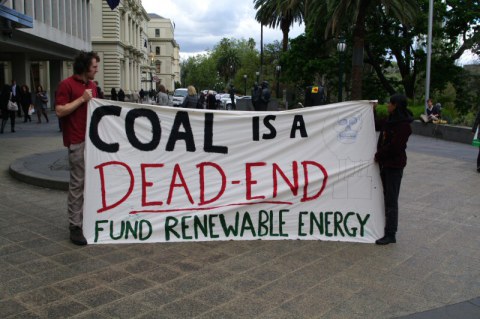 There is video footage of this action on YouTube, in two parts:

"Now, some would call that legal prostitution
[?]; in the industry we call it lobbying."