Stand Fast had another successful barracks speakout against the war in Afghanistan on Thursday, September 9, outside of Brisbane's Gallipoli Barracks – home of the Australian Army's 7th Brigade. Graeme Dunstan from Stand Fast provided great visual impact with huge and striking banners and flags and he also provided the sound through the PA of his Peacebus. Over the 5 hour protest about 20 people attended and helped hand out flyers to the soldiers entering and leaving the barracks with many staying for the entire time. Stand Fast was honoured to incorporate its speakout with the regular Thursday vigil which is conducted outside the barracks by local people who oppose the wars in Iraq and Afghanistan and it was a good chance for the two groups to get to know each other and build links.

The speakout received good media coverage with as many journalists and camera crews present at the start of the speakout as there were protesters. Stories were aired that night on Channel Ten and SBS news programs and was reported online for the Courier Mail, Sydney Morning Herald, AAP, ABC, Brisbane Times and QUT News.

The speakout heard from Stand Fast members Graeme Dunstan and Hamish Chitts and then the mike was made open to anyone who wanted to say something. There were some excellent speakers which you can hear parts of the clip below (courtesy of Ian Curr, Workers Bush Telegraph).

While a small number of passing soldiers were hostile the most encouraging thing was that there were also some soldiers who were brave enough (at the risk of being seen by others) to show their support for the speakout. The overwhelming majority of passing civilians also showed their support. 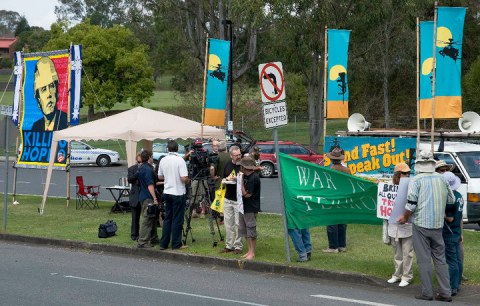