Anti-war campaigners held a vigil at the Elizabeth St entrance to Melbourne Central station during the peak hour rush this evening, holding banners reading "End the Afghanistan War" and "Hit the STOP Button on the Afghanistan War". Although most passers-by were obviously rushing to catch their trains, as can be seen in some of the accompanying photos, many took leaflets, and a few stopped to discuss the issues.

This was one of a series of such vigils, the last having been on 17 August. The leaflet set out '8 Reasons to end the Afghanistan War' as shown in the scanned copy posted below, but also served to advertise a further action planned for the 9th anniversary of the start of the war - a "die-in" at Flinders Street Station and other locations. Further information via email to melb.anti.war@gmail.com

From the callout for this evening's vigil:

Thanks to the unusual election result and the unfortunate deaths of more Australian soldiers, the Afghanistan war has been thrown into the centre stage of politics. In this context the Australian Greens have negotiated an agreement for a coalition with Labor, which included a committment to "a full parliamentary debate on Afghanistan". Given the reluctance of both major parties to have any open discussion about the Afghanistan war, this is definitely a step forward which hopefully open the space for peace activists to call for troops to be withdrawn. Info about the agreement can be found at: http://greens.org.au/greens_labor_deal 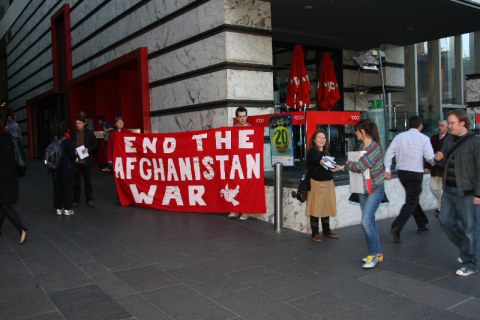 This reminds me so much of the Vietnam war days when I was a student at Sydney Uni. There were some very violent clashes with police though, and the word 'vigil' was only used in Catholic churches. It's only recently become a word in common use. Interesting. But really, same situation exactly; invading someone else's turf; killing civilians (accidentally!?) and generally not allowing the people to choose how they live. Unfortunately most Afghans have no access to the internet or education and so are not living in the modern age. When troops withdraw, they will return to Taliban rule, which is what the people want, but which is a terrible situation for women and girls to live in. Vietnam fought foreign occupation for 116 years; I'm not sure how long Afghanistan has had to put up with this.

I wonder what we will say when the war is over and we hear new stories of the Taliban beating women in the streets for showing their ankles or wearing nail polish, of adulterers and gays stoned to death and other such atrocities. We will no doubt wonder which situation is worse.