How to achieve zero carbon emissions by 2020

Beyond Zero Emissions has utilised pro-bono research by academic specialists in solar technology, mechanical and electrical engineering and economics, over the last two years to produce this report. It shows how Australia could move from being one of the highest carbon emitters per capita to one of the lowest.

Why is this necessary?

Scientists have been saying Australia needs to reduce carbon emissions by 40 per cent by 2020: "the last Intergovernmental Panel on Climate Change report (2007) recommended that developed countries should reduce emissions by 25-40% on 1990 levels by 2020. Yet more recent evidence shows that only reductions at the top end of this range will be sufficient to avoid the worst impacts of climate change." said forty of the world’s leading climate scientists in a statement initiated by WWF and released prior to the Copenhagen Climate summit in December 2009.

"The premise of a 10 year transition is based on ‘The Budget Approach’ from the German Advisory Council on Global Change. In order to have a 67% chance of keeping global warming below 2oC above pre-industrial temperatures, on a basis of equal allocation of emissions on a per-capita basis, it would be necessary for the USA to reduce emissions to zero in 10 years. Australia has the same per-capita emissions as the USA, and would need to pursue the same goal," the plan says.

Both the Labor and Opposition parties are aiming at only a 5 per cent emissions reduction by 2020. This falls far short than what the scientists say is required.

Without any action to set a carbon price electricity prices are set to surge due to the business uncertainty around setting a price for carbon. The audience was told that with business as usual it is estimated $100 billion will be invested in electricity sector in Australia over the next decade. New coal fired power plants may find problems being financed due to the uncertainty. Energy producers are more likely to add gas turbine peaking plants which are cheap to build but expensive to run.

Transitioning to Renewable Energy is realistic and achievable at moderate cost

By comparison, economic modelling shows the Zero Carbon Australia 2020 could be implemented for a total cost of about $370 billion, or $37 billion per year - about 3 per cent of GDP per year for 10 years. Included in this cost is a major extension and upgrade to the electricity transmission grid to make it more efficient. Upgrading the existing transmission infrastructure may also help avoid future bush fires caused by poor maintenaince reminiscent of the Black Saturday bushfire in Victoria.

With the exception of the Bass strait link there was been little work upgrading the electricity transmission grid since the 1970s. The cost of building the transmission grid is estimated at 25 per cent of the total project costs.

It could become a 21st century equivalent of the Snowy Mountains Scheme creating up to 80,000 jobs from installation of renewable energy generation at the peak of construction, and over 45,000 jobs in operations and maintenance that will continue for the life of the plant. Such a scheme would also generate up to 30,000 jobs in manufacturing wind turbines and heliostats.

Many of these jobs could be created close to existing coal fired power stations to provide an opportunity to transition the existing workforce. Such a project would also provide Australia with a manufacturing capacity to export renewable technologies to the region and the world.

The Zero Carbon Australia 2020 report shows us one possible mix of current commercial technologies to realise the goal of zero carbon emissions by 2020. Other plans may choose a different mix using slightly different technology. Solar photovoltaic and emerging renewable technologies such as wave, tidal and geothermal have been explicitly excluded from this plan but may well play an active role as these technologies are developed, commercialised, and rolled out.

The plan calls for 40% renewable energy from wind generation, 60% from large scale concentrating solar thermal power with molten salt storage for 24/7 baseload operation, and backup from Hydro-electric and biomass power generation. The plan specifies sites around Australia that are selected for their wind availability, solar incidence, economy of scale, transmission costs, technical efficency, and geographical diversity: 23 sites for wind, and 12 sites for Concentrating Solar Thermal (CST). The plan is based only on existing commercial technology.

Transferring from coal fired electricity generation will require large public and private investments. To assist this a carbon price needs to be set. An emissions trading scheme - Cap and Trade - is open to volatility which produces market uncertainty for business investment decisions as shown by the European Emissions Trading Scheme.

In a question from the floor about setting a carbon price, one of the speakers said what was needed was a combined system where a carbon tax sets a floor price for carbon pollution, with an emissions trading scheme setting a cap on pollution and issuing permits which can be bought and sold. This would provide a stable floor price to base long term business decisions on, while also setting an upper level on total carbon pollution allowed and letting the market determine the price for pollution permits.

So Australia transitioning to an electricity sector based on renewables with zero carbon emissions by 2020 is possible and achievable for a realistic cost.

Impediments to implementing such a nation building scheme includes the lack of political leadership and will from both sides of politics. Our politicians are also being influenced by lobbyists from the very powerful existing coal and electricity industries. These companies have enormous clout and influence on both State and Federal politicians. The relatively small solar and enewable sector just cannot match the funding and power of the fossil fuel industries. To a question from the floor about how we can bring about this change, one of the speakers said we need people power - the electorate needs to tell our politicians in an unambiguous way of its support for action on climate change and transitioning to renewable energy such as this plan.

There was question from the floor about the funding of Carbon capture and storage (CCS). The speaker from the Melbourne Energy Institute said that the research and development of CCS was also required for countries that will continue to rely on coal fired power generation, and as a process to eventually reduce carbon in the atmosphere by sequestration.

I came away from this launch heartened. Thirty five years ago I helped set up a demonstration solar hot water system on the lawns of parliament house in Canberra. Alternative and renewable technology was dismissed as the margin, especially by politicians then. Will our political leaders listen now? I hope so, especially if you support Beyond Zero Emissions ongoing work and tell your Federal and State politicians that we need to transition to a zero carbon pollution economy and society.

You can download the full report as a PDF (8.5MB) or download or purchase a glossy printed copy from The Melbourne Energy Institute, Melbourne University for $30 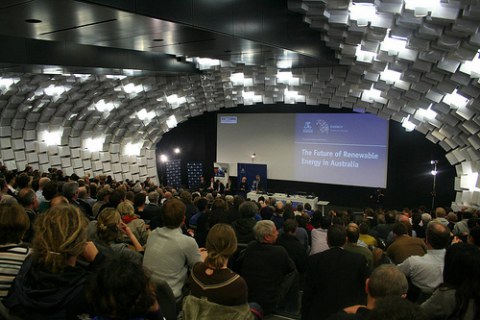 Great wrap-up of the event. I asked the question regarding carbon capture and storage, but I don't think it was satisfactorily answered. Research certainly is needed to establish whether CCS can be made to work for the coal-burning that will unfortunately continue for some time yet, but it should not divert public funds away from an urgent transition to 100 per cent renewables. The coal industry should be footing the bill to find ways to clean up its dirty product, which currently leads not only to high emissions, but also to a range of other environmental and health impacts.

At this stage, CCS is nowhere near the maturity of the renewable technologies presented by the Zero Carbon Australia 2020 Stationary Energy Plan. In fact, the plan throws down the challenge to Martin Ferguson to point us to any similar work that demonstrates the viability of CCS with anywhere near the same rigour. It's a challenge he's doomed to fail, and CCS is currently an expensive excuse to continue digging up coal and flogging it off at the expense of the climate and the environment. As Guy Pearse noted in his recent essay for The Monthly, "King Coal", Australia is on track to become the world's largest exporter of carbon. With the ZCA 2020 Plan, we should instead be aiming to become the world leader in renewable know-how.

Darren,
thanks for that comment. I have put a link to the Northcote Independent article near the top of the story.

I think the answer to you question was because of the politics of the Melbourne Energy Institute. They can't be seen to reject CCS, even though they probably all know it's bulls---.

Many thanks for the link. Re the politics of the Melbourne Energy Institute, I would like to have challenged them to state what they consider to be the maturity of CCS relative to the proven technologies presented. I don't think it's credible to put CCS on the same level, and when action is required within an urgent timeframe, I think we have to go with what we know does work. I thought the Four Corners program, "The Coal Nightmare", was a pretty good look at CCS. Of course, even if that issue is solved, we have the other health and environmental impacts - for example in the Hunter Valley, and also in places such as the Apalachians in the US (see Yale Environment 360 for a disturbing video).

Thanks again for the link, and the excellent wrap-up here. I hope Beyond Zero Emissions will put up some video on its site - seems likely given all the cameras. Good to get lasting benefit from such a valuable event.

An interesting critique of the ZCA 2020 is being compiled here ->

All oceans will boil away and all life will be destroyed