Below is an account of the Ark Tribe Court Case from the CFMEU website an update from the 16th.
Ark Tribe Court Case, June 15
1500 people turned up this morning on June 15 in Adelaide, in support of Ark Tribe’s court appearance.
Proceedings began with a minute’s silence to commemorate work mates killed on site before several speakers took to the stage to voice their protest over the ABCC and their treatment of Ark.
Two of the loudest cheers came for Paddy Hill (Birmingham 6) and Gerry Conlan (Guildford 4). Both had been unjustly imprisoned for several years in the UK before being exonerated. They came all the way from Scotland and Ireland to show support and voice their disgust at a possible similar injustice.
Ark, charged with allegedly failing to attend an ABCC interagation, was thankful for the support as he took to the podium. He took time to thank his mum Anne and son Jake, who were in attendance, while also saying a big thanks to the CFMEU.
As a show of solidarity, several members and supporters formed a guard of honour by holding union flags aloft, as Ark and his lawyer Steven Dolphin, made their way to the Adelaide Magistrates court.
Many members yelled, clapped and cheered their support as Ark walked past, some offering handshakes and pats on the back as encouragement.
A harmonica player standing outside court fittingly played ‘Waltzing Matilda’ as Ark entered the building to more cheers of encouragement.
http://www.cfmeu.asn.au/news/ark-tribe-court-case-june-15

Ark Tribe Court Case Update
Inside the Adelaide's Magistrate's court today, the lawyers began their defence of Ark Tribe, a normal construction worker accused of nothing more than failing to attend an interrogation by the Construction Star Chamber for the Australian Building and Construction Commission.
Lawyers argued that the ABCC had not correctly begun the prosecution - as the proper authority did not exist. As a result they said the charges should be thrown out.
Lawyers for the Commonwealth DPP contested the argument and the magistrate moved for an adjournment.
Both sides will now make written submissions on the matter, with the court reconvening tomorrow at 2pm.
It is expected that the magistrate will tomorrow make a determination on this particular issue.
If the arguments of Ark's lawyers are upheld, the case will end. If not, it will continue with both sides making arguments on substantive issues.
Workers, members of the broader community and unionists, were out in force outside and inside the court in support of Ark and against the ABCC.
CFMEU National Secretary Dave Noonan said today, "If Ark goes in; construction workers across the country would go out."
http://www.cfmeu.asn.au/news/ark-tribe-court-case-update 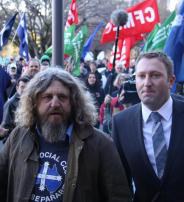 With Ark's hearing not listed on Thursday, it was left until Friday before a ruling was made on the CFMEU's day 1 argument that the ABCC staff member who laid the charges against Ark Tribe was not authorised to do so and as such charges should be dropped.

With hundreds gathering outside the magistrates court in the centre of Adelaide, the mood as buoyant; there was a feeling that this might be it, that the charges would be dropped and Ark would be able to get back to a normal life and back on the job.

Sadly, it wasn't to be. Magistrate David Whittle found that the ABCC assistant commissioner, John Draffin, was entitled to lay the complaint against Tribe and that the trial would continue. CFMEU State Secretary Martin O'Malley emerged at around 10.30am, closely followed by the union's National Secretary, Dave Noonan. They told Ark's supporters and the assembled media that the trial was to proceed and that Ark had plead not guilty to the charges.

As he did on day one of the trial, Noonan threw down the gauntlet: "If Ark Tribe is jailed, the CFMEU will take action right around the country". Mr Noonan also sent a warning to the ABCC and to employers, some of whom had threatened to sack workers for turning up to the court to support Ark Tribe.

"Construction workers will not be intimidated by those sort of threats. We will not be held down by employers who want to hide behind these draconian powers. Ark is our friend, he's our comrade, he's one of us and we will be here for him as long as it takes and as hard as it gets."

The support for Ark Tribe from the trade union movement and the wider community has been building since his case first came to light. The CFMEU National Secretary told workers it must continue.

"All of us need to know that Ark is walking in our shoes, he cannot walk alone and this law cannot be allowed to stand," Noonan said.

With much time taken up deliberating on the CFMEU's attempt to have the charges dropped, the case was destined to be adjourned to a later date. Later on Friday afternoon, Magistrate Whittle set down July 21 and 22 for the continuation of the trial.
http://www.arkstribe.blogspot.com/