On Monday 14 of June 2010 took place a solidarity intervention for Jock Palfreeman in The Hub, Newtown. We occupied the square for several hours, displaying banners and flags, handing out many texts (below), and playing anarchist and anti-fascist music. There will be a screening of a documentary about Jock's situation- "One Night in Sofia" at Black Rose 22 Enmore rd, Newtown 8pm 16/6/2010

Jock Palfreeman is a 23 year old antifascist from Australian currently in prison in Sofia, Bulgaria. He is accused of murder and attempted murder, following an encounter with a group of 16 far-right football hooligans. After 2 years of trial he was sentenced in December 2009 to 20 years imprisonment and forced tp pay a $350 000 fine.

In December 2007, Jock witnessed a gang of fascist football hooligans attacking two Roma men in Bulgaria’s capital, Sofia. Jock went to the aid of the men, putting himself in the middle of the attack. The Roma were able to escape, but the gang then turned on Jock. The fascists kicked and punched Jock, and then started collecting pieces of broken concrete and throwing them at his head. Jock was alone, and forced to defend himself against the gang of 16 drunken, violent fascists. As a result, one fascist (Andrei Monov) was killed and another (Anton Zahariev) injured. Monov’s father, Dr Hristo Monov, is a prominent Bulgarian doctor, with ties to the government and contacts in the legal system. The enormous $350 000 fine is being used as a ransom to prevent his extradition.

Jock has been in prison for two years. Police have beaten and threatened to kill him, and have openly lied about his case in court. Much of the evidence that supports Jock’s version of events has been destroyed or has gone missing. For example, a CCTV video tape which showed the brutal attack on Jock has been “lost” by police and then been retrieved, only to mysteriously explode — again while in police custody. The Bulgarian media has labeled Jock a murderer and a hooligan, and has consistently and systematically published lies and distortions about Jock and his case. The court has been repeatedly delayed due to witnesses and court officials failing to turn up. The enormous $350 000 fine is being used as a ransom to prevent his extradition.

Attacks against Roma in Bulgaria have spiked in recent years, and the far right has declared that the eradication of Roma from their territories is of utmost political importance. Their anti-Roma campaigns include both propaganda and violence. In February 2009, local fascists organised a rally in Sofia, demanding that Jock be prosecuted to the fullest extent of the law.

We denounce the despicable conditions Jock has been forced to endure, and without hesitation raise our voices in a firm declaration of solidarity. Jock has dedicated his life to fighting against fascism, and is now facing 20 years in a Bulgarian jail because he chose to try to stop a fascist attack.

Of course we expect nothing else from the so called “Justice System”; the laws, the judiciary, the police, the prosecutors and all the various mechanisms and institutions which serve the interests of capital and the state. We are not interested in the construction of “innocent” and “guilty” by civic legality and all its lackeys; those who continually attempt to marginalise and criminalise comrades who with dignity fight for freedom and defend the persecuted.

Like every captive of the state, Jock is not alone. Our acts of solidarity for each other turn out to be acts for all. They affect all the exploited, inside and outside the prisons of capital in our common need to throw down the walls of oppression and misery everywhere, we know true “justice” will not exist until the destruction of all prisons and the culture that creates them.

NO ONE HOSTAGE IN THE HANDS OF THE STATE

NO COMPLACENCY AGAINST FASCISM 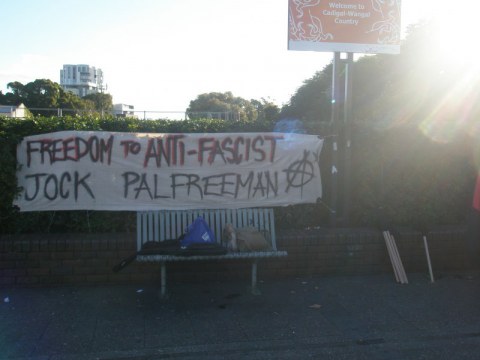 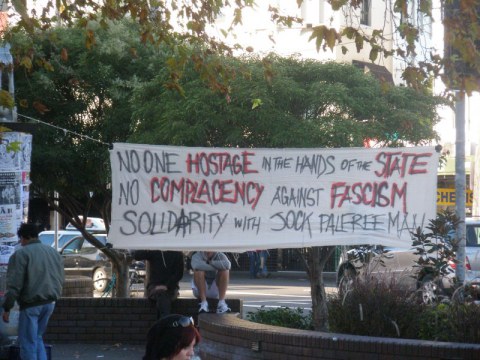 I am no anti-fascist, anarchist or anti-authoritarian, I am but a citizen who believes in justice.

Although I applaud your stand (and I DO), be careful when constructing your dialogue (i.e. here on this page)so that it doesn't marginalise the issue (by using rhetoric or inflammatory language). I'm aware that appealing to the populous is not your aim, however in this case the best thing for Jock would be wide spread support (the whole community).

Believe it or not there those of us who care and will act in defence of liberty and justice although we may look like 'conformists'.

Just have a think about it