Next weekend Australians will once again be celebrating the Queen’s Birthday with a public holiday. It is ironical a page in Australian history that occurs around the same time that is far more significant for Australians than the Queen’s Birthday will be largely ignored by Australians. On the 3rd June 1992 the Australian High Court found that indigenous Australians had rights to land in law because of their occupation of this continent before Captain James Cook in 1770 claimed Australia as property of the British Crown. The 3rd June 1992 marks the beginning of a reconciliation process between indigenous and non-indigenous Australians that is based on justice, not charity.

Eddie Mabo, a Torres Strait Islander from Mer, working as a gardener at James Cook University in Townsville had a decade previously initiated a legal challenge that eventually ended up in the High Court of Australia. His legal challenge once and for all buried the legal fiction of “terra nullius” – that this land was not occupied before European colonisation began. It challenged the illegal occupation of Australia by the British Crown. The High Court, in its decision, recognised that indigenous Australians had rights to land in European law because of their prior occupation of this continent.

Eddie Mabo never lived to hear the High Court judgement, his grave was moved to Mer in the Torres Strait from Townsville when it was vandalised by Australians who opposed the judgement. Within a few years of the Mabo High Court decision legislation was passed in the Federal Parliament that not only attempted to bury the judgement with bucket loads of legal extinguishment it also made it almost impossible for indigenous Australians to use the law to claim the very rights they had won in the Mabo judgement.

Take a holiday on June 3rd to celebrate a great Australian, Eddie Koiki Mabo, who overturned the two century fiction of Terra Nullius in a ten year campaign though the Courts ending in the historic High Court Mabo Judgement on June 3 1992. 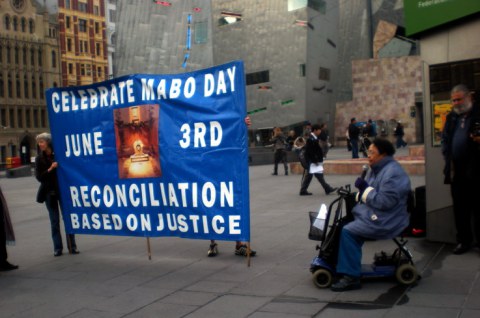 Thanks for posting this reminder about Mabo Day. I for one was not aware of the importance of the date. Its amazing how quickly things are written out of the mainstream history and conscience.