Macquarie Generation initially refused to accept the summons. "I was totally taken aback” said Mr Gray. “I handed it over to a representative of the company and then as I was leaving he came back and returned it to me, saying his CEO had instructed him not to accept it. Macquarie Generation appear to be taking the same approach to this legal action as they took to the issue of climate change: close your eyes and hope it goes away,” said Mr Gray. "Refusing a summons is something you might expect of a petty thief, not a major corporation”.

The climate activists are being represented by the NSW Environmental Defenders Office. The activists alledge Macquarie Generation wilfully or negligently disposed of waste by emitting carbon dioxide from Bayswater between 2002 and last year and those emissions contributed to global warming and ocean acidification.

This last week Justice Pain of the Land and Environment Court has handed down a complex judgement dismissing one argument put forward by the pair that Macquarie Generation, under its license, did not have permission to emit carbon dioxide.

However, a second argument put forward by the environmentalists - that if Macquarie Generation had permission, then it was not unlimited and must have reasonable regard for other people and the environment - was found to have validity. Justice Pain said "The focus of the case will be on whether there are implied limitations as contended by the Applicants on the emission of CO2 separately from the licence as a matter of law and, if these limitations exist, as a matter of fact".

The case is now likely to proceed to a hearing. Peter Gray told the ABC "Justice Pain made a more complex decision than we could have asked for," he said. "She said the power stations do certainly have a right to emit carbon pollution. However, whether that extends to them emitting to the extent that they do is another question that's yet to be argued. I certainly see it as success for our side in that Macquarie Generation asked to have ... the case thrown out of court and that hasn't happened."

Bayswater Power Station shares the title of being Australia's largest power station with Eraring Power Station. Much of the coal is supplied by overland conveyors from mines it shares with the nearby Liddell Power Station. Water for cooling comes from the Hunter River and upper Manning River Catchment.

The New South Wales Labor Government has approved this month plans for construction of 2 new fossil fuel Power Stations at Mt Piper near Lithgow and Bayswater B Power station. Greens MLC Dr John Kaye criticised the decision saying “Coal-fired stations will increase the state’s greenhouse gas emission by 15.1 per cent and gas by 7.1 percent. This is an unacceptable increase to the state’s burden on the climate. The Keneally government is turning NSW into an international greenhouse pariah. The future of jobs in the clean energy industry has been dealt a savage blow." he said in a media release.

Read an in depth analysis of the case by Brendan Bateman and Brendan Dobbie from law firm Clayton Utz who acted for Macquarie Generation in the proceedings : A licence to change the climate? Court considers whether licence permits emission of carbon dioxide 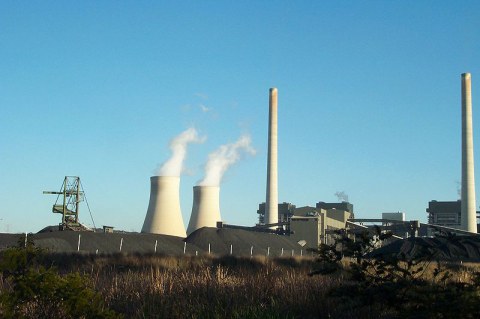