We already gave the Danes a princess - give us back our protestor!

Danish authorities are continuing to detain an Australian, Friends of the Earth activist Natasha Verco, for a third week since the Copenhagen climate conference. She will appear in court in Copenhagen on Monday January 4th 2010.

The Copenhagen meeting was an abject failure - with rich countries like Australia pushing false solutions of offsetting and carbon trading, and avoiding urgently needed emissions reductions. But instead of taking action, the authorities locked up those who actually were.

Natasha was arrested on Tuesday December 15th, a day before the major 'Reclaim Power' protest during the United Nations climate negotiations in Copenhagen, Denmark. She is being charged with "incitement" for her role in organising the climate justice protest.

Tadzio Mueller, a German arrested alongside Natasha, said on his release from custody, "The Danish government's appallingly disproportionate reaction, the political policing used to gaol some 1800 activists for nothing at all; using tear gas, pepper spray, baton charges and mass preemptive arrests; sets a precedent dangerous not only for Denmark, but for the future of the world."

Tash Verco is a long-time advocate for social change in Sydney, Australia. She is a graduate of the University of Technology honors program in Social Inquiry; a founder of Rural Australians for Refugees; and a co-founder of Friends of the Earth Sydney.

A direct appeal to the Danish Consul General in Sydney, Michael Hansen, will be launched as Friends of the Earth Sydney will hand-deliver a personal letter. The letter asserts the right to protest as a fundamental human right, and demands the charges against Tash and all other climate justice activists be dropped and they be immediately released.

If in Sydney: Free Tash! Solidarity action this Monday 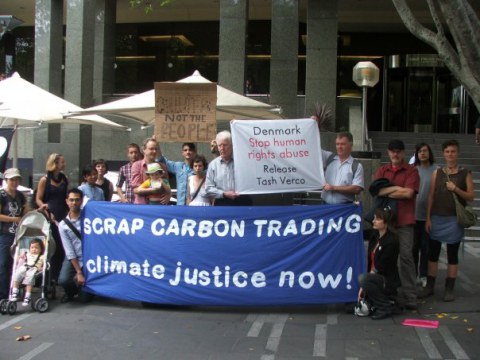 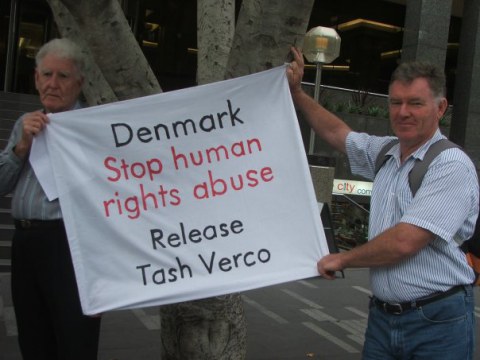 How to Write Letters to Demand Natasha's release

Suggested wording for a letter

Dear Royal Danish Embassy Ambassador: Her Excellency Mrs Susanne Wagner Hoffmann Shine,
I am emailing in regards to the case of Australian Natasha Verco who is currently imprisoned in your country. Natasha has been charged with "incitement" and held since December 15th for her role in organising legitimate protest at the Copenhagen Climate Change Conference. The harsh treatment of Ms Verco and other peaceful protestors in Copenhagen has caused myself and many others to question Denmark's committment to the democratic principles of freedom of association and freedom of expression. I feel very strongly that to prosecute and detain someone for expressing these rights is very unjust. For this reason I call on you to do everything in your power to pass on the concerns of many Australians to the Danish Government about the treatment of Natasha Verco and to pass on the request that she be released from custody immediately and all charges related to her legitimate political activism be dropped.
Yours sincerely,

Denmark's Tasmanian-born Princess Mary is being urged to intervene in the case of an Australian protester who has been held in a Danish jail since the Copenhagen climate summit.

Friends of the Earth spokeswoman Holly Creenaune says fellow campaigner Natasha Verco was arrested over the protests at the summit last month and has now been held in detention for more than three weeks.

About 25 protesters gathered outside the Danish consulate in Sydney to demand Verco's release this morning.

They were planning to deliver a letter to Princess Mary calling for all the charges to be dropped.

The Department of Foreign Affairs has confirmed it is assisting Verco.

Ms Creenaune says she understands Verco will appear in a Danish court today, but neither she nor the woman's family has been able to get in touch with her.

"It's our information that Natasha has been charged with an incitement charge, basically an incitement to get people to come to a protest," she said.

"Danish people are alleging that she was organising for a protest that was going to be violent. But that protest was organised as a non-violent protest."

Greens leader Bob Brown says the Government should know more about why the environmental campaigner is being detained.

"The Federal Government should know a lot more about what is her plight," he said.

"They say that she is getting assistance, that's one thing, but reassuring Australians about what the charges are, why it is that she's being held for weeks without having any judgment against her, is very important."

The Greens are calling for the immediate release of an Australian environmental activist held by Danish authorities since December's Copenhagen climate summit.

Natasha Verco was arrested during summit protests on December 15, and has since been charged with incitement for her role in organising the demonstration.

Greens Senator Scott Ludlam said the Danish authorities had been "heavy-handed" in their treatment of the activist.

"Natasha Verco ... was arrested, along with many others, for the crime of helping organise a peaceful demonstration in Copenhagen," he said in a statement.

"I have written to the Danish Consul General demanding her immediate release.

"It is utterly perverse that people seeking to give voice to community demands for action on climate change should pay this kind of price."

Letter from our friends in prison

Copenhagen, January 1st 2010: Something is rotten (but not just) in Denmark. As a matter of fact, thousands of people have been considered, without any evidence, a threat to the society. Hundreds have been arrested and some are still under detention, waiting for judgement or under investigation. Among them, us, the undersigned.

We want to tell the story from the peculiar viewpoint of those that still see the sky from behind the bars.

A UN meeting of crucial importance has failed because of several contradictions and tensions that have shown up during the COP15. The primary concern of the powerful was the governance of the energy supply for neverending growth. This was the case whether they were from the overdeveloped world, like the EU countries or the US, or from the so-called developing countries, like China or Brazil.

At odds, hundreds of delegates and thousands of people in the streets have raised the issue that the rationale of life must be (and actually is) opposed to that of profit. we have strongly affirmed our will to stop anthropic pressure on the biosphere.

A crisis of the energy paradigm is coming soon. The mechanism of the global governance have proven to be overwhelmingly precarious. The powerful failed not only in reaching an agreement on their internal equilibria but also in keeping the formal control of the discussion.

Climate change is an extreme and ultimate expression of the violence of the capitalistic growth paradigm. People globally are increasingly showing the willingness of taking the power to rebel against that violence. we have seen that in Copenhagen, as well as we have seen that same violence. Hundreds of people have been arrested without any reason or clear evidence, or for participating in peaceful and legitimate demonstrations. Even mild examples of civil disobedience have been considered as a serious threat to the social order.

In response we ask – What order do we threaten and who ordered it? Is it that order in which we do not any more own our bodies? The order well beyond the terms of any reasonable “social contract” that we would ever sign, where our bodies can be taken, managed, constrained and imprisoned without any serious evidence of crime. Is it that order in which the decision are more and more shielded from any social conflicts? Where the governance less and less belongs to people, not even through the parliament? As a matter of fact, non-democratic organisms like the WTO, the NB, the G-whatever rule beyond any control.

Since no real space is left in the broken theatre, we reclaimed our collective power – Actually we expected it – to speak about the climate and energy issues. Issues that, for us, involve critical nodes of global justice, survival of man and energy independence. We did marching with our bodies.

We prefer to enter the space where the power is locked dancing and singing. We would have liked to do this at the Bella Center, to disrupt the session in accord with hundreds of delegates. But we were, as always, violently hampered by the police. They arrested our bodies in an attempt to arrest our ideas. we risked our bodies, trying to protect them just by staying close to each other. We value our bodies: We need them to make love, to stay together and to enjoy life. They hold our brains, with beautiful bright ideas and views. They hold our hearts filled with passion and joy. Nevertheless, we risked them. we risked our bodies getting locked in prisons.

In fact, what would be the worth of thinking and feeling if the bodies did not move? Doing nothing, letting-it-happen, would be the worst form of complicity with the business that wanted to hack the UN meeting. At the COP15 we moved, and we will keep moving.

How the COP15 has ended proves that we were right. Many of us are paying what is mandatory for an obsessive, pervasive and total repression: To find a guilty at the cost of inventing it (along with the crime perhaps).

We are detained with evidently absurd accusations about either violences that actually did not take place or conspiracies and organizing of law-breaking actions.

We do not feel guilty for having shown, together with thousands, the reclamation of the independence of our lives from profit’s rule. If the laws oppose this, it was legitimate to peacefully – but still conflictually – break them.

We are just temporarily docked, ready to sail again with a wind stronger than ever. It’s a matter of love, justice and dignity.

Re: Ruling class princess and worst of all Danish

When are sheeple going to get a grip on the nonsense of alleged royalty by some persons and alleged religion by some person? All just propaganda, all placed there by the ruling class? We never gave the danes a princess, she gave herself to a dane and they are no special than anyone else unless you people give them the status. Otherwise we are all equal and in the same boat. Why I mentioned religion was because it's a very similar lie. These lies are meant to control the population. Sheep!

Dude, the line about the princess is a joke / pisstake, not an actual appeal to the Danish State / Crown Princess on account of her Australian state citizenship.