Police used capsicum spray and horses to stop a group of protestors forcing their way into a hotel in Melbourne where Julia Guillard was greeting Israel's current deputy PM and ex-PM Ehud Olmert. Three protestors were also arrested. The protest was organised by Australians For Palestine

In a possible first for Melbourne on Sunday 6th December, Melbourne Police used capsicum as a form of crowd control at a demonstration. Capsicum spray was given to Victorian police under the guise of preventing police shootings but not surprisingly is now being used as a way of controlling dissent.

The incident happened as a group of demonstrators almost got into Park Hyatt Hotel where the an Australia-Israel Leadership forum event was being held. The crowd had gathered to denounce Australian Government support for the Israeli government and to confront the Israeli politicians present. Ehud Olmert was the Prime Minister of Israel who ordered the military attack on the Gaza Strip, a potential war crime currently being investigated by the U.N.

The Age reported Michael Shaik, public advocate for Australians for Palestine, as saying the group was outraged by ''the hosting of an Israeli delegation at a time when Israel is coming under huge pressure from the rest of the international community to investigate war crime charges regarding its conduct in Gaza and to freeze settlement construction in the West Bank and East Jerusalem''.

The Israeli National News reported another demonstrator as saying Hisham Moustafa, demonstrators were trying to send a message to the Australian deputy prime minister. "I don't think she would be supporting Hamas coming to Australia," Moustafa said. "So we expect more from our representatives, and we think that Julia Gillard, by entertaining the Israeli politicians at the moment, sends a message that the Palestinian people are just being forgotten by Australia."

Three demonstrators actually got into the hotel lobby and were promptly arrested. Interestingly a great picture of capsicum spray being used by the police appeared in Monday 7th Age but did not appear on their online edition. I could not find any photo's of the spray being used online to use in this article despite them obviously being available to the press.

Read More at The Age
http://www.theage.com.au/national/capsicum-spray-used-to-quell-antiisrae...

For a pro-Israel perspective on the protest read
http://www.israelnationalnews.com/News/News.aspx/134823 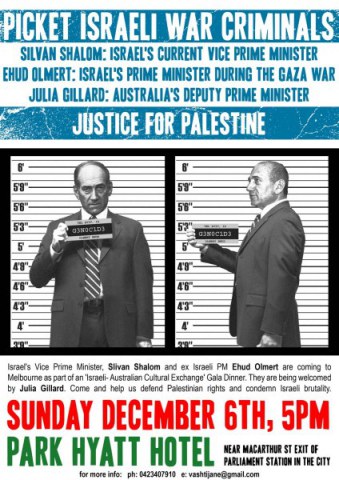