Police files on desalination protestors given to private corporations

Victoria Police have handed over information on Desalination protesters to AquaSure, made up of international and local companies Degremont, Suez Environment, Thiess and Macquarie Capital Group. The 20 page Memorandum of Understanding was signed on August 28 by the Department of Sustainability and Environment, Victoria Police and AquaSure. Victoria Police have said it was routine for police to sign such deals with organisations building big public projects where there were potential security risks.

In the latest deal Victoria Police have agreed to hand over photos, video recordings and other police records to the international consortium AquaSure to help it ''manage'' protests and potential security threats, to protect the site at Wonthaggi as well as the electricity supply to the project and new pipelines from the plant to Cardinia Reservoir.

According to the Age report the memorandum says: ''Law enforcement data may take the form of any text, images, audio and video, may be stored on computing devices, in hard copy, or on other storage media, and includes (but is not limited to) data related to individuals, aggregated data, written reports and correspondence, memoranda, police diaries, official notebooks, running sheets and other data repositories.''

Chris Heislers from Watershed Victoria which has been campaigning against the Desalination Plant was reported as saying ''We are normal, law-abiding citizens and we've done nothing that deserves our own private information - whether it's photos or any data - being released to a private company,'' Mr Heislers said. ''It will make everyone feel like they're just being watched constantly, when all we're trying to do is keep the company as honest as possible, to keep this building project within reasonable environmental standards.''

Opposition Leader Ted Baillieu told the Age "John Brumby and his Government have repeatedly shown that they cannot be trusted to protect the sensitive personal information and records of Victorians. Now we discover this appalling breach of the public's trust," he said.

Also reported by The Age, Liberty Victoria president Michael Pearce, SC, said ''This seems to be a part of the Government's heavy-handed response to relatively low-level protest activity which is a part of the democratic process in relation to a project of enormous public significance,'' he said. Mr Pearce also called the Government's introduction of new penalties for climate change protests against coal-fired power stations as another example of heavy-handed action.

The Police Special Branch may have been disbanded in 1983 but police continue to build dossiers on community groups and protesters. Computer databases have added to the capacity to store and cross reference information on people challenging Government policies or projects. Police now use video at many protests. All this information will be shared with private corporations.

Greg Barber, Greens MLC condemned in parliament on 25 November the increased penalty of Two years jail for coal plant protests. In the Electricity Industry Amendment (Critical Infrastructure) Bill 2009 debate he said "We know there is a crime being committed here, and it is really just a matter of time before the right legal framework comes into place to address that crime and that fundamental question of justice. The governments of this state and of this nation are running a protection racket for shareholders in polluting industries against the public's overwhelming desire for action to protect the local and world communities from the immediate devastating effects of climate change that we are seeing."

The Brumby Government has been quick to trample on the privacy and rights and liberties of its concerned citizens but has been very slow to act on climate change. We are still waiting for the promised introduction of a comprehensive greenhouse bill into Parliament, while greenhouse intensive policies continue such as building the energy intensive Desalination Plant, continuation of policies supporting the extremely dirty brown coal fired power stations, and plans to export brown coal, while not supporting a a gross feed-in tariff for solar power to encourage investment in solar electricity. 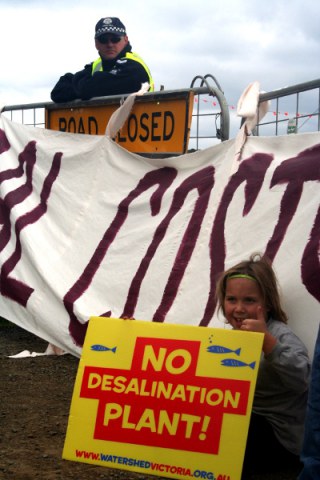 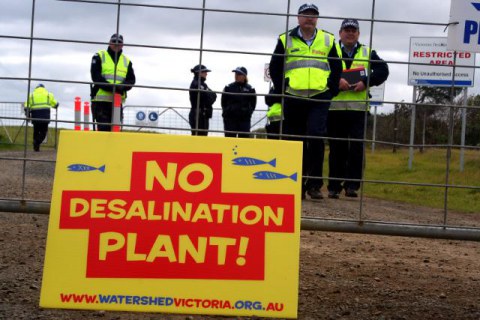 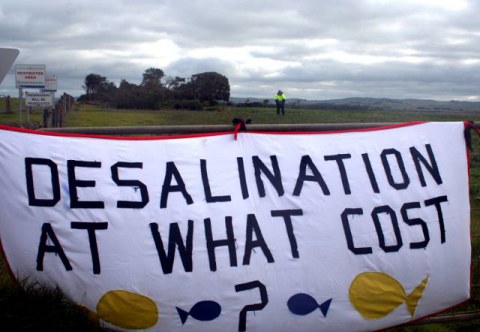 MILLIONS of dollars worth of land has been excluded from the official price tag on Victoria's desalination plant, with a series of peppercorn rents hiding the full cost of the project.

The private consortium entrusted with building and operating the Bass Coast plant has been given a 32-year lease on a massive strip of coastal land for the sum of $1.

Contract documents are littered with other peppercorn rents, including a three-year lease of a section of crown land for $1500, and another $1 fee imposed on 27-year rental of pipe structures built for the project.

The $1 land fee belies a compulsory acquisition process that saw the Victorian Government negotiate financial settlements with a host of often devastated landowners.

The Age understands that around 263 hectares of farm land, residential land and tourist accommodation was purchased by the Government at costs deemed to be ''market rates'' by the valuer-general.

Local real estate agents estimated that buying those properties would have cost the Brumby Government close to $10 million; shortly before the project was announced in 2007, a 58-hectare property within the desalination site was sold for close to $2 million.

Opposition Leader Ted Baillieu said excluding the cost of buying the land undermined confidence in the official price tag placed on the desalination plant by the Brumby Government.

''While Victorians are struggling with record water bills, multi-national companies will be gifted millions of dollars of land virtually rent free, courtesy of John Brumby,'' he said.

''This deal shatters John Brumby's claim that the financing model for the desal plant delivers value for money for Victorians. It is clear this Government cannot be trusted.''

Household water bills have already risen because of the cost of building the plant, but charging higher rents to Aquasure would only increase the cost burden on ordinary Victorians, the Government said.

The land will revert back to public ownership at the end of Aquasure's lease.

The Government says that building the project as a public-private partnership is about $1 billion cheaper than if the Government had built it without external assistance.