Hundreds of building workers rallied in cities across Australia on Friday, October 30, in support of Adelaide construction worker Ark Tribe, who is charged with 'failing to attend to answer questions' at the Australian Building and Construction Commission (ABCC) about a stop-work meeting. The commission has the power to compulsory interrogate and impose fines and jail building workers who do not co-operate. A Jail term of up to 6 months could be imposed.

Members of the Construction, Forestry, Mining and Energy Union (CFMEU) are threatening national industrial action if the South Australian worker is sentenced to jail. The union movement have pushed for the abolition of the ABCC since the election of the Labor government in 2007. The commission was created by the Howard Government in 2005, to destroy the industrial militancy of the building industry unions. The Rudd Government has kept the Commission going and is about to transfer the Commission powers to a new a Building Industry Inspectorate within the Workplace Relations Department with little change to the coercive powers.

In Adelaide about a thousand workers rallied outside the Magistrates Court where Ark Tribe was appearing - the third court appearance since August. The crowd chanted "one law for all" and heard from SA CFMEU Construction & General Secretary Martin O'Malley, CFMEU Federal Secretary, Construction & General, Dave Noonan and historian Humphrey McQueen. McQueen quoted Samuel Champ, BLF organiser from Hobart in 1916:

"Our liberties had not been won by mining magnates or stock-exchange jobbers, but by genuine men of the working-class movement who had died on the gallows and rotted in dungeons and were buried in nameless graves. These were the men to whom we owed the liberties we enjoyed today."

Dave Noonan told the crowd that the Federal Executive of the CFMEU had determined that industrial action would be taken on building sites acrorss the nation should Ark or any other construction worker be jailed under the powers of the ABCC.

CFMEU SA secretary Martin O'Malley was reported in the Independent Weekly saying "The ABCC is seeking to penalise workers who've committed no crimes, while companies continue to get away with appalling rates of workplace death and injury due to shortcuts on safety and shoddy standards," he said. "The sickening irony is that workers are regularly killed and injured by company negligence, but it's workers who face jail if they dare to stop work after a fatality."

A rally of about 200 people in Melbourne occurred at 533 St Kilda Road outside the offices of the Australian Building and Construction Commissioner, John Lloyd. The rally was chaired by VTHC Secretary Brian Boyd (see report with photos on VTHC website)

Attending the Melbourne rally, Jeff Lawrence, Secretary of the Australian Council of Trade Unions (ACTU) said industrial action would be undertaken "...to express our outrage that in modern time a worker can be threatened with six months imprisonment simply because he attended a health and safety meeting and raised health and safety issues," he said. "So it's a protest against these draconian special laws."

“Building and construction workers should be able to go to work each day like everyone else without fear that they could be jailed simply for exercising their civil rights as union members,” Mr Lawrence said. “Yet that is exactly the situation Ark Tribe finds himself in."

“There were serious safety issues at his worksite which he raised concerns about. Next thing, he found himself ordered to appear before an ABCC interrogation. For refusing to tell the investigators about what took place at a workplace safety meeting, he could end up in jail for six months. These types of coercive powers have no place in Australian worksites. There should be one set of laws for all workers, regardless of their job." said Lawrence.

Lawrence detailed that there are established laws to deal with criminal behaviour, "but additional coercive powers in the construction industry are oppressive and an infringement of basic rights. The ABCC was set up by the Howard Government and its track record shows its sole purpose is to demonise and persecute building workers. It has made no contribution to improving safety or productivity in the industry and should be immediately abolished.”

In Geelong a crowd of about 100 construction workers gathered outside local Labor MP Richard Marles' office to protest the ABCC prosecution of Ark Tribe. The rally was addressed by Noel Washington who avoided prosecution by the ABCC in November 2008 after a union solidarity campaign. Marles' office was occupied for a short time reported Greenleft.

In Sydney about 1000 workers marched from the Unions NSW building to the headquarters of the ABCC in city centre. CFMEU national secretary John Sutton told the rally "We've endured six long years of persecution under the ABCC. The Howard government brought in these laws but we can no longer blame Howard because we still have these laws under a Labor government." reported Greenleft.

According to a report in the Australian Julia Gillard, the Federal Workplace Relations Minister said "The Rudd government's new Fair Work Act ensures that industrial disputes are governed by clear, tough rules," she said. "Under Fair Work, industrial action will only be protected during bargaining and if it has been authorised by a mandatory secret ballot."

The International Labour Organisation has condemned the ABCC and the Building and Construction Industry Improvement Act 2005 (BCII Act) for breaching international labour standards. In March, the ILO called on the federal government to suspend all ABCC operations. Current amendments to the BCII Act will transfer the ABCC to a Building Industry Inspectorate, with the power to prosecute and compulsorily obtain information and documents from relevant parties. Most of the ABCC’s draconian powers, including imposition of fines and mandatory jail sentences for non-cooperation, will also be transferred.

The hearing on October 30 was adjourned with Ark Tribe due back in court on December 18 to allow the prosecution to respond to the Defence request for further information. 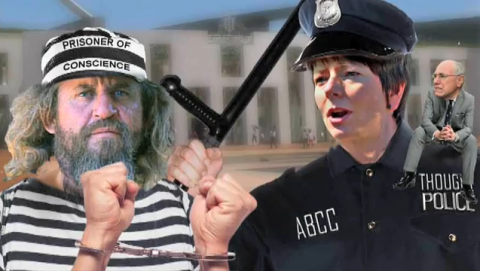 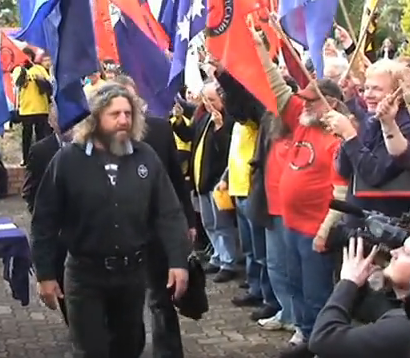 As on indymedia in Perth, but where is Brisbane/Qld ?