The Federal Parliament committee report on rising sea level caused by global warming has been welcomed by Friends of the Earth (FOE). Damien Lawson, National Climate Justice Coordinator of Friends of the Earth said "The report is a wake up call about the sea level rise threat, but it may have underestimated the sea level rise problem. Around the world changes in the climate system are breaching worse case scenarios. It is likely sea level rises will be the same. The view that sea level rise may not be more than a metre is assuming no major loss from the Antarctic ice sheet. That is a dangerous assumption given the recent evidence of warming there, and the fragility of many of the ice shelves which are restraining glacier outflow."

Lawson pointed out that research examining the paleoclimate record shows sea level rises of 3 metres in 50 years due to the rapid melting of ice sheets 120,000 years ago. "We need to take off the rose coloured glasses. Our planning for cuts to carbon pollution and dealing with sea level rise should be based on the worst case scenarios, not the best." he said in a media release.

Latest research released by the British Antarctic Survey shows rapid glacial thinning in Greenland and Antarctica. Lead author Dr Hamish Pritchard from British Antarctic Survey (BAS) said “We were surprised to see such a strong pattern of thinning glaciers across such large areas of coastline — it’s widespread and in some cases thinning extends hundreds of kilometres inland. We think that warm ocean currents reaching the coast and melting the glacier front is the most likely cause of faster glacier flow. This kind of ice loss is so poorly understood that it remains the most unpredictable part of future sea level rise.”

Prime Minister Kevin Rudd was reported in the Age as saying "Australia has more to lose through continued inaction on climate change than do our competitor economies," he said. "As we have been warned today by this report ... the real cost for Australia of continued inaction on climate change is deep and enduring and damaging to our economy and damaging to the nation's environment."

Liberal MP Tony Abbott rejected the need for urgent action, saying that no one had even noticed the 20cm rise in sea levels along the NSW coast during the 20th century.

The House of Representatives cross-party Committee released its report on the Inquiry into climate change and environmental impacts on coastal communities on Monday 26 October, making 47 recommendations for action on managing the threat of rising sea level and its impact on coastal infrastructure and environment.

Recommendations include the funding of more research into climate change and sea level rise and its impacts, including:

There was much discussion in the report over how much sea level rise could be expected by 2100. The Intergovernmental Panel on Climate Change (IPCC) estimates that a global rise in sea level of up to 80cm is possible by 2100. However climate scientists point out that more rapid climate change is occurring — anthropogenic emissions of CO2 and sea levels have been rising at or near the upper limit of the envelope of the IPCC projections — and more costly and dangerous impacts are associated with this faster change.

Professor Will Steffen, Executive Director of the Climate Change Institute at the Australian National University (ANU), and Dr John Church, Principal Research Scientist with the Commonwealth Scientific and Industrial Research Organisation (CSIRO) and Leader of the Sea Level Rise Program with the Antarctic Climate and Ecosystems Cooperative Research Centre (ACE CRC) both offered estimates in their submissions. Professor Steffen told the committee "the maximum possible increase in sea-level rise by 2100 is around 2 metres, but only under the most extreme levels of forcing ... A more plausible estimate of total sea-level rise by 2100 is around 0.8 metres. This value lies at the upper end of the IPCC projections. ... Sea-level rise larger than the 0.5-1.0 metre range—perhaps towards 1.5 metres ... — cannot be ruled out."

Sea Levels will continue to rise after 2100 and what efforts we make in reducing emissions now may mitigate the rate of sea level rise next century.

While sea level rises of 20cm or even 50cm doesn't seem like much, but the maximum impact will occur during high tides and storm surges. Professor Steffen used the example of Cairns in North Queensland: "If you look at the mapping done with a storm surge of, say, half a metre of sea-level rise, you get a very large increase in the area that is actually flooded from the same event that you had earlier."

According to the Australian Bureau of Meteorology submission an "analysis of the increase in frequency of extreme events for a rise of ten centimetres in sea levels at 28 locations around Australia shows that Darwin, Brisbane, Sydney and Melbourne will experience four to six times as many as currently observed".

The Federal Climate Change Department has published an assessment in a Factsheet the potential impacts of sea level rise which include:

In May 2009, the Australian Government committed to ‘reduce Australia’s carbon pollution by 25 per cent below 2000 levels by 2020 if the world agrees to an ambitious global deal to stabilise levels of CO2 equivalent at 450 parts per million’.

Is this really enough? Many scientists believe we should aim to stabilise greenhouse gas in the atmosphere at 350ppm to avoid dangerous climate change. So why is the Government aiming at 450ppm, and only if the world agrees to an ambitious global deal?

Prime Minister Kevin Rudd has been asked to play a key role in the Copenhagen Climate Summit with Danish Prime Minister Lars Lokke Rasmussen asking him to serve as a friend to the chair - along with Mexico and the United Nations - in the lead up to the talks in December.

Climate Change Minister Penny Wong is attending a Ministerial Meeting in Barcelona from 29-31 October. “We are just weeks out from Copenhagen and at a critical stage in negotiations,” Senator Wong said. “This is an important opportunity for countries to make progress on key issues central to achieving consensus in Copenhagen.”

The Government's Carbom Pollution Reduction Scheme legislation is currently before the House of Representatives, with the Government pushing strongly for it to be passed prior to the Copenhagen climate talks. The legislation will be debated this week and voted on in the House in the week beginning Monday November 16. It will then be introduced into the Senate immediately after the vote in the House, and voted on in the Senate in the week beginning 23 November. The Labor Government has to negotiate its passage with the coalition parties, the Greens, and independent Senators who are in the majority in the Senate.

Greens Senator Christine Milne said in parliament on Tuesday 27th October 2009 "The government is running up the white flag on Australia's coastline and the 711,000 residences on that coastline. For every metre of sea level rise, you can talk about up to 100 metres of incursion in vulnerable coastal areas. Australians must take notice of the House of Representatives committee report but they must then come back and say to the Prime Minister and to Minister Wong, ‘You cannot look us in the eye and tell us that your targets are in any way going to mitigate this outcome.'"

According to Milne "...if we proceed with the Carbon Pollution Reduction Scheme and a national reduction of emissions target of 5 to 25 per cent, we will lock in a high probability that we will see the worst case scenario in this report actually come to pass. That is the critical thing. There is a massive disconnect between what the science is saying and what the government is saying. It is irresponsible in the extreme for anyone to report that the CPRS or the national target will in any way mitigate climate change or avoid the worst case scenarios." 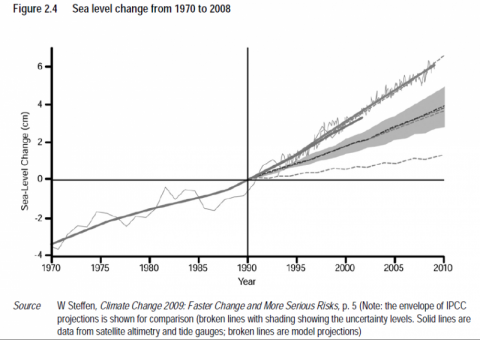 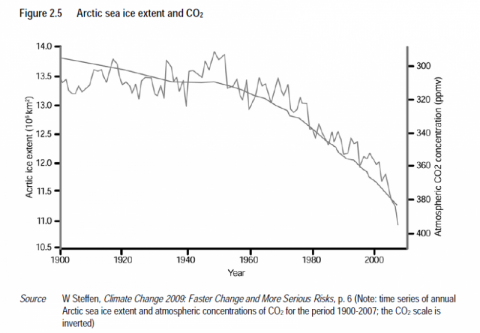 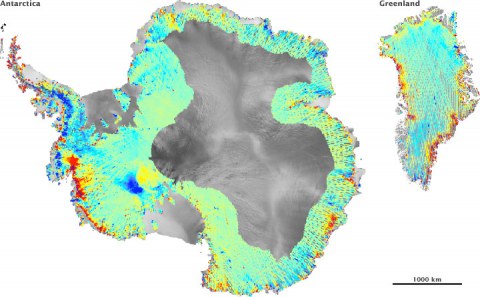