Tuesday evening was supposed to be a rally with 2GB conservative radio shock jock Alan Jones railing against Sydney Lord Mayor Clover Moores plans for expanding cycling infrastructure and the recently completed Bourke Road Cycleway. However, cyclists from Bikesydney organised a counter event at the Sydney Town Hall in support of cycleways which drew up to 300 people. Alan Jones was nowhere to be seen.

Alan Jones has slamed the Bourke Rd cycleway as unsafe and impacting on some local businesses. You can listen to Alan Jones browbeating Clover Moore on 2GB on building cycling infrastructure in May.

Lawyer John Mahony has sent the City of Sydney Council a letter of demand for Council to rip out the cycleway on Bourke Road. The letter was sent as a precursor to litigation by some businesses that claim their turnover has been affected by the new Bourke Road cycleway.

Sydney Council is planning the construction of 55km of separated cycleways as part of a 200km cycling network.

"The reality is we don't have a choice, there is an urgent need for investment in sustainable urban infrastructure as we face the threat of global warming and a world financial crisis. Priority must be given to investing in green infrastructure - projects which will make our urban areas more sustainable and better equipped for the future - while providing health improvements, jobs for our community and benefits for the economy." Lord Mayor Clover Moore MP said in May 2008.

"Developing cycling and walking as viable and attractive ways to get around the city, as real alternatives to driving a car, will help relieve pressure on our congested roads. "More people are switching to bicycles to escape crowded public transport, reduce car usage, do something for the environment and get fit," Ms Moore said.

According to the AECOM cycling report commissioned by the council and released in May 2010 the bicycle network would reduce Sydney's traffic congestion by 4.3 million car trips a year. "What this study has found is that a bicycle network linking Kogarah in the south, with Chatswood in the north and Watsons Bay in the east with Rhodes in the west is economically desirable and viable. We can say with confidence that investment in cycling as a mode of transport will deliver a solid economic return," Ms Moore said.

Photo by GarryW on Sydney Cyclist 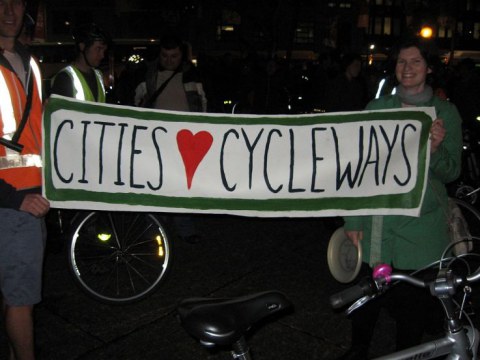 Perhaps Mr Jones could learn from a master

Wonderful! I live in Surry Hills so as you can imagine I'm surrounded by people who hate these cycleways. None of them knew anything about any "anti-cycling rally" and Alan Jones denies organising one so presumably this was all a clever PR stunt for the pro-cycleway cause- congratulations to BIKESydney and Clover's cycleway promotion staff. Brilliant!

If you listen to the audio you will hear Alan Jones pressuring Clover Moore into organising this meeting. When AJ denied doing this perhaps he was unaware he had been recorded?

Who is anti-cycling?! He's talking cycleWAYS not cycLING. And why is he anti-cycleway, because he thinks business should be able to do business. And that is right, it should. But that is not so with the new cycleways, business is going broke. Does Clover honestly think she can get everyone around the city via bike paths?! If I was her and I had to rip up roads for this I'd be putting in LightRail, that way all citizens would benefit, not just cyclists. But all well and good, she doesn't listen to what anyone says and the rest of the council (Or Clover's slaves) don't care for people's livelihoods.

Maybe Jones wasn't at the rally because he couldn't get a park and then got stuck in traffic...