In a protest against carbon trading as a method for acting on climate change, on Friday, July 23 at just before midnight, the public website of the European Climate Exchange (ECX), the leading marketplace for trading CO2 emissions in Europe, was targetted by hacktivists of the autonomous tech collective *decocidio* (#?).

In a public act of digital direct action, the ECX website was taken offline and replaced with a message in an effort to try to raise awareness about carbon trading as a dangerous false solution to the climate crisis, in support of the grassroots activists aiming to oppose the power structures and companies profiteering from the dysfunctional Cap & Trade scheme.

The hacked page shows the embedded video of The Story of Cap and Trade with links to activist groups Earth First, Climate Justice Action, and the Hack Bloc. The purpose of the hack was to expose carbon trading as a scam:

According to the hack message:
"The Cap and Trade system (as implemented in the EU Emissions Trading Scheme) has a whole range of issues:

* It's main purpose is not to reduce emissions, but to help polluters meet "reduction" targets in the cheapest way possible, in a business-as-usual scenario.
* Leaves room for unverifiable manipulation.
* Generates outrageous profits for big industry polluters, investors in fraudulent offset projects, opportunist traders and new 'marketplaces' such as the European Climate Exchange.
* It distracts attention from the wider, systemic changes and collective political action that needs to be taken to tackle climate change and it's fundamental root causes."

In 2009 Friends of the Earth UK released a report warning that carbon trading could trigger a second 'sub-prime' style financial collapse and fail to protect the world from global warming catastrophe. A copy of the full report, 'A Dangerous Obsession', is available at: http://www.foe.co.uk/resource/reports/dangerous_obsession.pdf

You can view the hack at the European Climate Exchange (while it lasts): ECX website: http://www.ecx.eu or at this Mirror of the message at: http://nassibou.atspace.org 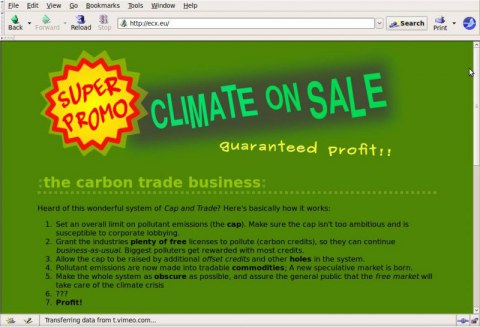 Unfortunately, none of the mainstream media reported the stunt...