Eureka 156th anniversary to be marked in Ballarat

One hundred and fifty six years after the Eureka Rebellion was drowned in a sea of blood in Ballarat on the 3rd December 1854, diverse opinions are still held about the Rebellion's significance. Opinions have varied from Karl Marx's observations in 1855 "we have to distinguish between the riot at Ballarat (near Melbourne) and the general revolutionary movement in the colony of Victoria. The former will have been suppressed by now; the later can only be suppressed through complete concessions". Mark Twain, in 1897 in his whirlwind Australian tour believed "Eureka... is another instance of a victory won by a lost battle." While Robert Menzies in 1946 stated Eureka was "an earnest attempt at democratic government".

The Eureka flag has always played a prominent role in the Trade Union movement. It was flown at the first May Day parade held in Australia at Barcaldine in 1891 and continues to be used as the flag of the more militant elements of the Trade Union movement. Interestingly pockets of the white supremacist movement in Australia have recently adopted the Eureka flag as their flag, while many outlaw motor bikers have used the Eureka flag as their flag for decades. Even Howard's culture warriors got in on the act during his term as Prime Minister downplaying the significance of the Eureka Rebellion describing it as a small business tax revolt the same position that had been advocated by many new left Australian Marxists in the 1960's and 1970's.

Anyone looking for the meaning of the Eureka Rebellion only has to look at the Eureka Oath to understand the ongoing significance to Australians of the Eureka massacre. On the 29th November 1854 nearly 2,000 armed diggers, realising their dispute with the colonial authorities had reached a point of no return, took the Eureka oath at Bakery Hill, Ballarat - "We swear by the Southern Cross to stand truly by each other and fight to defend our rights and liberties".

Those men and women who took part in the Eureka Rebellion believed they were born with inalienable human rights which no government could legislate away. They believed ultimate political authority rested in the hands of the people, not the government of the day, the crown or the state. The mining tax which was originally introduced to stop people leaving their jobs and going to the goldfields to find their fortune soon became a catalyst for a much more important and significant struggle that is as important today as it was in 1854.

The Ballarat Reform League, with the aid of a free and radical press, called a number of mass meetings at Bakery Hill which were attended by over 20,000 miners. The miners and their supporters made decisions and elected delegates with specific mandates to carry out those decisions. Instead of giving a signed blank cheque to a representative every three to four years to make decisions on our behalf as we do in local, state and federal elections, the Ballarat diggers and their supporters made decisions and elected or appointed delegates to carry out those decisions. They used direct democratic methods to ascertain the will of the people.

The diggers in the Eureka Rebellion were split between those who believed they needed to take up arms to press their struggle and those who took a pacifist position. Those who believed Direct Action was needed to pursue and win their claims against a government that had stopped listening and had mobilised its police and military to impose its will by force took the ascendancy in Ballarat in the days leading up to the establishment of the Eureka Stockade.

Faced with overwhelming military force, the diggers understood that solidarity was central to their success. If the diggers did not work together to achieve their aims they knew they had no hope of defeating the colonial authorities. Internationalism played a critical role in the Eureka Rebellion. Men and women from all corners of the globe of all religions, races and nationalities took part in the Eureka Rebellion. Two black men, John Joseph and Afro-American from New York and James Campbell a black man from Kingston Jamaica, were two of the thirteen miners charged with High Treason who were acquitted of all charges in 1855. John Joseph, the first of the thirteen acquitted of High Treason by a Melbourne jury on the 22nd February 1855 was chaired through the streets of Melbourne by a crowd of over 20,000 when he was acquitted.

The Eureka Rebellion although a military disaster marked a significant turning point in Australian history. The colonial authorities, faced with the very real prospect of a revolution in Victoria because of the wide spread community support the Ballarat miners enjoyed in part as a consequence of the massacre that occurred at Eureka as the newly formed Victoria Police force (1853) rioted once the Stockade was over run and slaughtered and maimed participants and witnesses up to a mile from the Stockade, were forced to concede to most of the miners' demands.

Within a year of the revolt Peter Lalor, the elected leader of the armed rebellion and the leader of the "Peace Party" on the goldfields, and John Humffray were elected to the Victorian Legislative Assembly. The reforms which were passed by the Legislative Assembly in the next two decades including free, secular and compulsory education that put Victoria on the cutting edge of reform in the English speaking world were, to a large degree, due to the legacy of the Eureka Rebellion.

One hundred and fifty six years later the central elements of the Eureka Rebellion, Direct Democracy, Direct Action, Solidarity and Internationalism, are once again at the forefront of the struggle for reform and radical change. In an era when there is increasing disillusionment with representative democracy and working up the right channels because parliament in Australia has, to a significant degree, been hijacked by that small section of society that owns the means or production, distribution and exchange, when individual pleas for reform are ignored and Australia is home to a cosmopolitan population that has come to this country from all corners of the globe, Direct Democracy, Direct Action, Solidarity and Internationalism are fast becoming the currency of political, social and cultural change in Australia in the first decade of the 21st century.

RECLAIM THE RADICAL SPIRIT OF THE EUREKA REBELLION

Come along to participate in the activities on the day
http://www.indymedia.org.au/ballarat-eureka-dawn-vigil-and-commemoration... 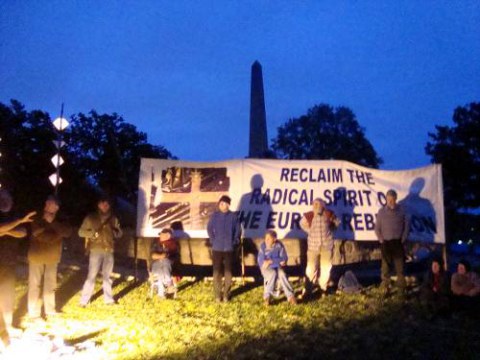 Re Robert Menzies - by George Venturini

"Robert Menzies in 1946 stated Eureka was "an earnest attempt at democratic government"."

Menzies was greatly impressed with much of what he saw when he and his wife toured Nazi Germany in 1938.

After the Munich Agreement of 29 September 1938, which began the dismembering of Czechoslovakia, Menzies returned to Australia. On 6 November 1938 he told a Presbyterian church audience that a government “founded on licence would destroy itself” and went on to call for more “national powers”to help the development of a “national spirit”. A fortnight earlier he had told a Melbourne audience that “There is a good deal of really spiritual quality in the willingness of young Germans to devote themselves to the service and well-being of the State” and that the enthusiasm for service to the State evident in Fascist Italy and Nazi Germany “could be well emulated in Australia”. Writing home he would notice that “it must be said that this modern abandonment by the Germans of individual liberty and of the easy and pleasant things of life has something rather magnificent about it”. Even coming from a man owned and operated by the Bank of New South Wales this was breathtaking! But, inspired by racism? Noooh! But, if the doubt persists, ask the Irish. They well remember what he said of them.
Ten years later Menzies would begin the longest prime ministership in the history of Australia, infused with hatred for the “yellow race” - which was supposed to come down and invade the continent. He poisoned an ignorant and indifferent populace with the disease of the most yobbish anti-communism - which translated into anti-unionism. Because of his own insufficiency he regaled the country with a slavish monarchism - which was expressed in the most servile and demeaning forms.

A lawyer of some fame and a pretentious cultivator of civility - of the “British” style, of course - he told the Australians and the world that apartheid in South Africa was an “internal matter”, therefore should be of no interest to Australia.

Menzies attempted effectively to interfere with the invasion of Egypt to retain the Suez Canal in “the proper hands” - which obviously meant the hands of the Franco-English company.

Before retiring he involved Australian boys in a war in Indochina predicated on a lie - which could never be disproved because the alleged “invitation” was never found.

For mental laziness, emotional dependence and sheer reaction Menzies - the Lord Warden of the Cinque Ports - offered Australians the comfort of living in some kind of kingdom of nothingness. In December 1949 - as Professor Manning Clark wrote - when one was witnessing “one third of the population of the world ... marching forwards, [Australians] choose to stand still”. Clark found it even more depressing that “in December 1975 [at the shafting of the Whitlam redemption, Australians] showed the world that [they] did not mind if someone turned the clock back. We were still a nation of petty-bourgeois property owners, who thought it was prudent to prefer men with the values and skills of receivers to visionaries and reformers to govern our country. We had the values of the counting house; we were interest rate men; we thought quality of life should pull their head in”.