Claim of responsibility for graffiti attack on coal magnate's home

In the early hours of April 9 some Wollongong ecovandals redecorated a $5 million dollar mansion owned by Arun Jagatramka, executive chairman of Gujarat NRE Coking Coal, a mining company which has recently established itself in the Illawarra region.

The company has recently installed over $90 million worth of long wall mining equipment for the massive expansion of Russelvale mine. The recently approved project will not only devastate the local ecosystem but will destroy aboriginal sacred sites and we refuse to sit idly by like 'good' lawful protesters, we will turn our outrage into action.

The slogans we sprayed across the millionaires walls read:

Arun is an international capitalist who values his bank balance more then whatever land he chooses to live on. In attacking his property we wished to send him a signal that neither his money nor the police can protect him from those who love wild nature more than money. We also wished to call bullshit on his claims of total support, “from day one we have received support from all quarters, whether that is the federal government or the state government, the employees, and the community around us.”

Despite government support Gujarat NRE is in a very precarious situation, suffering profit downgrades, project delays, a plummeting share price of more than 80 cents in the past year and contractors owed significant sums of money. With concerted community action targeting the company, there is a very real chance to stop Russelvale mine, as well as the company's 20 other proposed sites in the Illawarra region.

As carbon emissions continue to soar, with institutions such as the annual COP summits failing to provide even an illusion of action against climate catastrophe, it is time those who care about the fate of the earth and the living beings that inhabit it to take a stand against the machinery and individuals which are polluting our common landbase.

Although we didn´t take any photos of our slogans, local media covered the small action for 3 days running, even releasing CCTV footage of two individuals, with requests for potential snitches to aid police in the investigation.

Unsurprisingly the act was condemned by “Lock the Gate” a bourgeois farmers association defending their class interests against the cruder nouveux riche of the mineral exploitation industry. Spokesman Drew Hutton described the nonviolent property damage as “completely inconsistent” with a commitment to non-violence. The Stalinist sect 'Socialist Alliance' even jumped on the reactionary bandwagon by condemning the action on public radio.

Australia is one of the world’s largest coal exporters and the industry represents the nation’s most powerful business lobby. As long as we remain trapped in a system ruled by police, political parties and corporate capital we will have no faith in any reforms toward an ecologically sustainable future. Those who consider themselves environmentalists must move beyond the ineffectual protests and lobbying campaigns of mainstream environmental groups to direct acts of sabotage against the industrial tools of devastation.

AGAINST COPS, CAPITALISTS AND COAL MINES 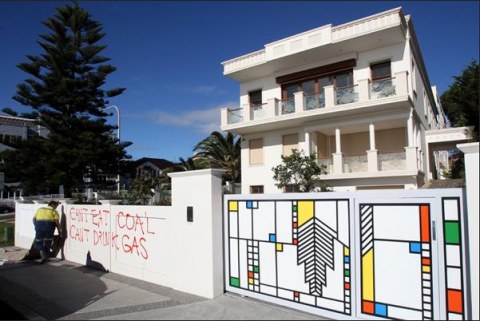 This is all very good, really.

But why call him an 'international capitalist'? Does it matter that he's not a national (Australian?) capitalist? This isn't nitpicking. Nationalist/racist responses to capitalism and environmental destruction are reactionary and dangerous to all of us who want global liberation, and it worries me to see communiques from vandals that might be playing into this.

Hm, I always took terms like 'international capitalist' to mean that their class status transcends borders. That nationality is not important. I guess it's in how you read it.

Could be read as a nod towards a nationalist interpretation

That's how I would have read it if the article was about an Australian-born capitalist. Given that it's about someone from India, it just seems that it could be read as a nod towards a nationalist interpretation. I'm not saying that's how it was meant, just that those possibilities are there and we should be wary of them.

I am a journalist at the Illawarra Mercury and would like to speak to the person who wrote this article. Could you please get back to me via bshields@illawarramercury.com.au