Victorian Environment groups gathered to protest the Environment and climate actions of the Baillieu Victorian State Government on Sunday November 13, 2011 on the steps of State Parliament. To highlight the direction the Government is taking Victoria's environment, the protesters marched backwards to the Treasury Gardens.

Several hundred people gathered outside Parliament House to highlight the direction the Baillieu Government is taking Victoria on the environment and climate change.

Organisers of the Backwards March – Environment Victoria, The Wilderness Society, Victorian National Parks Association and Friends of the Earth – called on the Premier to change direction to save Victoria’s environment before it’s too late. The protest comes a fortnight ahead of the Baillieu Government’s first anniversary.

Reasons for the march include in the 1st year of power the Government:

All without a substantial electoral mandate to undertake these actions. The coalition Government did not present an Environment or Climate Policy at the last election.

Environment Victoria’s CEO Kelly O’Shanassy said: "The Baillieu Government didn’t release their environment policy ahead of the election, and since they were elected we’ve seen the systematic dismantling of Victoria’s environmental protections. Its extremely disappointing and contrary to Victorians aspirations for the environment. We need to see a change of direction urgently."

"Some of the Baillieu Government’s decisions are frankly illogical and ideological," Friends of the Earth’s Campaigns Coordinator Cam Walker said. "The State Government has so far turned its back on the solar and wind industries, two of the fastest growing industries in the world, and instead is supporting new coal mines and coal-fired power stations. Victorians can oppose wind farms but not the extension of a coal mine. It’s a backwards approach that needs to change."

The Wilderness Society’s Forests Campaigner Luke Chamberlain said: "It has only taken a year for Premier Baillieu to take Victoria back to Victorian times when loggers and miners were able to destroy our beautiful natural environment without any recourse. Recent revelations that forestry could be made exempt from the Flora and Fauna Guarantee Act effectively sign the death warrant of Victoria’s iconic Leadbeater’s possum at Sylvia Creek and the Long-footed potoroo and other endangered species at Brown Mountain."

Running report cards on the Baillieu Government’s negative and positive decisions on the environment can be found at these locations:
Environment Victoria Reportcard
FoE Reportcard 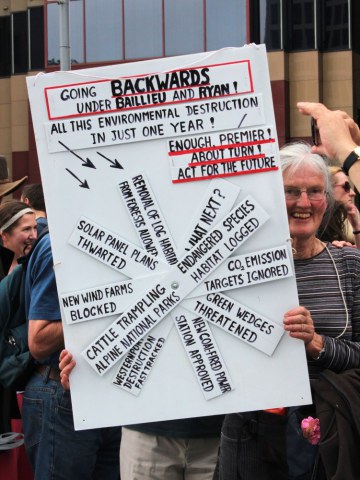 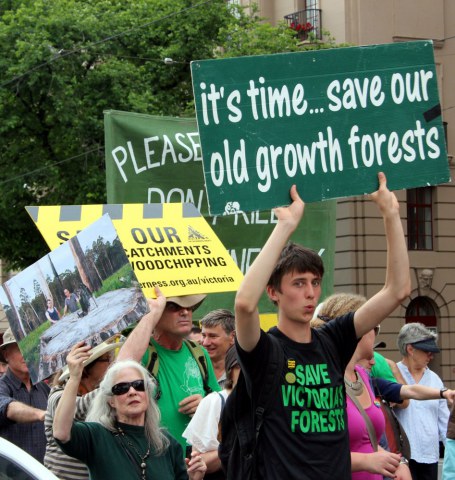 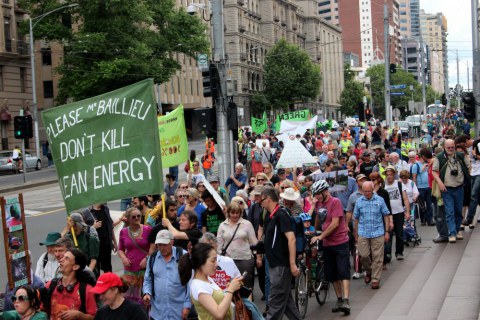 Brief video of the march on YouTube - http://youtu.be/C_WMA_mSvg4 - and more on the speakers on Melbourne Protests - http://melbourneprotests.wordpress.com/2011/11/15/going-backwards-under-...

Nitwits still have blood on their hands from black Saturday

"Opening up redgum parks for firewood collection".Good on Ya Ted the collection of firewood will reduce the fuel for bush fires this year, the nitwits from the Victorian National Parks Association still have blood on their hands from black Saturday and they still want to leave fuel in the bush for this Summer where is their brains?

Actually an analysis of the Black Saturday 2009 fires and land use found the most intense firestorms were on agricultural land, plantations and forestry regrowth areas. Oldgrowth forests actually inhibited or reduced the intensity of bushfires passing through an area.

Watch a video presentation by Chris Taylor from Melbourne University on this subject - Intact native Forests mitigate bushfire in a warming climate.