Newcastle, Sun Mar 28, 2010: Climate activists from Rising Tide blocked entry to the world's largest coal port on Newcastle Harbour, north of Sydney. The 'People's Blockade of the World's Biggest Coal Port' put together a motley protest fleet of 60 rafts, kayaks and boats including a 70 foot yacht. Over 350 people attended the protest according to Greens MLC Lee Rhiannon. Carbon dioxide emissions from coal is a major contributor of climate change. Photos on Flickr | More photos

Protest spokesperson Naomi Hodgson told ABC News that "In an era of dangerous climate change we just cannot watch this massive expansion go on and not do anything about it," she said. "We're not willing to accept the massive expansion of the coal industry in New South Wales and coal is Australia's major contributor to climate change and it's also the fastest growing."

No ships entered the port today with NSW Port Authority altering it's shipping schedule to avoid confrontation with protesters. "Last year and this, they have totally cancelled their ships in advance, when we announced that we were holding a protest, so we feel that we are getting our message through, that climate change is a big issue of concern for the community, and we can't accept the massive expansion of the coal industry," said Ms Hodgson reported by AAP.

“Ordinarily, there would have been at least four or five coal ships move in or out of Newcastle Harbour today, but instead there were none." said Ms Hodgson “This an amazing demonstration of the power of peaceful mass action by the community. Hundreds of people united to protest the rapid expansion of the Australian export coal industry – this country's number one cause of climate change.”

“We succeeded in not only shutting down the harbour, but in showing the political leaders in this country exactly what true leadership on climate change looks like. If Australia is serious about climate change, we will put an urgent stop to the expansion of coal, and begin replacing this devastating industry with safe and renewable alternatives.” concluded Ms Hodgson. “Coal exports are the number one cause of climate change in Australia. The coal we export from NSW and Queensland already accounts for more greenhouse pollution that all onshore sources combined.”

The protest comes the morning after the global earth hour event which involved hundreds of millions of people in a symbolic calling for action on climate change. The Blockade is the fifth annual blockade of the Coal port. Police had several vessels on the harbour to stop protest craft blocking or entering the shipping channel to the port, but they were really superfluous given the Port Change of schedule.

The opening of a third coal port terminal last week was disrupted by 4 climate protesters. Newcastle currently exports around 90 million tonnes of coal per annum (Mtpa), making it the world's biggest coal port. The industry is dominated by transnational mining corporations BHP-Billiton, Xstrata, and Rio Tinto. Newcastle coal exports are expected to more than doubled to 211 Mtpa capacity with the current export expansions implemented. Planning is now underway for a fourth Newcastle coal terminal to take exports to more than 300Mtpa. 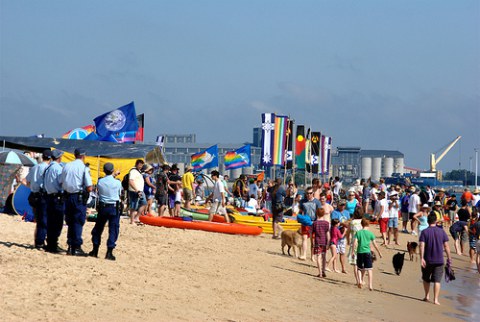 Once again Rising Tide are claiming success in disrupting shipping movements through the port (as they claimed last year) when none were planned. The statement from Naomi Hodgson that shipping movements were cancelled in advance is completely false. Seems to just be a statement that was made to help the protestors feel better about not achieving anything.

The fact is that all coal berths were occupied yesterday with the exception of D4 at Carrington which had been out of action all week due to scheduled maintenance being undertaken. The D4 berth became available for coal loading again last night and a vessel was berthed there at 9pm.

At the other four available loading berths, coal loading was taking place the entire time the protest was being staged. Two vessels actually entered the port for loading, as scheduled, only hours before the protest commenced.

A successful protest would have seen either: 1) coal berths unoccupied; or 2) loading idle time being experienced on vessels already at the berth where loading had completed with the vessel unable to leave due to the blockade. Neither of these occurred.

Also, not sure how "symbolic" earth hour was on Saturday night - energy consumption in the Hunter actually increased compared to average at that time. Maybe all the scaremongering is starting to wear a bit thin with the general public.

next it will be the coal mines to stop the spread of cancer.coal 21 poisonous chemicals 9 of which are cancer causing...think about it.

I agree. This protest achieved nothing except for mild cases of sun burn.

The left shouldnt kid itself if it wants to change things.