With the guidance of medical experts, the following explains how prisoners are executed in the USA.

There are four other methods of executions on the books in several U.S. states that still execute prisoners, used either by prisoner's choice or when drugs needed for lethal injection are unavailable. Drugs used for lethal injection in the U.S. are dying-up for a variety of reasons. Death penalty abolitionists and many medical groups have decried the medicalization of capital punishment — that is, using medical healing tools to legally kill people via lethal injection.

In 2010, the United Kingdom banned its export, and the European Union soon followed suit. The European manufacturer of pentobarbital, a drug substituted for thiopental, has refused to sell it to American corrections officials for executions. Since then, U.S. states efforts to find suitable replacement drugs look like they could have come straight out of horrror movies.

The U.S. executed 35 people in 2014, all by lethal injection.  The U.S. (the land that preaches human rights to the rest of the world) ranks fifth top executioner in the world behind China, Iran, Saudi Arabia and Iraq. “It’s devastating to have the United States [be] the only Western developed country that executes people and the only country in the Americas to do so,” Ivan Simonovic, the United Nation’s assistant secretary-general for human rights says.

Still, the death penalty has supporters in the U.S., especially among some victim’s rights groups, whose members back the death penalty as a form of restorative justice. Detractors, however, say its application is unconstitutional.

According to the Death Penalty Information Center, the U.S. has executed 1,408 people since 1976, when the death penalty was reinstated after it was suspended in 1972 because of a landmark Supreme Court case, Furman v. Georgia. The petitioners in the case claimed that the implementation of the death penalty was cruel and unusual and violated the Eighth and Fourteenth amendments. They showed that only 15 to 20 percent of those who committed crimes eligible for the death penalty were sentenced to death. In other words, the fact that some would be put to death and some would not for committing identical crimes, constituted a random, cruel and unconstitutional system.

In 1976, 35 states reinstated the death penalty, restricting juries’ discretion in imposing the sentence. As of the start of 2015, there were 3,109 prisoners on death row in the U.S. If they lose their legal appeals or do not die of other means (including suicide) while incarcerated, they will likely be put to death by one of several methods. While it’s impossible to ask a corpse what it felt like to die in any particular manner, clinically speaking the following is what happens to a human body when it is killed via the legal methods in the U.S.

Medical experts are not permitted by law to assist in legalized executions. Hence, the result of many 'botched' executions that have taken place.

Authorized in 31 U.S. states, as well as by the U.S. military and the U.S. federal government. Two methods, typically, one - or three-drug protocol. Lethal injections are administered via intravenous tube, not syringe.

First drug ... Pentobarbital or midazolam, a sedative and an anesthetic. It is intended to render the inmate unconscious, unarousable even by extreme pain (e.g., surgery). Administered in the high doses used — as much as 20 times the therapeutic dose — this drug alone will stop breathing and collapse the circulatory system, putting an inmate to death within 10 minutes. This is the drug that is currently in short supply in the U.S.

Second drug ... Pancuronium bromide (or other drugs in the -uronium family), a paralytic. It gives the inmate a placid appearance, paralyzing almost all muscles (except the heart).

Third drug ... Potassium chloride, which stops the inmate’s heart. (It is used in low doses to treat potassium deficiency.)

How it’s supposed to work ... In the one-drug protocol, if administered properly, the prisoner is injected (via IV) with enough of a sedative to cause death by overdose, knocking him/her out within minutes, depending on the prisoner's’s blood circulation and heart rate. The other drugs are not required.

In the three-drug protocol, the first drug, if administered property, renders the prisoner unconscious. After several minutes, during which a rigorous depth-of-anesthetic test determines whether the prisoner is fully unconscious, the second and third drugs are administered within minutes of each other.

The prisoner should be dead within about 10 minutes. But sometimes things do go terribly wrong!

What can go wrong ... There are dozens of cases in which prisoners were subjected to prolonged suffering, painful and bloody process of inserting the IV needle. In other cases, the first drug was not injected properly, resulting in the anesthetic being delivered into soft tissue rather than the circulatory system, rendering it ineffective. If the sedative is not properly administered, the prisoner is still conscious but paralyzed, and suffocates slowly from the second drug.

Example of botched case ... Clayton Lockett, April 29, 2014, Oklahoma: It took 51 minutes for the paramedic and physician to place the IV for the first drug, the sedative. The insertion of the IV proved problematic, and it was ultimately inserted into a vein in Lockett’s groin. He writhed, moaned, and breathed heavily after the other drugs were administered. He remained paralyzed and awake, effectively locked in his own body, suffocating for several minutes before his heart finally stopped. It took him 43 minutes to die.

In July 2014, Arizona experimented with drugs to execute Joseph Wood  —  a drug cocktail that included the painkiller, hydromorphone. Executioners had to inject Wood 15 times —  a total of 750 milligrams of midazolam over the course of two hours, during which he moved around and gasped for air before he finally died.

How it’s supposed to work ... A strong electrical current from the head to a leg through the heart causes ventricular fibrillation, a cardiac rhythm disturbance. The heart quivers and stops pumping blood to the brain, rendering an inmate unconscious within approximately 30 seconds. The prisoner may be declared dead within three to five minutes. But sometimes things do go terribly wrong!

What can go wrong ... Brine-soaked sponges are used to conduct the current between electrodes and the prisoner’s skin. If the sponges, typically placed on the head, are over or undersoaked, they can either cause a short circuit or resist the current. Ventricular fibrillation (which is, on its own, is excruciatingly painful) is not always reliably achieved, since the electric current could pass around the heart, requiring additional jolts of electricity to bring about death. Loss of control over bodily functions usually occurs — vomiting, urination and defecation. Exposure to additional shocks can have gruesome consequences, including combustion, cooked organs (while the prisoner is still conscious), burst eyeballs and split skin due to the extremely high temperatures.

Example of botched case ... Allen Lee Davis, March 25, 1999, Florida: Media reports and witnesses indicated that Davis bled profusely from his nose or mouth, with burns on his leg, groin and head. Before he was pronounced dead, the blood from his mouth had poured onto the collar of his white shirt and the blood on his chest had spread to about the size of a dinner plate, even oozing through the buckle holes on the leather chest strap holding him to the electric chair. Davis cried-out twice before he died. He was electrocuted for two minutes and was declared dead eight minutes later.

The prisoner is strapped down with a target pinned over his or her heart. Five riflemen fire, with one firing a blank, allegedly so no one knows with certainty who is responsible for the of the killing the prisoner. By the time the prisoner hears gunfire, the bullets have already hit his/her heart. The prisoner 'probably' feels something like a punch in the chest before losing consciousness a few seconds later.

How it’s supposed to work ... The high-caliber bullets rip open the heart, blood vessells and the lungs, cutting off blood to the brain. The prisoner loses consciousness from blood loss, although it’s unclear exactly how many minutes it takes the prisoner to die. But sometimes things do go terribly wrong!

What could go wrong ... One or more shooters can intentionally or unintentionally miss the target, or their firearm can malfunction, potentially leading to a long painful death caused by blood loss.

Example of botched case ... Eliseo J. Mares, Jan. 10, 1951, Utah: Two of the four bullets fired missed. One hit him in the abdomen, the other in the hip. It took several minutes before he was declared dead, with a witness telling the media years later, that heMares died “silently and horribly.”

The prisoner is trapped to a chair in an air-tight chamber. Under the chair is a bucket of sulfuric acid, into which sodium cyanide crystals are dropped via a switch outside the chamber, producing hydrogen cyanide, a poisonous gas. Oklahoma has approved a new protocol using only nitrogen gas, which is odorless, allegedly resulting in hypoxia and a loss of consciousness. (It is the first state to do so and has not yet executed anyone using this method.)

How it’s supposed to work ... Once inhaled, the toxic gas destroys the mitochondria, tiny structures in cells that generate energy. Hydrogen cyanide inhibits this process, resulting in cardiac arrest and death. But sometimes things do go terribly wrong!

What could go wrong ... Much depends on how rapidly a prisoner is breathing and if the correct preparation of the gas is used. A prisoner might breathe shallowly or hold his/her breath, resulting in a slower death, the loss of bodily functions and body spasms.

Example of botched case ... Donald Eugene Harding, April 6, 1992, Arizona: It is unclear what went wrong, but he gasped and thrashed his body around for nearly 11 minutes before he died. Harding's  execution described as so 'gruesome' that it prompted Arizona to change its primary method of execution to lethal injection for all prisoners sentenced to death after November 1992.

Authorized in U.S. states of New Hampshire (if lethal injection drugs are not available), Washington (by prisoner’s choice) and Delaware (where it remains on the books, but the gallows have long been dismantled).

A noose is tied around the prisoner’s neck, and he/she is dropped from an appropriate height for his or her weight.

How it’s supposed to work ... The noose occludes the carotid arteries, blocking blood flow to the brain, resulting in loss of consciousness. In addition, the noose is supposed to break the prisoner's spinal cord at the second cervical vertebra, which also results in a loss of consciousness. Death due to strangulation can take much longer. But sometimes things do go terribly wrong!

What could go wrong ... Hanging is far more complicated than it looks. The prisoners’s weight must be factored in to determine the height from which he/she is dropped. Prisoners with more muscular necks or lower body mass can pose complications. If the calculations are not correct or miscalculated, the prisoner can suffocate slowly, spinal cord intact and totally conscious, or the noose can decapitate him/her.

Example of a botched case ... Raymond Lisenba, May 1, 1942, California: He was the last man to be hanged in the U.S. state of California. The rope used to hang Lisenba was the wrong length. It took him about 13 minutes to die. Local media at the time deemed Warden Clinton Duffy’s description of Lisenba’s hanging 'too graphic' to report, but some of the media published Duffy’s comment: “Maybe it would help if you could publish what I said. It would do the people good to know exactly how their mandate was carried out, I have nothing more to say except that this was the most terrible experience of my life and I pray to God that I shall never have to repeat it.” Warden Duffy witnessed 90 executions in the course of his career at San Quentin Prison. 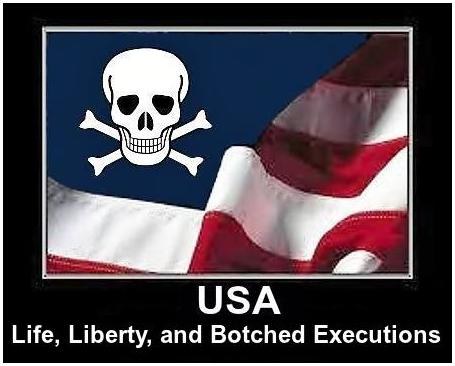