Welcome to the new normal with stinking hot summers, as heatwaves hover over and amplify the urban heat island effect in cities like Melbourne bringing the heat from central Australia. Most of Victoria is feeling the heat, which has come despite ENSO being in a neutral phase. So far the State Government lead by Premier Denis Napthine has made only Token efforts in managing heatwaves despite predictions by climate scientists that heatwaves increasing faster than average temperatures and becoming more frequent and intense. At least my local council, the City of Moreland is taking heatwaves seriously investigating what it can do and calling for greater heatwave emergency planning by the state government.

2014 started with intense heatwave in central Australia and Queensland with temperatures climbing toward 50C. It was so hot that bats were dying and falling from the trees. The extreme heat took a little whole longer to make it to the south east and Melbourne, but arrive it did causing stress to the electricity grid in Victoria and showing the importance of renewables, both solar PV and wind for moderating peak demand. Melbourne had four consecutive days of temperatures exceeding 41C, a new record for the city.

The heatwaves have continued in late January showing more action required on climate change and adaptation.

More deaths from heatwaves than any other natural disaster

Preliminary statistics from the first January heatwave are already being reported. Victorian Ambulance Service had a 700 per cent rise in number of call-outs for cardiac arrests when temperatures spiked at almost 44C during the heatwave. About 203 deaths were reported to the coroner, more than twice the average. Paramedics treated more than 500 people for heat exhaustion, and about 60 kids had to be rescued from locked cars, reported the ABC.

The 2009 Black Saturday bushfires killed 173 people. But the heatwave associated with the bushfires also proved fatal to those at risk of heat fatigue: children and the elderly. A report - January 2009 Heatwave in Victoria: an Assessment of Health Impacts (PDF) - found that:

There were 374 excess deaths over what would be expected: a 62% increase in total all-cause mortality. The total number of deaths was 980, compared to a mean of 606 for the previous 5 years. The greatest number of deaths occurred in those 75 years or older, representing a 64% increase; 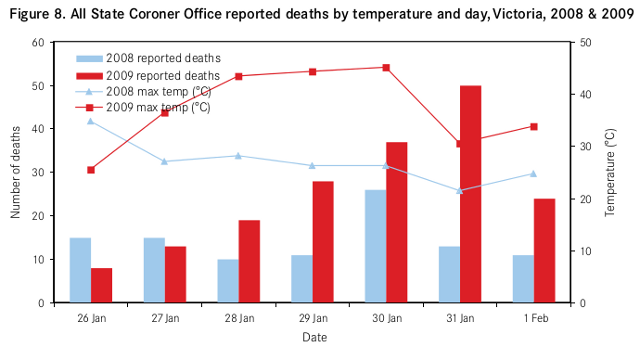 Although older people are the primary risk category, it would be wrong to assume that extreme heat just hastens most deaths by a few months. Loughnan etal (2013) in A spatial vulnerability analysis of urban populations during extreme heat events in Australian capital cities, state categorically "Only a small proportion of deaths in heatwaves represent forward displacement of the deaths of people expected to die in the short term. Heatwave deaths are largely avoidable."

The Sydney Morning Herald reported in July 2013 that heat related deaths are likely to quadruple by 2050. There were more than 400 deaths in Melbourne and Adelaide alone from the 2009 heatwave, and similar number of fatalities from the 1939 and 1895 heatwaves. The report was based on the State of Australian cities 2013 report that projected that there will be more than 2000 heat-related fatalities in 2050 compared with about 500 recorded in 2011. Brisbane and Perth in particular are likely to have greater numbers of heat related deaths than other cities. 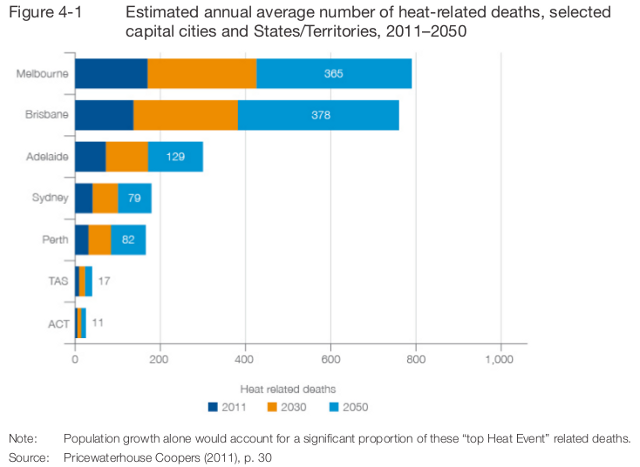 Heat stress is a silent killer, affecting the elderly and small children disproportionately. Homeless people are particularly vulnerable due to their circumstances, but also people on low income who live in rental accommodation with insufficient cooling and building insulation.

Victorian Council of Social Services released a report in March 2013 called Feeling the Heat: Heat waves and social vulnerability in Victoria. This report (executive summary) identified that the Victorian government has done little development in this area since the Victorian Heatwave Plan (PDF) and heat alert system were released after the 2009 heatwaves that saw the devastating Black Saturday bushfires. VCOSS has identified that better planning is needed to meet challenge of heatwaves.

Since 2010 there has been very limited further investment in preparing for heatwaves. There are also concerns that significant numbers of Victorians, many of them disadvantaged and socially isolated, continue to be at risk from extreme heat.

This is a growing concern. Some of the issues and stories raised by the VCOSS report include: 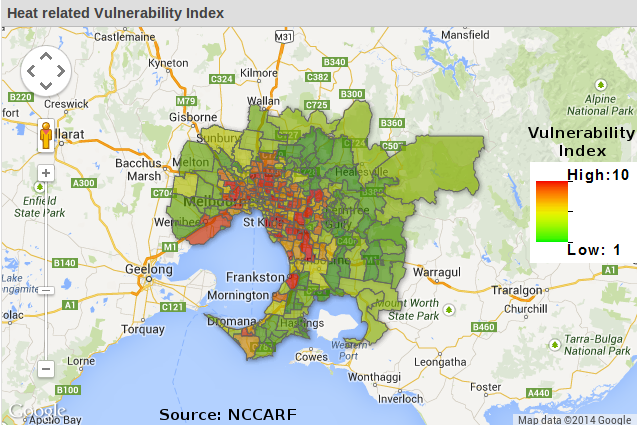 Caption: The spatial distribution of heat related vulnerability in the Melbourne greater metropolitan area suggests that areas of higher risk are concentrated in the western and south-eastern regions. These are areas with a higher concentration of aged persons and households where English is not the primary language. Source: Mapping Heatwave Vulnerability produced by National Climate Change Adaptation Research Facility (NCCARF)

VCOSS recommended a series of actions to address the public health issues associated with heatwaves and their impact especially on those most vulnerable:

Moreland Council is located in Melbourne's inner northern suburbs. It is a progressive council with a long history of working for all it's citizens. It has engaged in an active energy efficiency program for it's own activities and sponsors the Moreland Energy Foundation Positive Charge program for residents to also reduce energy. Last year it achieved carbon neutrality for all it's activities, with the purchase of carbon offsets from an accredited scheme in India. 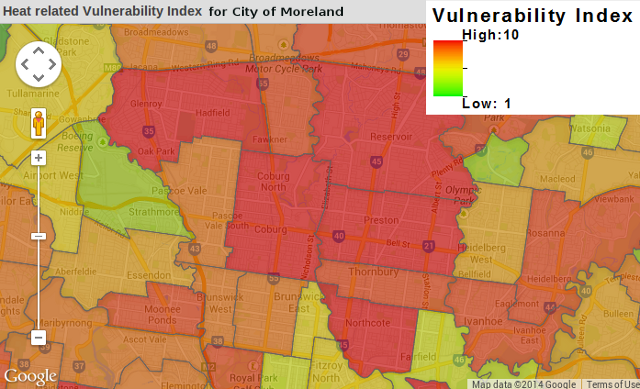 Caption: The spatial distribution of heat related vulnerability in Melbourne northern suburbs focussed on the City of Moreland. There is high vulnerability in the suburbs of Coburg, Hadfield and Glenroy probably reflecting population demographics of a higher proportion of older people. Fawkner is slightly less, with Brunswick and Pascoe Vale with medium vulnerability. Brunswick East near Merri creek has the lowest vulnerability in Moreland. Source: Mapping Heatwave Vulnerability produced by National Climate Change Adaptation Research Facility (NCCARF)

The impact of Heatwaves has been raised by Climate Action Moreland members with Moreland City Councillor Sue Bolton, who subsequently asked that the Council make proper plans to protect the people of Moreland. At the Council meeting on 12 February 2014 Cr Bolton put a motion to the Council, which was passed unanimously.

The motion had 3 parts:

Here are the details of the resolution: 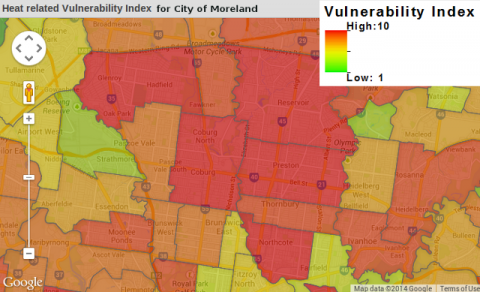