Professor Ove Hoegh-Guldberg takes us through and explains a controlled experiment his Institute is conducting in coral reef ecosystem reaction to various temperature and carbon dioxide environments. He argues that Coral Reef ecosystems have already changed significantly from pre-industrial times, and will change even further as human carbon emissions increase in the atmosphere with many species likely to be pushed to extinction due to heat stress and ocean acidification from anthropogenic climate change.

Hoegh-Guldberg is Director of the Global Change Institute at the University of Queensland and an important authority on tropical marine biology, coral reef ecosystems and climate change. 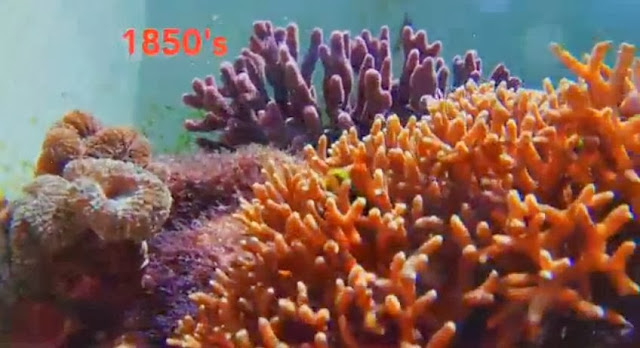 2013: Sea Temperature and CO2 content from the present (2013) with atmospheric CO2 about 380ppm and water temperatures 1C warmer than 1850s. Higher algal growth: 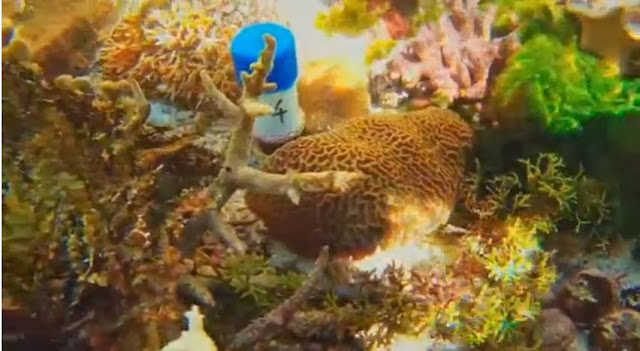 2050 Best Case: Sea Temperature and CO2 content best case with climate mitigation to keep CO2 to 450ppm, with ocean sea temperature another degree warmer than the present. "Most corals have died, and those that have remained don't have zooxanthellae". 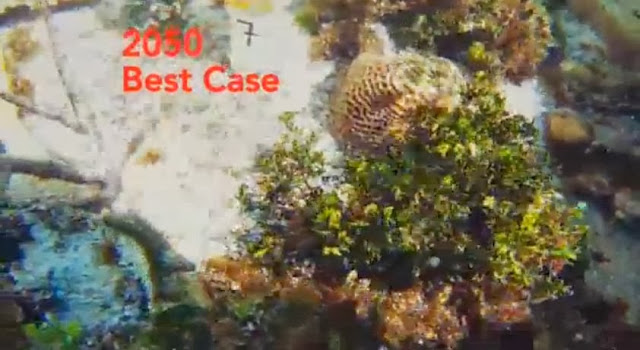 2050 Worst case: Sea Temperature and CO2 content worst case (business as usual) for 2050. "A single coral species that seems to have come through, but it is completely bleached and looking very sick. A few sea anenomes and even those are struggling and some of those are bleached." 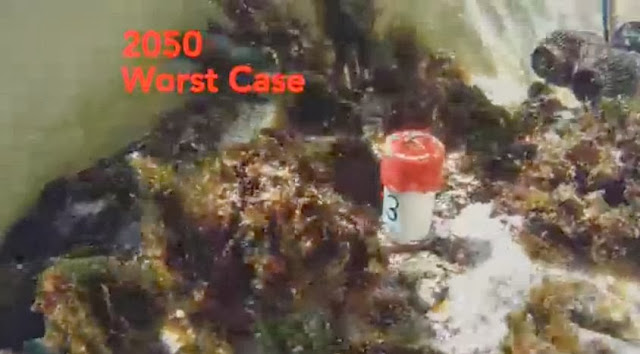 "This is the stark reminder, the experimental evidence, not theory, not spin but the hard evidence of what those high CO2 and temperatures will do to the world's most biologically diverse ecosystem." he concludes in this video, published on youtube on 19 November 2013.

Hoegh-Guldberg attended the Copenhagen climate talks and in a side presentation warned negotiators about what would happen to coral reef ecosystems if rapid and substantial mitigation wasn't agreed upon and undertaken:

"Carbon and coral reef ecosystems are not sustainable at temperatures that increase up to 2 degrees above the pre-industrial or concentrations of CO2 above 450ppm." he told the audience of climate negotiators and others.

In a 2012 Nature Climate Change article (Frieler et al 2012) which Hoegh-Guldberg contributed to - Limiting global warming to 2 °C is unlikely to save most coral reefs, the study concludes:

Despite the inclusion of optimistic scenarios concerning rates of evolutionary adaptation, our results confirm that coral reef ecosystems face considerable challenges under even an ambitious mitigation scenario that constrains global warming to 1.5 °C above pre-industrial temperatures. Our projections suggest that most coral reefs will experience extensive degradation over the next few decades given the present behaviour of corals to thermal stress.

To protect at least 50% of the coral reef cells, global mean temperature change would have to be limited to 1.2 °C (1.1-1.4 °C), especially given the lack of evidence that corals can evolve significantly on decadal timescales and under continually escalating thermal stress. There is little doubt from our analysis that coral reefs will no longer be prominent within coastal ecosystems if global average temperatures exceed 2 °C above the pre-industrial period.

In the real world there are places with CO2 seeps from the bedrock, associated with nearby volcanic islands. These can also give us an idea of what the future may hold for coral reefs in warmer seas with greater dissolved carbon dioxide.

Research conducted at a natural carbon dioxide seep in Milne Bay, Papua New Guinea provides us with a real world example of ecosystems in a high carbon dioxide environment with just limited sea surface warming of about 0.5C that we experience today.

Here is an Australian Institute of Marine Science video from 2011 of corals in Milne Bay, Papua New Guinea.

The Intergovernmental Panel on Climate Change (IPCC) forecasts atmospheric CO2 levels of about 750ppm or more by 2100. This will result in a change of pH level from 8.1 to 7.8 - more acidic - which will effect corals and carbonate shelled creatures.

"In the past, we have relied on short-term laboratory experiments to tell us what happens to marine organisms exposed to ocean acidification," Dr Fabricius said in a 2011 media release. "Those experiments indicated deleterious effects on the performance of many species."

"Our research showed us there will be some winners, but many more losers, when tropical coral reefs are exposed to ocean acidification," she said.

"We found that as pH decreases the number and types of corals making up coral reefs are much reduced. Diversity of corals drops by 40 per cent, and the reef becomes dominated by one form of corals, massive Porites.

"The cover of the more delicate tabulate, foliose and branching corals was reduced three-fold near the CO2 seeps. Similarly, the abundance of soft corals and sponges were also significantly reduced. Most importantly we found that reef development ceased below pH level 7.7."

One of the other AIMS co-authors, Dr Janice Lough said: "The study has shown that massive Porites corals are able to tolerate relatively high levels of CO2. However, their growth rates were 30% lower than expected, both at the seep sites and at the surrounding reefs. We attribute this slow growth to recurring heat stress, with nine of the last 12 years having experienced extremely high seawater temperatures".

Amongst the few winners at higher levels of CO2 were seagrasses which showed increased cover with three to four times more shoots and roots than under normal conditions, according to the study. Seagrass meadows are efficient blue crabon sinks for sequestering carbon in seabeds, but are dependent upon adequate light and minimal pollution.

"Ultimately, what we observed was that the diversity of reefs progressively declines with increasing CO2. At concentrations similar to those predicted for the end of this century at a ‘business as usual' emissions scenario, the "coral reef" observed was depauperate and lacked the structural complexity of present healthy tropical coral reefs. These changes are simply due to ocean acidification, i.e., even without the projected +2°C warming of the oceans associated with rising greenhouse gases. The 0.5° warming we have already observed in the tropics in the last 50 years has already caused mass coral bleaching events and declining coral calcification."

The study abstract reads in full, with my emphasis to the concluding statement:

Experiments have shown that ocean acidification due to rising atmospheric carbon dioxide concentrations has deleterious effects on the performance of many marine organisms. However, few empirical or modelling studies have addressed the long-term consequences of ocean acidification for marine ecosystems. Here we show that as pH declines from 8.1 to 7.8 (the change expected if atmospheric carbon dioxide concentrations increase from 390 to 750 ppm, consistent with some scenarios for the end of this century) some organisms benefit, but many more lose out. We investigated coral reefs, seagrasses and sediments that are acclimatized to low pH at three cool and shallow volcanic carbon dioxide seeps in Papua New Guinea. At reduced pH, we observed reductions in coral diversity, recruitment and abundances of structurally complex framework builders, and shifts in competitive interactions between taxa. However, coral cover remained constant between pH 8.1 and ~7.8, because massive Porites corals established dominance over structural corals, despite low rates of calcification. Reef development ceased below pH 7.7. Our empirical data from this unique field setting confirm model predictions that ocean acidification, together with temperature stress, will probably lead to severely reduced diversity, structural complexity and resilience of Indo-Pacific coral reefs within this century.

Dr Fabricius said: "The rate of increase of atmospheric CO2 continues to accelerate due to human activities. The range of exposures at the Milne Bay seep sites are comparable to end-of-century CO2 projections. It would be catastrophic if pH levels dropped below 7.8. This study proves we must urgently transition to a low CO2 emissions future or we face the risk of profound losses of coral ecosystems."

Are our politicians listening to this threat? The glacial pace of international negotiations and the low rate of unilateral action by nearly all countries would have us believe otherwise. In fact, it is vulnerable countries such as small island nations like Tokelau and the Maldives who are most aware of what is at stake and consistently speak out in support of marine scientists for a lower Global Emissions target.