Professor David Karoly and Post-doctoral researcher Sophie lewis have been undertaking analysis on the temperature record for Australia in 2013. Their article published at The Conversation - Australia’s hottest year was no freak event: humans caused it - is an attribution of risk study of the extreme Australian heat in 2013 involving statistical probability analysis. This is cutting edge climate science research using Global Climate modelling, simulations and probability analysis to determine likely cause.

Last year Lewis and Karoly examined the temperatures for the 2012-2013 Australian summer using Fractional Attribution of Risk (FAR) analysis, publishing a study - Anthropogenic contributions to Australia's record summer temperatures of 2013 (open access) - that "found that it was very likely (with 90% confidence) that human influences increased the odds of extreme summers such as 2012-13 by at least five times."

Fractional Attribution of Risk (FAR) methodologies were originally developed in epidemiology, health and population studies, and over the last few years have been applied to extreme weather events to determine the statistical likelihood of these events being substantially caused or contributed to by human caused greenhouse gas emissions and climate change. You can read background on Why bother trying to attribute extreme events? at the Real climate Blog.

Ten years ago you could say that "No single extreme weather event can be attributed to climate change", but that is no longer true today. Off course such analysis is mostly dependent on the availability of accurate historical records to use as a baseline for computer modelling and simulations. Attribution of a single event is still difficult and complex. Large scale events based on temperature and rainfall are more likely to be attributed than small scale events where data may be more scarce and climate models are less likely to be able to simulate the event accurately at the moment.

A growing number of extreme weather events have now been partially attributed to climate change through these methodologies. This includes the East Africa drought in 2011, the Russion heatwave of 2010, the European heatwave of 2003 (PDF), and the floods in England and Wales in 2000.

In the latter report, 2 of the 20 case studies examined the extreme rainfall over south east Australia in 2011 and 2012. Peterson summarises the results of these two studies in the BAM report conclusion:

"one assessment of seasonal changes in heavy five-day precipitation events in Australia finds little modeled evidence of long-term changes in such events once ENSO is factored in, while another analysis that examined the human influence on total monthly precipitation for March in roughly the same area found that it increased the probability of above average rainfall by 5%–15% (“Limited Evidence of Anthropogenic Influence on the 2011–12 Extreme Rainfall over Southeast Australia” and “An Attribution Study of the Heavy Rainfall over Eastern Australia in March 2012” in this report). These differences arose despite the two analyses having an author in common. However, the bottom line of the event attribution was basically the same: that the heavy rain last year in eastern Australia was predominately due to natural variability. But for rare events, the results of these analyses of Australian rainfall illustrate how attribution studies that examine the effects of human influences on an extreme event can be dependent on both the methodology used in the assessment as well as the choice of metrics.

Sophie Lewis contributed to one of the papers examining 2012 extreme rainfall in south east Australia and explained her results for this study on her blog:

"The results of my earlier work have been varied. While we found a strong human influence on our record hot, ‘angry’ Australian summer, we found little evidence for human influences on the record heavy rainfall that fell in Australian in 2011."

2013 temperatures not found in 13,000 model years of simulations 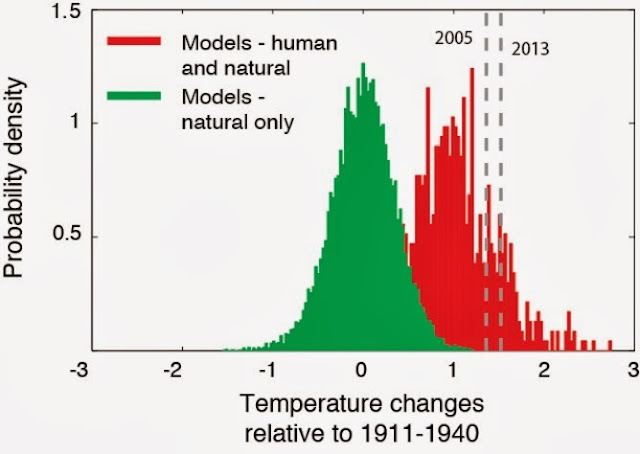 Caption: Probabilities of annual average temperatures for Australia from climate model simulations including natural influences only (green) and both natural and human climate influences (red) for model years 2006-2020. The vertical lines show the temperature anomalies observed in 2013 and in 2005 (the previous hottest year observed). Source: David Karoly & Sophie Lewis/The Conversation

Lewis described the most recent results on the record hot year for Australia as "stunning" on her blog entry for January 6 2014 - Australia’s tumbling temperature records of 2013.

In the model experiments of our hypothetical world without human influences, it is impossible to reach a temperature like the record we broke in 2013 due to natural climate variations alone. In these simulations with only natural factors, none of the nearly 13,000 model years that we investigated exceeded our previous hottest year for Australia, recorded back in 2005.

In stark contrast, in the other set of model simulations that include both natural and human factors (such as increasing greenhouse gases) record temperatures occur approximately once in every ten years during the period 2006 to 2020.

Clearly natural variability and climate change both play significant roles in extreme weather events, but the Lewis and Karoly results of studying the Australian 2013 temperatures indicates that "The 2013 event is outside the bounds of natural climate variability."

The results clearly show that the Australian Government needs to increase mitigation action to counter climate change in the long term, as well as fund climate adaptation program for the near-term to cope with rising temperatures, increasing frequency and intensity of heatwaves, and the greater threat of bushfires.

We need the carbon price in place, and in fact need to boost this price, as well as supporting the Clean Energy Finance Corporation in increasing business investment in renewables. 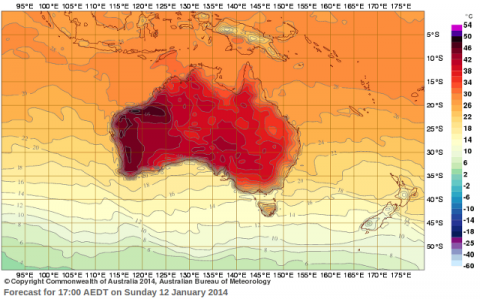