Maurice Newman, Tony Abbott's chief business advisor, was cursed at the Eureka Dawn Vigil on December 3 when an effigy of him was burnt.

Lantern, banner and effigy maker Graeme Dunstan selected Prime Minister Tony Abbott's chief business advisor Maurice Newman as the candidate for an effigy to be burnt at the 2013 Eureka Dawn vigil on December 3 in Eureka Park at Ballarat.

Newman has been appointed chairman of the Prime Minister's Business Advisory Council. He wants to see savage attacks on the wages and conditions of the Autralian working class and holds strong climate denialist views. Read the article by Graham Readfearn on Australia's New Prime Minister Surrounded By Climate Science Denying Voices and Advisors

This is the statement that Graeme Dunstan made in setting alight the effigy.

"And of course he is a climate denialist. He speaks for the energy industry.

So let this be a curse. Yeah? Let it be the curse of the ancestors against this man who walks the corridors of power and sits at the tables of the rich.

Let him go to bed at night and know that he has the curse of Eureka upon him.

Let him know that this curse is already carried by generations yet unborn who are going to suffer the consequences of the lack of action on climate change.

Let him be consigned to the flames. May he wake in fright." 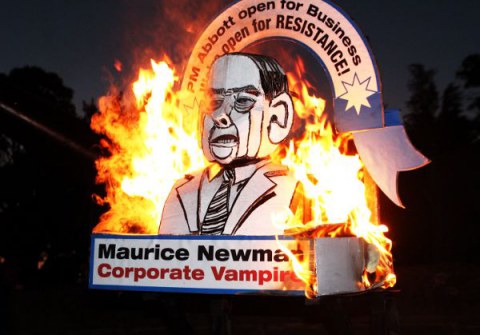