Everyone in the Territory doing well except for Aboriginal peoples

By Gerry Georgatos - August 24th, 2013 - During Prime Minister Kevin Rudd’s recent whirlwind election stop in the Top End he highlighted the average age of death of the Northern Territory’s Aboriginal peoples – 52 years. This is the nation’s worst.

But despite the Prime Minister’s claims that life must be tough in the Northern Territory and his suggestion that Territorians should be granted various further tax exemptions on the premise that the Territory is somewhat akin to living in the remote, devoid of comparative infrastructure as seen in for instance NSW, WA, his base assumptions when checked against data from Government departments, including the Australian Bureau of Statistics (ABS), evidences otherwise. The evidence points to a flourishing Northern Territory, with the strongest per capita economic growth in the country – but not for its Aboriginal peoples.

While in Darwin, the Prime Minister said to the press, “Anyone who lives in the Territory who believes that there is a level playing field with the rest of the country I think has got rocks in their head.”

According to the ABS, the infant mortality rate among the Territory’s Aboriginal peoples is 13 deaths per 1000 live births while for non-Aboriginal Territorians it is 4 per 1,000.

Prime Minister Rudd is correct about life being hard in the Northern Territory but he needed to explain that this is the case not only for its Aboriginal peoples. The Territory’s economy is growing at twice the rate of Victoria and NSW. Its per resident economic growth rate is the nation’s highest but that the beneficiaries of this are the two-thirds of the population who are not Aboriginal. According to the ABS the Territory has the second highest gross household disposable income per capita, only the ACT beats it. 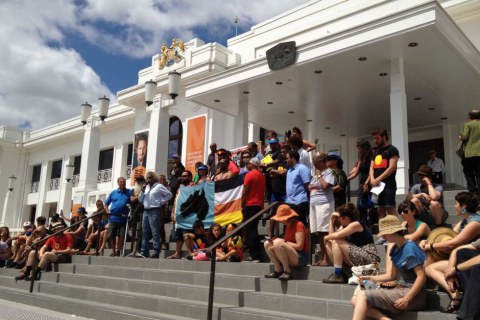