Welcome to The Stringer’s weekly newsletter - NEWS update: The Stringer went live February 20. Four months young The Stringer has been reaching a growing readership, nationally and internationally. In the three months since March 1, The Stringer on average has had 12,340 new visitors each month with May recording 15,072 new visitors.

The Stringer is always looking to expand our team. If you would like to become a regular contributor, or contribute an article, photographs, a radio or video news piece, we would be glad to hear from you.

What excuse will they come up with now?
17th July 2013 by Suresh Rajan
http://thestringer.com.au/what-excuse-will-they-come-up-with-now/#.UeoVf...

Culture should not be denied; change needs unfolding, not impost
15th July 2013 by Gerry Georgatos
http://thestringer.com.au/culture-should-not-be-denied-change-needs-unfo...

Mandela’s greatness may be assured but not his legacy
14th July 2013 by John Pilger
http://thestringer.com.au/mandelas-greatness-may-be-assured-but-not-his-...

There are scores more stories, localised, national and international, you can choose from to read – and share with others on The Stringer

The Stringer’s ‘Soundcloud’ lists an array of radio and audio interviews.

The Stringer recommends the 28 minutes audio from 3CR – The War on Iraq: 10 Years On

You can quickly find out more about Wheelchairs for Kids here, and here.

The Wheelchairs for Kids Foundation is always glad to receive donations of soft toys and rugs as each wheelchair is packaged with a soft toy and a rug for each child. The Foundation is always ready to welcome new members to our knitting group, please phone us at the factory on 9409 3633 if you’re interested in joining. The Foundation is also always glad to receive donations of wheelchairs. Wheelchairs for Kids is run out of a factory in Perth, Western Australia, the address of which is 45 Dellamarta Road, Wangara 6065. Donations of toys, blankets and wheelchairs can be made by delivering or posting the articles to this address. Our volunteers staff the factory Monday to Friday (except Thursdays) - the best time to drop off donations is between 9 and 11am.

Please know that your feedback on The Stringer is always more than welcome. 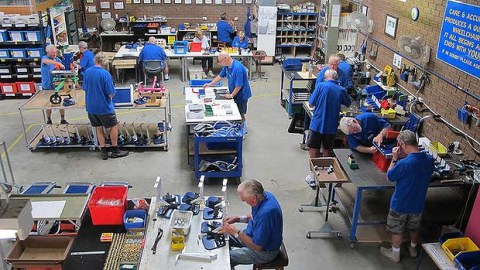