Today Friends of the Earth release a damning report of the track record of military uses of the environment and the risks US bases and exercises pose to our natural heritage.

The report US Bases in Australia: the social and environmental risks lists the numerous locations that the US military will increasingly use on Australian soil, and comes on the heels of the commencement of the world's biggest US-Australian war games in Shoalwater Bay near Yeppoon in Queensland.

One of the report authors, Kim Stewart, says, “The military recognise the environmental values of the areas in which they train. But this does not stop them conducting live firing in areas where endangered species live, or using munitions and equipment that destroy habitat and contaminate into the future.”

“Military exercises are not required to submit Environmental Impact Assessments. Defence instead produce a Public Environment Report with no legal standing – a green washing exercise.

“The increasing presence of US military in Australian locations, such as the Talisman Saber biennial joint exercises, and the stationing of US military personnel in Darwin and elsewhere, pose grave environmental and social threats.

“The US defence forces have an abysmal record of pollution and destruction of the environment world-wide. They have a raft of exemptions from their own country’s environmental protection legislation. 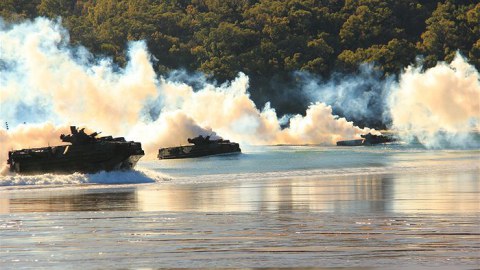