What future does this little boy have? 5 hours ago the first car bomb was detonated in Samawa

I woke this morning to a message and photo from Samawa, Iraq, hometown of my good friend Riyadh Al-Hakimi. Riyadh came to Australia in 1993 as a child refugee with his family fleeing the prospect of persecution. We met at university, I was the general manager of a Student Guild and coordinator of Students Without Borders and Riyadh was an international relations student, now graduated.

He asked me if I could help raise funds for wheelchairs to be sent to Iraq to help those without, those far too many. Indeed we have been doing this for years. We have sent more than 1100 wheelchairs to children in Iraq. Thousands more wait.

A couple of years ago Riyadh returned to Iraq to help his people. He works with Government. He could have stayed here and made a good quid and a good life. But the Riyadh I know would give the shirt off his back if asked.

This morning I woke up to a message and photo from a devastated Riyadh.

Yes, bombings are near daily in Iraq, especially in Baghdad, but five hours ago the first car bomb was detonated in his hometown of Samawa - killing four and injuring 27.

The photo is of a little boy, I don't know his age, maybe three or four or five. What future now is there for this little boy? What is his future? What do we tell him? Who tells him?

My outrage urged me send a media release around the country but this would have been forlorn. The photo as disturbing and wrenching as it is should be on the front page of every newspaper in our nation this morning, this day, on all the news.

What do those who brought on war and civil strife have to say?

I am the volunteer manager of the Wheelchairs for Kids Foundation and we will continue to send wheelchairs but is this the future without any respite, is this what we will need to chase everyday for the rest of lives? 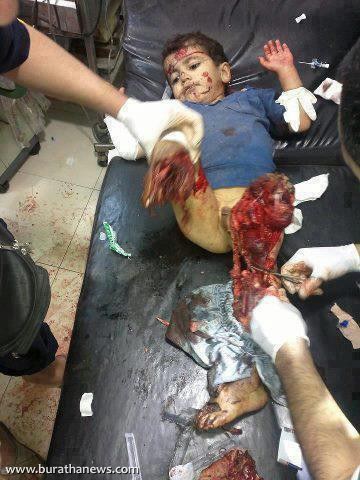