Melbourne 22 May 2013: The Australian government has separated 14 Sri Lankan Tamil asylum seekers, 4 men, 3 women and 6 children (including a 6 month old baby), who arrived by boat and were detained in a remote immigration detention centre in Christmas Island from other asylum seekers and have informed them that:

a/ They are not going to be allowed to make an application for asylum.
b/. They are going to be forcibly deported to Sri Lanka.

They will be taken by force to a military plane and flown to Sri Lanka at 9.30 am Christmas Island time (12.30pm Melbourne time)

We have emails and phone calls from these people seeking urgent legal assistance to apply for protection on grounds that they fear being returned to Sri Lanka.

Australia has refouled* more than 1000 asylum seekers to Sri Lanka in the last 6 months in this manner. ie they have deported these asylum seekers without allowing them apply for asylum and giving them access to legal representation.

We now have proof that there are approximately 330 people locked up in Negombo prison who have been returned from Australia, including 30 people imprisoned last week from the 100 plus who were deported. We have spoken to sources within the prison who have confirmed that this is so.

Some people are being released on "human bail". This requires a member of the family to go to Colombo and sign documents agreeing to pay money and post themselves for imprisonment if the person released on bail, disappears or tries to leave the country. It is now a crime for people on lists to leave Sri Lanka even if they have a valid passport and paid airline ticket.

These 14 people have sent emails requesting both legal support and advice and stating clearly that
"If I go back to Srilanka I will be tortured or be killed by the Sri Lankan authority. I have evidence and documents to prove my claim to seek protection in Australia. "

An urgent injunction was sought tonight in a Melbourne Court to restrain removal of 14 Tamil asylum seekers on Christmas island.
The injunction was granted for 24 hours until 6.30pm Melbourne time tomorrow .
The Court will convene again tomorrow at 2.30pm to hear this and other matters regarding access to legal advice.

A mother, father and two small children were deported today on an RAAF flight from Christmas Island to Colombo. We do not know who else if anyone was on the plane.
It would be extraordinary if the 124 seat plane only had two adults and two children aboard.

The principle of "refoulement" was officially enshrined in the 1951 Convention Relating to the Status of Refugees and is also contained in the 1967 Protocol and Art 3 of the 1984 Torture Convention.

The principle of non-refoulement arises out of an international collective memory of the failure of nations during World War II to provide a safe haven to refugees fleeing certain genocide at the hands of the Nazi regime. Today, the principle of non-refoulement ostensibly protects recognized refugees and asylum seekers from being expelled from countries that are signatories to the 1951 Convention or 1967 Protocol. This has however not prevented certain signatory countries from skirting the international law principle and repatriating or expelling bona fide refugees into the hands of potential persecutors. 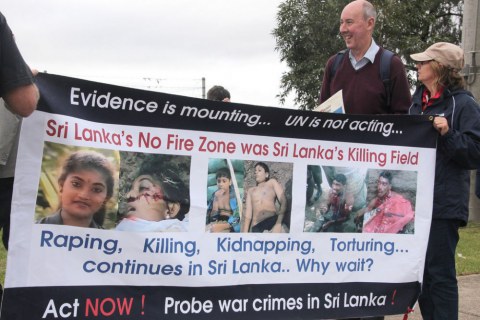