For the first time scientists have demonstrated the impact of climate change on ocean warming and sea surface temperatures affecting global fisheries stocks. Previous studies were limited to individual fisheries. The changes have been occurring clearly since the 1970s, the scientists say. The implications of this research raises the need for timely changes in fisheries management practices and adaptation plans for communities dependant on fishing, particularly climate vulnerable developing countries in the tropics.

"Given global fisheries contribute hugely to the world's economy and food security, this is a significant finding," said co-author Dr Reg Watson from the University of Tasmania's specialist Institute for Marine and Antarctic Studies."We are no longer talking about future hypotheticals - we are talking about impacts on a global scale that we can already demonstrate."

Previous research by Dr Watson published last year demonstrated that marine fishes are now smaller in size. "Last year we showed that one of the consequences of climate change and excessive fishing is that globally marine fishes are smaller," said Dr Watson.

The paper - Signature of ocean warming in global fisheries catch - was published in Nature on 15 May 2013. The study was lead by Assistant Professor William Cheung, University of British Columbia, with collaboration from Professor Daniel Pauly and Dr Reg Watson.

I wrote about a related issue on the Velocity of climate change imperiling ocean diversity, particularly with regard to Australia, in January 2012.

Study co-author Dr Daniel Pauly, a world renown marine biologist and fisheries scientist, commented "We've been talking about climate change as if it's something that's going to happen in the distant future - our study shows that it has been affecting our fisheries and oceans for decades. These global changes have implications for everyone in every part of the planet."

Dr Pauly is principal investigator with University of British Columbia's Sea Around Us Project. In December 2012 he visited Australia and in a radio interview with the Australian Broadcasting Corporation urged that governments should be putting their economies on a 'war footing' to fight climate change. 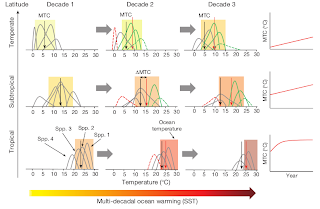 As sea surface temperatures (SSTs) rise fish respond by moving either deeper or to higher latitudes. This was shown clearly in events like the 2011 Western Australian Extreme Marine Heatwave, as well as the steady increase in numbers of sub-tropical fish being caught in temperate fisheries.

In the tropics the catch followed a reducing trend in the 1970s before stabilising. The scientists postulated this is because there are no species with high enough temperature preferences to replace those that declined. The problem for the tropics in future is when continued warming reaches a level that exceeds the thermal tolerance of tropical species, communities dependant on fishing will see a substantial declines in catch. As fish is a major source of protein in some of these countries, the necessities of adapting to different foods and the impact on agriculture will be huge.

"One way for marine animals to respond to ocean warming is by moving to cooler regions," said the study's lead author William Cheung, from UBC's Fisheries Centre. "As a result, places like New England on the northeast coast of the U.S. saw new species typically found in warmer waters, closer to the tropics. "Meanwhile in the tropics, climate change meant fewer marine species and reduced catches, with serious implications for food security."

The study authors calculated an index - the mean temperature of the catch (MTC) - and examined 698 exploited species in most of the world's productive coastal areas or large marine ecosystems.

"Our results show that, after accounting for factors like increased fishing and large-scale marine variability, the global MTC increased at a rate of nearly 0.2 degrees Celsius per decade between 1970 and 2006, and for non-tropical MTC increased at a rate over 0.2 degrees Celsius per decade," said Dr Watson. "Essentially these findings demonstrate that the distribution of fish stocks has already shifted, with an increase in the number of warmer-water fish being caught globally, particularly in non-tropical areas." 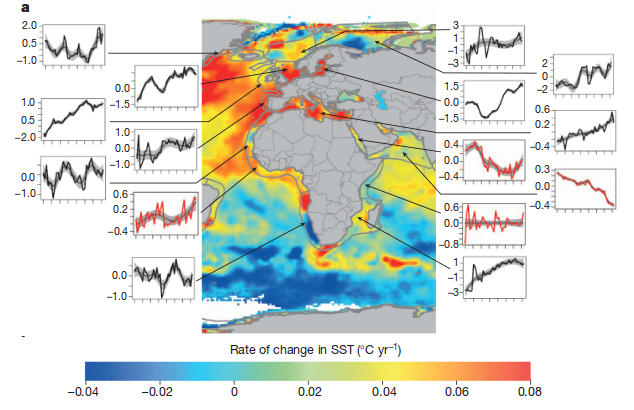 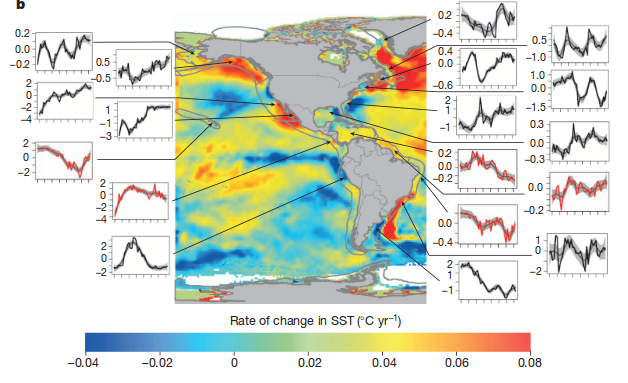 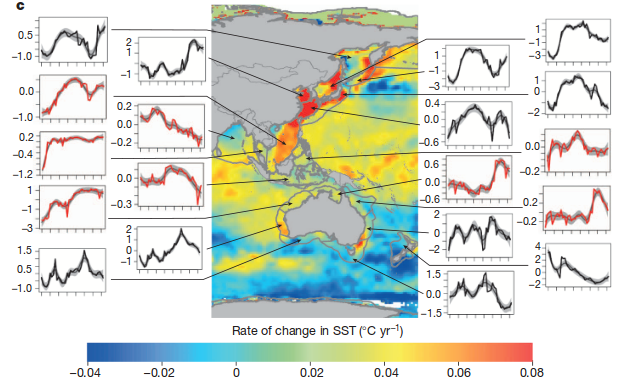 The authors draw some conclusions with strong implications for food security, particularly for fishing dependant communities in climate vulnerable developing countries in the tropics:

"Overall, our results suggest that change in the composition of marine fisheries catch is significantly related to temperature change in the ocean, with an increasing dominance of catches of warmer waters species at higher latitudes and a decrease in the proportion of catches of subtropical species in the tropics. Such changes in catch composition have direct implications for coastal fishing communities, particularly those in tropical developing countries, which tend to be socio-economically vulnerable to the effects of climate change."

"Continued warming in the tropics to a level that exceeds the thermal tolerance of tropical species may largely reduce catch potential in this region. This highlights the need to prioritize resources to develop adaptation plans immediately to minimize impacts on the economy and food security of tropical coastal communities."

With industrial scale floating fish factories over exploiting fisheries, and many illegal trawling operators operating outside fisheries catch quotas, is it any wonder that quite a few fisheries have collapsed. See for example the management of Southern Blue Fin Tuna, a fishery that is slowly recovering after over exploitation.

"Now that new light has been shed on the impact of climate change on global fisheries, timely changes in management practices are needed and the development of adaptation plans is a must," concluded Dr Watson.

Watch a brief youtube video from July 2012 of Dr. Edward Allison of the World Fish Center giving a presentation on the impacts of climate change on coastal and fishing communities and the necessity for adaptation.

Takver Takvera is a citizen journalist from Melbourne who has been writing on Climate Change issues and protests including Rising Sea Level, Ocean acidification, Environmental and social Impacts since 2004. 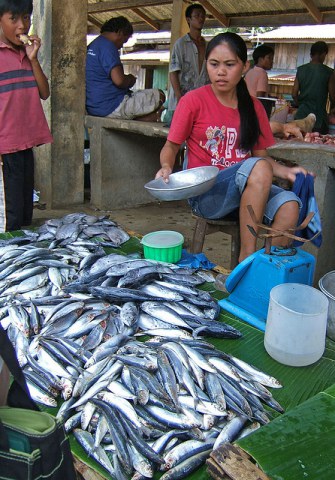