To most of us, what is hidden beneath the waves of our coastal environment remains invisible and is little thought about or cared about. Yet seagrass meadows, though hidden from our direct view, contribute valuable ecological services supporting valuable fish nurseries, as food for dugongs and turtles, and as a highly efficient blue carbon sink sequestering carbon.

A new study of the seagrass meadows in Moreton Bay, Queensland found that a significant proportion of valuable seagrass habitats would be lost without action to offset the affects of climate change. "The area of seagrass habitat was predicted to decline by 17% by 2100 under a scenario of SLR of 1.1 m." said the study.

Sea level is expected to rise by one meter or more by the end of the century, which reduces the amount of sunlight reaching the seagrass on the bottom, reducing it's capacity to undertake photosynthesis and affecting it's distribution.

The study investigated in particular what would happen if roads, houses and other developments along inundated coastlines retreated landwards with rising seas and found this scenario reduced the decline of seagrass to just five per cent over the same period.

Another offset to improve seagrass growth would be measures to improve water clarity, allowing sunlight to penetrate deeper. Better sewerage treatment, planting out and protecting riverbanks, and reducing run-off of harsh chemicals such as fertilisers would all improve water quality and clarity.

"A scenario including the removal of impervious surfaces, such as roads and houses, from newly inundated regions, demonstrated that managed retreat of the shoreline could potentially reduce the overall decline in seagrass habitat to just 5%. The predicted reduction in area of seagrass habitat could be offset by an improvement in water clarity of 30%. Greater improvements in water clarity would be necessary for larger magnitudes of SLR." said the study.

Dr Peter Macreadie from the Australian Research Council DECRA Fellow and a seagrass expert with the University of Technology, Sydney (UTS), commented on the study in an article on The Conversation website: "My colleagues and I at UTS predict, based on recent global estimates of seagrass decline, that if nothing is done to halt seagrass decline there will be none left in 50 years time," he said. "And that doesn't take into account the effects of climate change; we just hit 400 ppm atmospheric CO2 for the first time in human history. The last time that happened was three million years ago, and it caused sea temperatures to go up by about 5 degrees Celsius and sea levels to rise as much as 40 metres."

Professor Carlos Duarte, Director of the University of Western Australia's Oceans Institute, called the new study study a useful tool for coastal environment managers to evaluate remedial actions for seagrass meadows, "Whereas most studies have documented losses, this study takes a different approach at apportioning the stresses on seagrasses and projecting future losses in response to different scenarios, which is where the strength and innovation of the study rests," said Dr Duarte. "Seagrass ecosystems are the ugly ducklings of marine conservation, yet they play key roles in sequestering CO2, protecting our coastlines and maintaining biodiversity."

At the same time as the publication of this Moreton Bay study - Coastal retreat and improved water quality mitigate losses of seagrass from sea level rise in Global Change Biology, the Blue Carbon International Scientific Working Group was conducting a 3 day workshop in Sydney. The Blue Carbon Initiative is a global program led by Conservation International (CI), the International Union for Conservation of Nature (IUCN), and the Intergovernmental Oceanographic Commission of the United Nations Educational Scientific and Cultural Organization (IOC-UNESCO).

The workshop discussed how blue carbon can fit into research and conservation opportunities in Australia and the Coral Triangle – the tropical marine waters of Indonesia, Malaysia, Papua New Guinea, Philippines, Solomon Islands and Timor-Leste. The group will also discuss the latest seagrass research and visited local seagrass and tidal marsh areas near Botany Bay.

At the workshop Professor Peter Ralph, the executive director of the Plant Functional Biology and Climate Change Cluster at the University of Technology Sydney, told VOA News that coastal areas can play an important role in mitigating the effects of climate change.

"An acre of seagrasses is equivalent to 40 acres of terrestrial forest, so these are very small areas. Okay, seagrass, saltmarsh and mangrove represent only 2 per cent of the ocean sea floor, but they bind and hold 50 per cent of the marine ocean’s sediment carbon," Ralph explained. "So it is a very, very small habitat but we need to recognize this and protect it so that we do not lose that carbon back into the atmosphere that has been stored for thousands of years.”

Unfortunately, the global destruction of coastal blue carbon habitats are proceeding at a rapid rate. "These critical ecosystems are being destroyed worldwide at a rapid pace — it’s estimated that this destruction releases as much as 1 billion tons of carbon dioxide each year into the atmosphere and oceans — almost the equivalent of Japan’s yearly emissions." said Professor Ralph.

Dr Emily Pidgeon from Conservation International also stressed the importance of blue carbon for climate mitigation. "It's only because of the science (involved) that we are are beginning to understand the richness and value of these systems to the carbon cycle, which underpins the question of climate change," she told AAP as reported in The Age newspaper.

But looking after the health of our seagrass isn't only a job for scientists. It is a job for all of us to make sure our waterways are kept clean of rubbish, reduce fertiliser and pesticide runoff, ensure riverbank vegetation is not cleared to maintain the quality of water flowing into coastal estuaries and wetlands. Here is a video of Mary River Catchment Coordinating Committee members and staff dancing to Peter Oliver's Dugong Rock, part of a 2011 competition to raise awareness of the importance of seagrass meadows. 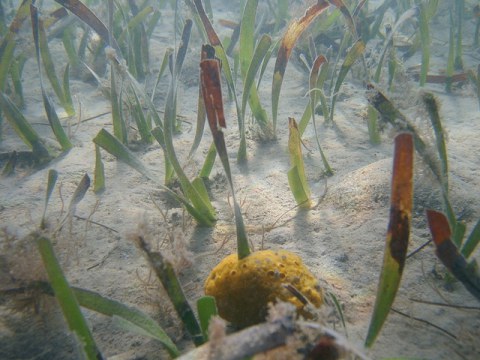