Alex Smith of Radio Ecoshock interviews John Connor, Exec. Dir. of the Climate Institute in Sydney. Their new report shows the Australian coal industry can only burn a fraction of their reserves before the climate spins out of control. The big coal companies are over-valued, based on reserves that are "unburnable" - a big risk for the Australian economy. Listen to/download this 19 minute interview here: http://www.ecoshock.org/downloads/climate2013/ES_JConnor_LoFi.mp3

Any intelligent observer can see we are on a collision course between increasing mega-projects to produce even more coal, oil and gas - and the developing disaster of climate change. Either we make adjustments to our energy system, or we risk trying to live through the planet's sixth great extinction event, without going extinct ourselves.

Why do so many investors, likely including your pension fund, bank, or government - keep pouring billions and billions of dollars or Euros into a fossil fuel industry which has no long-term future? Everybody's making big money - but is it a bubble?

The Climate Institute, in co-operation with the non-profit group Carbon Tracker, published an analysis of Australian coal reserves, versus what could be burned as a global carbon budget keeping us under the dreaded 2 degree C rise in global mean temperature. That's the point at which huge positive feed-back loops are expected to kick in - taking us up to a non-survivable 8 degree C rise or more (plus over 28 meter sea level rise...)

For more info on the global picture, you can also listen to/download my interview with Bob Ward. He's the lead author of the report "Unburnable: Carbon 2013: Wasted capital and stranded assets." That's just released by Carbon Tracker and the Grantham Institute at the London School of Economics.

Is it just more blather? Apparently not: big institutions like HSBC bank, Citi Group, Standard and Poors, the World Bank and the IMF agree there is a risk the next financial crisis could erupt from this fossil "bubble". All the major exchanges are topped up by oil, gas, and coal companies who claim giant reserves of fossil fuels as though they are gold. But in reality, only a fraction of that can be burned. A devaluation of those reserves and companies is required.

In my interview with John Conner, we discuss the widely announced super projects where the Australian coal industry would build new ports, transport lines, and mega-mines. Conner points out the industry assumes an infinite market in Asia for coal.

BUT...China is already capping its coal use; China is developing large alternative energy resources in both solar and wind; and that country has popular demand to cut back on air pollution - which is mostly coal. Not to mention the possibility of a technological break through during the decade the Aussie expansion plan requires to come on stream. It's a bad bet, says Connor, for the superannuation and pension funds around the world, as well as the banks.

While governments flounder doing little or nothing, John Conner suggests the largest investors in the markets may force the change we have been looking for.

Meanwhile though, the coal companies, all too aware that global regulation is coming, may race to get as much coal out of the ground first - a perverse effect.

The Climate Institute report also found most of Australia's coal is now owned by foreign investors, not Australian corporations. Those actual owners may come under carbon regulations in their own countries, or suddenly withdraw investment for other reasons - another risk to the Australian economy. 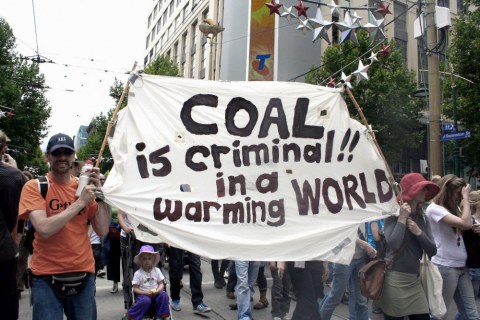